Tarlac farmers and their quest for justice 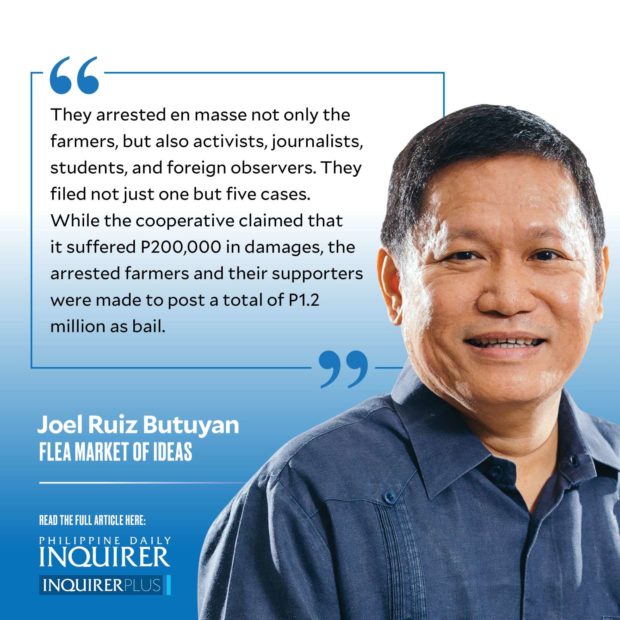 For almost three decades now, the Tarlac farmers who were arrested and jailed last June 9 have been fighting for their rights to disputed land. This has been admitted by no less than Department of Agrarian Reform (DAR) Acting Secretary Bernie Cruz. These farmers are among 236 agrarian reform beneficiaries who have been awarded 200 hectares of land in Concepcion, Tarlac, through a collective certificate of land ownership award (CCLOA) since the 1990s. The farmers’ names have been listed on the back of the CCLOA, confirming their rights to the land. They have been waiting for the issuance of their individual CLOA, and for the DAR to install them in possession of their respective plots of land.

While the farmers have become owners on paper, they are trespassers on the ground. Possession of the land is in the hands of a multipurpose cooperative that has been gainfully cultivating the land allegedly for the past 26 years. As to why this is so is sketchy.

With the assistance and participation of progressive groups, students, artists, and journalists, the farmers organized a “bungkalan,” where they attempted to cultivate a small portion of the disputed land. The farmers claim that they need to grow vegetables to stave off hunger for their families. But it was also clear that the event was doubly intended to dramatize and call attention to their plight.

Prior to the incident, in fact, the farmers gave notice to the DAR that they will be staging the “bungkalan” as their means of commemorating the 34th anniversary of the Comprehensive Agrarian Reform Program. A DAR undersecretary discouraged them from staging the event, even as he assured them that they will soon be installed into possession of the land. The farmers had enough of promises apparently, so they went on with their plans.

As the farmers and their supporters attempted to cultivate a symbolic half-hectare portion of the 200 hectares of land, policemen came and arrested them. They were charged with multiple crimes of malicious mischief, direct assault, disobedience and resistance to persons in authority, obstruction of justice, and illegal assembly.

The conflict between the farmers and the cooperative involves a dispute over private property. In my years of experience as a litigation lawyer, the police will normally just document the incident, and then advise the parties to file the cases against each other in court. Ordinarily, the police will not go out of their way to zealously get involved in the complicated and messy dispute of conflicting private rights by judging for themselves who among the parties has better private rights, and then implement their own judgment by effecting arrests. This should have been especially true in this case where the ownership rights of the farmers are based on law, while the possessory rights of the cooperative are most probably based on contract. The claim of the farmers is based on substantive law while the continuing entitlement of the cooperative to the land is grounded on procedural law.

The policemen became overeager in indiscriminately arresting a total of 91 individuals. They arrested en masse not only the farmers, but also activists, journalists, students, and foreign observers. They filed not just one but five cases. The arrested farmers and their supporters complained that they were jailed in a very cramped space. While the cooperative claimed that it suffered P200,000 in damages, the arrested farmers and their supporters were made to post a total of P1.2 million as bail.

There’s a very telling contrast in the way the law and the government have treated the multicooperative and the farmers. The cooperative complained of the deprivation of its rights to possession over the land, and it obtained the swift, full, and punitive protection of the law. The people it complained against were immediately arrested and jailed. In contrast, the farmers have been complaining about the deprivation of their ownership rights for almost 30 years now, but they’ve been told to wait, wait, and still wait. The people that the farmers have complained against have continuously enjoyed the fruits of the land.

The farmers have been indicted in court, but with their indictment, it is our country’s entire justice system that stands on trial.