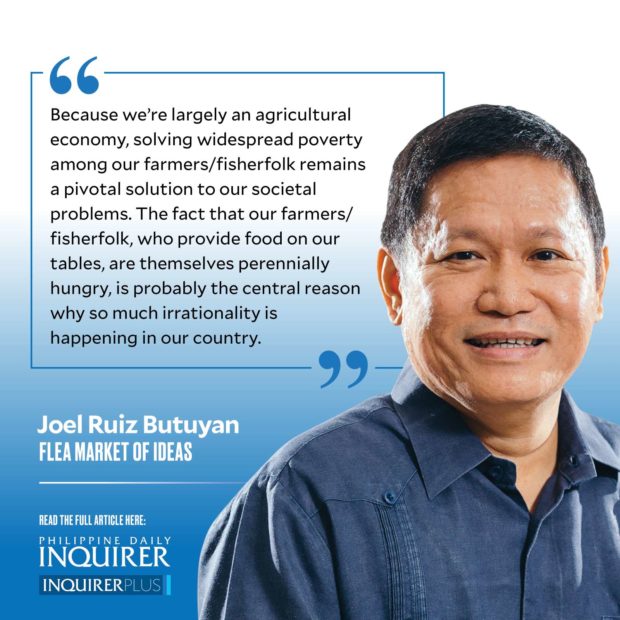 The most crucial of our country’s problems trace their roots back to our dysfunctional economy. Whether it be our political immaturity, pervasive illiteracy, rampant corruption, and cultural flaws, they’re all offspring of our economic woes.

Because we’re largely an agricultural economy, solving widespread poverty among our farmers/fisherfolk remains a pivotal solution to our societal problems. The fact that our farmers/fisherfolk, who provide food on our tables, are themselves perennially hungry, is probably the central reason why so much irrationality is happening in our country.

There are two big roadblocks preventing our farmers/fisherfolk from becoming prosperous.

First, the wealth that they produce are snatched by middlemen. Our farmers/fisherfolk produce the most vital of our necessities: food. But the prices paid to them for their wealth of harvest are dirt cheap, compared to the prices at which the same produce are eventually bought by end consumers. Our food producers end up with very thin or nonexistent profit, while fat profits are pocketed by middlemen. This, despite the fact that farmers/fisherfolk spend substantial capital, devote backbreaking labor, and assume heavy losses caused by natural calamities.

Second, farmers are prevented from abandoning unprofitable crops and shifting to more valuable ones because they don’t have access to buyers of the latter. We have millions of yellow corn farmers who continue planting this unprofitable animal feed because there are ready buyer-traders in every town corner. The crop at least generates guaranteed cash flow every year that pays for subsistence living. In contrast, we’ve seen news pictures of farmers who shifted to high-value crops, but their bumper harvest of tomatoes, squash, and fruits have been left to rot by the roadside for lack of buyers. Fisherfolk are also prevented from shifting to more gainful marine ventures because they don’t have access to buyers.

Widespread poverty among food producers while vast fortunes abound among middlemen attest to the fact that our country’s farmers/fisherfolk are left to fend for themselves and are abandoned at the mercy of traders. Government interventions like the setting up of the National Food Authority, which was intended to give higher farm prices for farmers, have failed.

Vice President Leni Robredo has a program of linking farmers to sell their produce directly to restaurant chains and food processors, leading to higher income for farmers. The incoming administration of Ferdinand Marcos Jr. should adopt and expand this program because it does away with government subsidy and taps into the sense of social responsibility of business groups.

Our municipal government in Alcala, Cagayan has embarked on a program that may be worth emulating for other local government units (LGUs). Alcala directly purchases the produce of its peanut and white corn (for human consumption) farmers, at prices higher than those paid by traders. Our municipality turns them into processed food products (corn coffee, cornick, peanut butter, baked and roasted peanuts), which it then utilizes as food provision in its public events, distributes them as part of relief goods during calamities, and sells them as the town’s bannered products. In addition, Alcala has linked up with major food processors for their direct purchase of its farmers’ products.

The practice adopted by Alcala finds support in the Sagip Saka Act (Republic Act No. 11321), a 2019 law authored by Sen. Francisco Pangilinan, which empowers LGUs to directly purchase from farmers and fisherfolk, exempt from the bidding requirements of government procurement.

Government programs to help farmers/fisherfolk have largely been concentrated on giving them capital and technical subsidies to help them increase their outputs. But even if they produce bumper harvests/catch, there will be no upliftment of lives if they remain at the mercy of traders.

There must be relentless efforts to help our food producers directly sell their outputs to end consumers and food processors. LGUs must step into the plate and immunize its farmers and fisherfolk from the predatory practices of middlemen and traders.