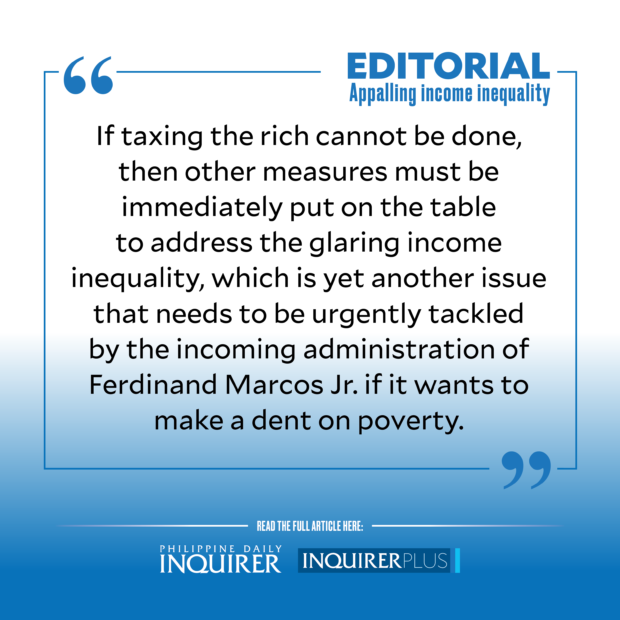 Over the last two years when much of the world buckled under the weight of the unprecedented economic and public health crises spawned by the COVID-19 pandemic, a billionaire was born every 30 hours, about the same rate at which a million could plunge into extreme poverty this year due to skyrocketing prices of basic goods and services.

Global charity Oxfam International painted this grotesque picture of “extreme, new levels” of income inequality in its latest brief “Profiting from Pain” released this week, just as around 2,000 of the world’s richest and most influential policymakers gathered in person for the first time in two years for the World Economic Forum summit in the ultraexclusive Swiss resort town of Davos.

Oxfam’s study showed the “incredible surge” in the fortunes of the world’s billionaires, whose combined wealth rose more in the first 24 months of the COVID-19 pandemic than in 23 years combined to $12.7 trillion, with their ranks swelling by 573 from 2020 to just shy of 2,700.

Indeed, the world’s 10 richest men now own more wealth than the bottom 40 percent of humanity or 3.1 billion people. In sharp contrast, Oxfam expects 263 million more people will crash into extreme poverty this year—or be forced to live on less than $1.90 a day—equivalent to a million every 33 hours.

“Meanwhile, decades of progress on extreme poverty are now in reverse and millions of people are facing impossible rises in the cost of simply staying alive,” lamented Gabriela Bucher, executive director of Oxfam International.

Such appalling income inequality is seen in the Philippines as well, where the combined wealth of the country’s 50 richest people surged despite the crippling pandemic by 30 percent to $79 billion or about P4 trillion in 2021, according to Forbes Asia. And their net worth rose even more in 2022 when the number of Filipino billionaires also increased to 20 from 17.

And as their already massive wealth ballooned further, the level of poverty worsened.

National Statistician Dennis Mapa also reported late last year that because of the prolonged pandemic that shed jobs and livelihood, combined with rising consumer prices on surging oil prices, around four million more Filipinos became poor in the first half of 2021, bringing the total to 26.14 million poor Filipinos and raising the poverty incidence to 23.7 percent from 21.1 percent in the same period in 2018.

The gap between the haves and the have-nots who live below the poverty threshold of P12,082 a month for a family of five cannot be allowed to widen further, as pervasive inequality ultimately causes the gross domestic product to decline over time, according to a 2015 study by the International Monetary Fund.

And more disturbingly, rising inequality can cause citizens to lose confidence in institutions seen as instruments that favor the rich, thus eroding social cohesion and confidence in the future.

For Oxfam, the “single most urgent and structural action that governments must take now” to address the festering problem is to tax such massive wealth, and use the collections to invest “in powerful and proven measures that reduce inequality, such as universal social protection and universal health care.”

The progressive Makabayan bloc in Congress filed late last year the proposed Super-Rich Tax Act of 2021 that will impose an additional wealth tax of 1-3 percent on assets exceeding P1 billion. It estimated that by taxing the 50 richest Filipinos alone, the government will be able to immediately collect some P240 billion that can be funneled into antipoverty measures to shrink the gap between the rich and the poor.

Unsurprisingly, the proposed measure did not get off the ground, with the Department of Finance thumbing down the bill and warning legislators that such a measure will drive out desperately needed capital and investments from the Philippines.

If taxing the rich cannot be done, then other measures must be immediately put on the table to address the glaring income inequality, which is yet another issue that needs to be urgently tackled by the incoming administration of Ferdinand Marcos Jr. if it wants to make a dent on poverty.

Former US president Barack Obama said as early as 2013 that this increasing polarization, where the rich are getting far richer as the poor are getting even poorer, is the “defining challenge of our time” and one that Marcos will hopefully have the will to address.