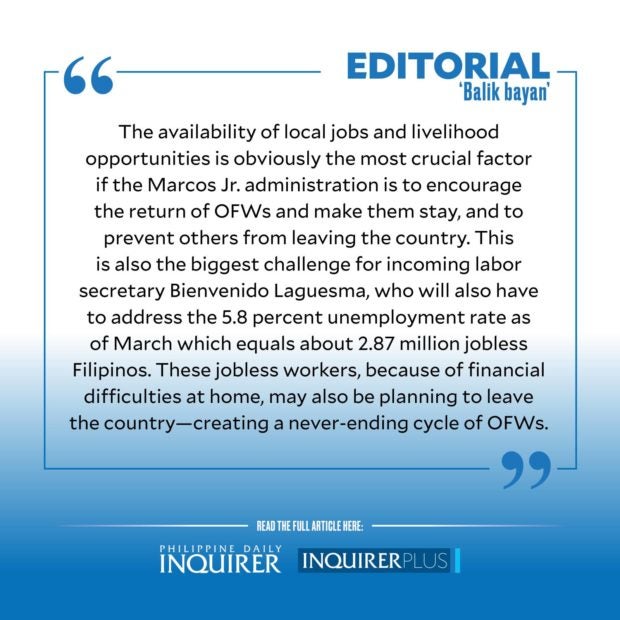 The outgoing labor secretary has called on overseas Filipino workers (OFWs) to leave the greener pastures that they have sought out abroad to make their lives better, and come back home to the Philippines instead.

In a separate message posted on the website of the overseas labor office of the Philippine Embassy in Tokyo, Bello praised OFWs for their sacrifices, perseverance, and diligence, as well as for their help, through remittances, in keeping the country afloat especially amid the COVID-19 pandemic when millions were left jobless.

Bello added that the government was grateful but that such gratitude can only be repaid by “[working] doubly hard to ensure that soon, no father or mother; no son or daughter would be away from home just to make a living for their families.”

Majority of Filipinos who migrated abroad have been fueled by their desire to find jobs that will give them better financial incentives compared to those available locally. In the 1970s, then President Ferdinand Marcos Sr. institutionalized a policy meant to encourage labor migration to help boost the economy. Then in 1972, when martial law was declared, more middle-class Filipinos chose to leave the country. Despite safeguards instituted by the government over the years, however, many of these economic migrants remain vulnerable to exploitation and abuse by their foreign employers, ranging from contract violations, sexual harassment, violence, and discrimination.

Still, these problems did not stop the waves of emigration with hundreds of thousands of Filipinos leaving the country every year—domestic helpers, seafarers, entertainment workers, nurses, and other professionals. Many of them also return home—some due to retirement, end of contract, or to escape oppressive conditions, some in wooden boxes. Today, there are about 1.77 million OFWs, according to 2020 data from the Philippine Statistics Authority. Of this number, 85 percent or 1.5 million OFWs registered to cast their votes in last month’s crucial elections.

Ironically, Ferdinand “Bongbong” Marcos Jr., son and namesake of Marcos Sr. whose rule spurred the wave of emigration in the 1970s, won the OFW votes by a landslide: 475,982 or 31 percent of the votes compared to 139,798 for his closest rival, outgoing Vice President Leni Robredo. During the campaign, Marcos Jr. promised more jobs and livelihood programs for returning OFWs.

The availability of local jobs and livelihood opportunities is obviously the most crucial factor if the Marcos Jr. administration is to encourage the return of OFWs and make them stay, and to prevent others from leaving the country. This is also the biggest challenge for incoming labor secretary Bienvenido Laguesma, who will also have to address the 5.8 percent unemployment rate as of March which equals about 2.87 million jobless Filipinos. These jobless workers, because of financial difficulties at home, may also be planning to leave the country—creating a never-ending cycle of OFWs.

“I would make my pitch for more local employment. Because as I oversee overseas employment as providing us the needed foreign exchange remittances, I also look at the social costs that go with it—separation of family, too much dependence on foreign remittance, spending more than what you are actually earning and not saving for the future … my mission should be to promote and create … more employment opportunities so that our workers will have an option really of choosing to stay with their families,” Laguesma said.

He has his work cut out for him as several factors—inflation, high fuel prices, the lingering effects of the pandemic on businesses—will certainly impact the job market. Even as the tourism, service, and manufacturing industries are slowly recovering from pandemic slump, businesses are still wonky on their feet, creating an unstable and unsecured environment for workers. Not exactly an enticing prospect for OFWs. The outgoing administration’s reintegration program did provide livelihood assistance to more than 140,000 OFWs and training to more than 150,000 during its term.

OFW remittances, which hit an all-time high in 2021 at $34.88 billion despite the pandemic, undoubtedly buttress the economy, but the social costs of broken families and neglected children are even bigger. Will the Marcos Jr. administration give weight to Bello’s call for OFWs to come back for good? If the huge mandate that the OFW community gave Marcos Jr. is reflective of their confidence that his administration can provide better jobs so they can finally return home, literally “balik bayan,” then it is a huge responsibility and a challenge for the Marcos Jr. administration to fulfill the aspirations of our valiant OFWs.