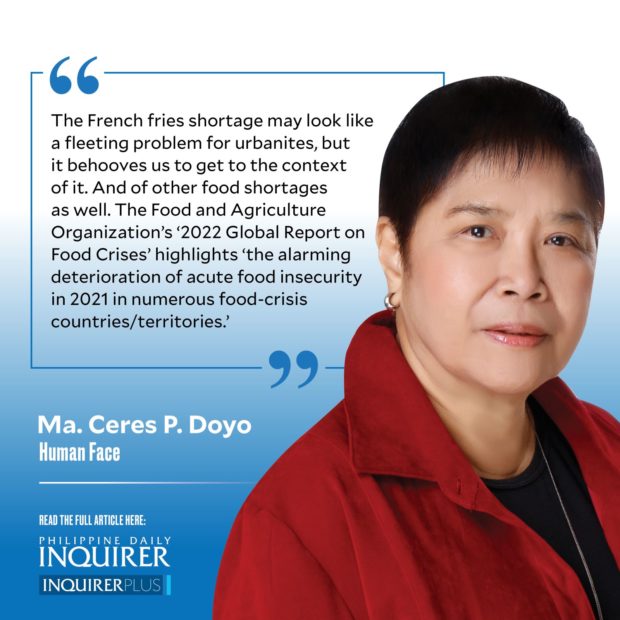 I have not checked it out myself, but word has gotten around that orders of French fries in some fast-food joints are now limited to medium size, not large. In other words, you are allowed to eat only so much, leave some for the others. The high-calorie fast-food item is not yet, altogether, a rarity that consumers will form queues for, but its limited supply could be a harbinger of things to come.

A week or so ago, baby milk formulas flew off the shelves in US supermarkets and drugstores. There was a shortage. Parents of infants dependent on these products were in panic when they found shelves empty and had nowhere to go. Which made me think, haven’t these parents heard of breast milk and breastfeeding? Well, so much for societies where breastfeeding in public is sometimes frowned upon as if it is indecent. But that is another story.

As to the French fries that are in short supply hereabouts, Filipinos gobble them up like they do potato chips in all flavors. But the Philippines is not potato country, in the sense that most of us cannot tell one variety from another. We buy only whatever potatoes are being sold for use in our Spanish-style potajes and American- and Russian-style potato salads. Filipinos did not go through the “Great Potato Famine” that Ireland did, something which, I read, was more politically induced and not simply an agricultural catastrophe.

I am not a regular meat eater, but when, once in a blue moon, I crave for and cook corned beef hash, I use our native kamote or sweet potato (P60-plus per kilo the other day), instead of the regular spud to go with the carne norte. It just tastes more delicious to me.

Are these shortages, indeed, harbingers of things to come? Our agriculture experts should have ears on the ground and be ready to support our local food producers who seem to be always last in the government’s priorities. They get by on their own to face challenges brought about by climate change, or with some help from nongovernment organizations. Else, why do we often hear that our food providers are among this country’s neediest and hungriest?

The Cordillera region is known to be the Philippines’ biggest potato producer (I don’t know what variety), but are their potatoes the kind that are julienned and frozen for fast-food chains to use? McDonald’s reportedly uses some 3.4 billion pounds of potatoes worldwide annually. I hope McDonald’s will try our Philippine-grown potatoes.

The French fries shortage may look like a fleeting problem for urbanites, but it behooves us to get to the context of it. And of other food shortages as well.

The Food and Agriculture Organization’s “2022 Global Report on Food Crises” highlights “the alarming deterioration of acute food insecurity in 2021 in numerous food-crisis countries/territories. Nearly 193 million people were in crisis or worse … as a result of intensified conflict, significant economic shocks and some of the most severe weather extremes in recent years, or a combination of these drivers.” According to the United States Institute of Peace, the (Russian-instigated) war in Ukraine is deepening global insecurity. But “even before Russia invaded Ukraine, the global economy was suffering from the repercussion of several man-made conflicts, climate shocks, COVID-19, and rising costs—with devastating consequences for poor people in low-income and developing countries.” Speaking of the COVID-19 pandemic, the Philippines is not yet out of the woods, if not still limping out of it.

“The war in Ukraine—a major ‘breadbasket’ for the world—is deepening these challenges on an unprecedented scale. In the immediate, swift, and bold action is required by both wealthy and low-income nations to avert further humanitarian and economic catastrophe…

“The war in Ukraine has severed key supply chains and added surging costs for beleaguered companies trying to move products around the world, which are then passed on to consumers. Keeping trade open for food, fuel, and fertilizer is crucial to containing the increase in food insecurity both within Ukraine and globally.”

Filipinos are sturdy, hardy people. Okay, I will not use the eyebrow-raising word “resilient” that implies that we get by anyway, in any way. But we get it very bad when things get bad.

Read Next
Propaganda: Good or bad?
EDITORS' PICK
vivo brings to the Philippines a powerful smartphone with a slimmer body, the vivo Y02s for only PHP 6,499
46% of schools nationwide to have full face-to-face classes on Aug. 22
Apple warns of flaw that lets hackers into iPhones, Macs
What to watch out for when selecting a video surveillance solution
Heads may roll at BOC, says Palace if sugar smugglers are allowed to use recycled import permits
House energy committee chair Arroyo bats for cheap electricity
MOST READ
DepEd to give teachers P5K cash allowance within first week of classes
LOOK: Miel Pangilinan dazzles in glittery pre-debut shoot
DOJ indicts bank officer in $2.1 billion Wirecard fiasco
PH importing sugar after all: Marcos okays 150,000 MT
Don't miss out on the latest news and information.