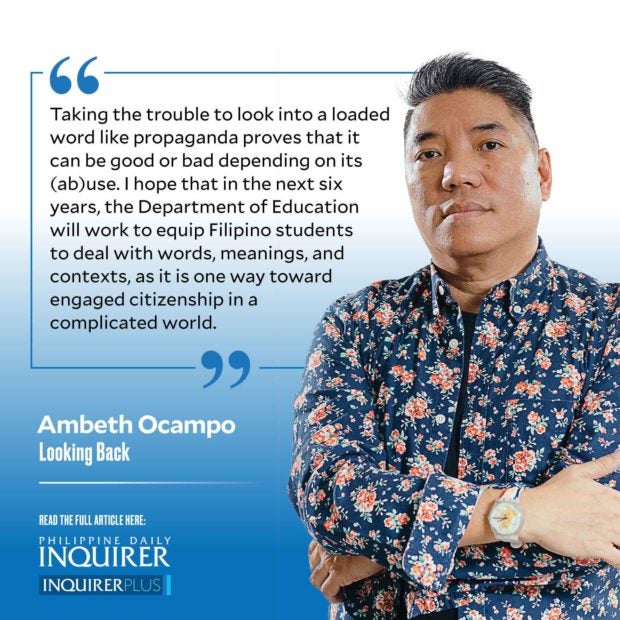 Filipinos love to play with words. We effortlessly form puns or terms with double or conflicting meanings for a laugh, often unmindful of the power of words to communicate, conceal, or confuse.

Take propaganda. Textbook history taught me that propaganda was good. Wasn’t the 19th century Propaganda Movement in Spain peopled by the likes of Jose Rizal, Graciano López Jaena, Marcelo H. del Pilar, Mariano Ponce, Antonio Luna, and other patriots who contributed to La Solidaridad? When and why did propaganda earn a bad rap, especially from our Red-tagging military? In the late 1990s, Jing Monis opened an upscale Makati salon called Propaganda, but with emphasis on the last two syllables, “ganda,” or beauty.

With everyone railing against a coming tsunami of historical distortion, I have been reflecting on the way words have changed or lost their meanings over time. Growing up during martial law, I recall dissonances between what I learned in school and what I heard and saw outside the classroom. Araling Panlipunan was not designed to teach history or critical thinking, it was designed to teach civics with an emphasis on love of country. We were not taught to contest facts but to simply memorize them without question. Facts were not to be interrogated for context and meaning. The formation of the nation was preordained, rosy, with all our heroes perfect, some even superhuman. Reading primary sources in college taught me that history and life is more complicated than textbooks made it out to be.

Words and meanings changed during martial law. School taught me that KKK was short for Kataastaasan, Kagalanggalangang Katipunan ng mga Anak ng Bayan, the revolutionary movement headed by Andres Bonifacio. In the real world, KKK meant a marketing coordination center created by Ferdinand Marcos in 1981 as the Kilusang Kabuhayan at Kaunlaran. Worse, I grew up knowing that “pag-ibig” was the Filipino word for “love,” but as an adult looking at the deductions in my payslip, I see contributions to Pag-IBIG, not love but a home development mutual fund with the contrived name: “PAGtutulungan sa kinabukasan: Ikaw, Bangko, Industriya at Gobyerno.”

Jesuit historian John Schumacher’s Ph.D. thesis “The Propaganda Movement, 1880-1895: The Creators of a Filipino Consciousness, the Makers of Revolution” did not need church review for a “nihil obstat,” certifying that it contained nothing opposed to faith and morals that led to “imprimatur,” the license to print. Instead, the manuscript went through the Armed Forces Office of Civil Relations in 1973 and was almost disapproved because the reviewer presumed from the title that the contents were subversive. An explanation in the introduction said:

“The period of the formation of a nationalist ideology is commonly known in Philippine historiography as the ‘Propaganda Movement’ and its protagonists as the ‘Propagandists.’ In spite of the somewhat unsavory connotations the term has elsewhere acquired in English, the Spanish equivalent does not have such a derogatory sense. The organization La Propaganda or the Comite de Propaganda [formed in 1880 that sent Marcelo H. del Pilar to Spain] from which the period has taken its name in English is too well consecrated by usage to be misunderstood in the Philippines.”

Well, in 1622, Pope Gregory XV created a group of cardinals to promote the faith in heathen lands that later developed into the Congregatio de Propaganda Fide, known under more nuanced translation today as the Congregation for the Evangelization of Peoples. With a 25-million euro budget, Propaganda Fide, administered by Luis Antonio Cardinal Tagle, oversees priests training for missions, support for mission churches and property, and even the vetting of episcopal nominations in mission lands. Here, propaganda is positive, from the Latin “propagare” meaning to set forward, extend, spread, or increase. Taken in an agricultural context, propagation means the cultivation of plants and animals for reproduction. Taking the trouble to look into a loaded word like propaganda proves that it can be good or bad depending on its (ab)use. I hope that in the next six years, the Department of Education will work to equip Filipino students to deal with words, meanings, and contexts, as it is one way toward engaged citizenship in a complicated world.