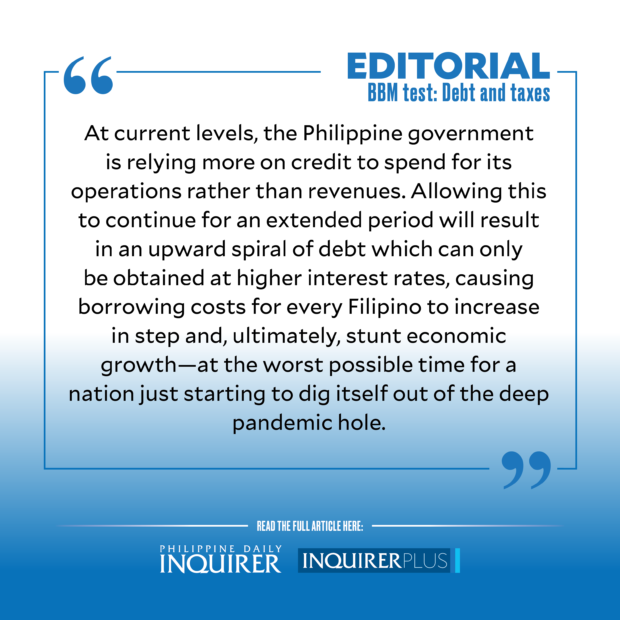 No one enjoys paying taxes.

But each administration faces its own unique set of fiscal challenges that require taxes on a variety of goods and services to be raised one way or another, and the incoming one is no different.

No different except for one thing: no thanks to the COVID-19 pandemic, the incoming presidency of Ferdinand “Bongbong” Marcos Jr. faces the toughest economic conditions, both globally and locally, since the first half of the 2000s when the country was struggling with a looming crisis brought about by ballooning expenditures and insufficient revenues.

Today, the Philippines’ total debt as a percentage to the value of economic output stands at 63 percent, which is slightly higher than the acceptable international threshold for a sustainable level of borrowings of 60 percent for similar emerging markets.

In other words, at current levels, the Philippine government is relying more on credit to spend for its operations rather than revenues. Allowing this to continue for an extended period will result in an upward spiral of debt which can only be obtained at higher interest rates, causing borrowing costs for every Filipino to increase in step and, ultimately, stunt economic growth—at the worst possible time for a nation just starting to dig itself out of the deep pandemic hole.

Headed by Finance Secretary Carlos Dominguez III, the economic team of the outgoing Duterte administration recognizes this challenge and is leaving behind a fiscal consolidation plan that entails a slew of tax hikes and spending cuts that are necessary to reduce the national debt that now stands at P12.68 trillion while simultaneously — hopefully — prodding the private sector to restore activity to a gross domestic product level that would help the country “outgrow” its debt.

Naturally, however, Finance Secretary-designate Benjamin Diokno is wary about swallowing all those bitter pills hook, line, and sinker.

No one in the incoming Marcos Jr. administration wants to start off on the wrong foot, and launching a salvo of tax increases and austerity measures in the opening months of the new presidency would surely be unpopular.

Thankfully, President-elect Marcos Jr. has the popularity to spare thanks to the biggest winning margin for a Philippine chief executive in recent times.

Thankfully, too, Mr. Marcos Jr.’s jaw-dropping popularity during the campaign period has required surprisingly few populist promises to the electorate from him (apart from the P20-per-kilo rice price, which is now being walked back as only being “aspirational”).

That, together with a solid grip on both chambers of Congress, will allow the next administration to implement what Mr. Diokno describes as the “correct” form of taxes. For now, this means a tax on digital transactions like popular video and audio streaming services, as well as the booming electronic commerce sector.

More importantly, the next head of the economic team wants the upper socioeconomic strata of society to bear this added burden while exempting the country’s poor — all digital transactions below P500 — from the new taxes.

Implementing it will be challenging, but the incoming finance chief has the requisite experience for this daunting task, having helped the country’s financial system transition to the digital world at the height of the pandemic.

This plan will require President-elect Marcos Jr. to expend some political capital. But the judicious application of political capital now, when the challenge is still manageable, will head off bigger economic (and consequently political) problems further on.

If implemented properly — and if the Philippine economy does indeed rise at a pace that will allow it to outgrow its debt — further painful tax hikes down the road may not be needed.

Indeed, no one enjoys paying taxes.

But, provided it is done correctly, the incoming administration can raise the sufficient amount of taxes from the right sectors of society to balance the government’s fiscal position and eventually restore the country’s upward economic growth trajectory.

What better legacy can the new Marcos administration leave after six years than a strong Philippine economy that uplifts the life of every Filipino? The hard work to achieve that starts now.

Economic team: So far so good