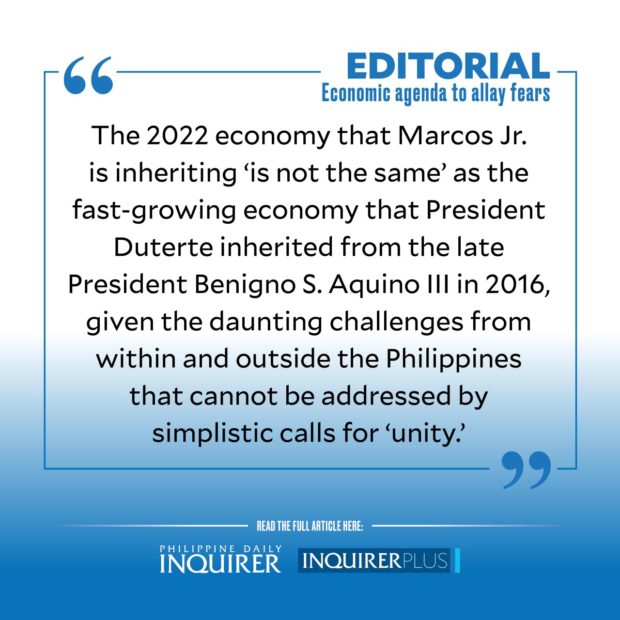 The benchmark Philippine Stock Exchange index plummeted by as much as 3.14 percent on the first trading day after the historic May 9 elections that put former senator Ferdinand “Bongbong” Marcos Jr. on the cusp of winning the presidency by a landslide, driven in part by nagging uncertainties over the presumptive incoming administration’s economic agenda.

Investors — particularly the foreign ones — reportedly rushed to unload their shares over concerns on how exactly the presumed next president of the Philippines plans to tackle the complex economic issues that need to be immediately addressed, primarily the surging prices of basic commodities, record P12.68 trillion in outstanding debt, and a weakening peso.

Marcos Jr. had already been tagged in a Bloomberg survey as “the least favored candidate” by the investor community, thus the lack of a detailed economic program has made a number of nervous investors jittery.

“The lack of clarity on Marcos Jr.’s policies is indeed a concern in the short term,” AAA Equities William Matthew Cabangon said in a Nikkei report.

As Marcos Jr. had shunned policy debates throughout the presidential campaign and disclosed “little of his vision for the country in substantive policy terms,” as the Economist Intelligence Unit (EIU) puts it, there are hardly any details to calm down jumpy investors.

However, it is widely expected that given his close political alignment with outgoing President Duterte, he will “pursue a broadly similar policy course” centering on the “three key pillars of infrastructure upgrade, tax incentives for businesses and the removal of investment barriers.”

But for the EIU, the “biggest risk to a Marcos presidency (and the country’s political stability) lies not in the policy agenda but in the competence of the incoming administration to execute it,” thus the growing pressure on the Marcos group to immediately lay out its plans, as well as name the key Cabinet members who will be burdened with the huge responsibility to carry the battered economy forward.

As ING senior Philippine economist Nicholas Antonio Mapa stressed, the 2022 economy that Marcos Jr. is inheriting “is not the same” as the fast-growing economy that Mr. Duterte inherited from the late President Benigno S. Aquino III in 2016, given the daunting challenges from within and outside the Philippines that cannot be addressed by simplistic calls for “unity.”

Investors want to know how the new administration that will take the government reins on June 30 plans to grow the economy fast enough to overtake rising debt and continue government spending to bankroll ambitious reform and infrastructure programs and help vulnerable Filipinos cope with the lingering effects of the COVID-19 pandemic, as well as the rising prices of basic commodities.

The gravity of these myriad economic challenges, indeed, cannot be underestimated and has already prompted American financial services giant J.P. Morgan last Tuesday to downgrade the Philippines to “underweight,” which means that it has advised its clients to lighten up or reduce their exposure to Philippine stocks due to the more risky investment environment.

Rising risks have also caused interest rates on the benchmark 91-day treasury bill to jump to 1.531 percent the day after the elections from 1.272 percent last week. The private sector has likewise reverted to a wait-and-see attitude “as a matter of prudence,” holding back on any major investment decisions until Marcos Jr. shares his detailed plans and policies over the next 100 days and names his economic team.

Providing some relief to jumpy investors, however, is the disclosure by Finance Secretary Carlos Dominguez III that transition talks with the incoming administration has begun and is proceeding smoothly, although he declined to identify the members of the new economic team.

Michael Ricafort, chief economist at Rizal Commercial Banking Corp., underscored the need for a credible and competent economic team as it will be the key to the success of a new president, especially one who will have to hit the ground running at full speed to overtake mounting challenges and fulfill his campaign promise of a better life for Filipinos.

If his apparent insurmountable lead is confirmed, Marcos Jr. must do himself—and the country—a favor by immediately presenting his economic team and strategy, and begin to assure Filipinos sharply divided by the bruising election campaign that the seemingly overwhelming mandate for his presidency will not be for naught.