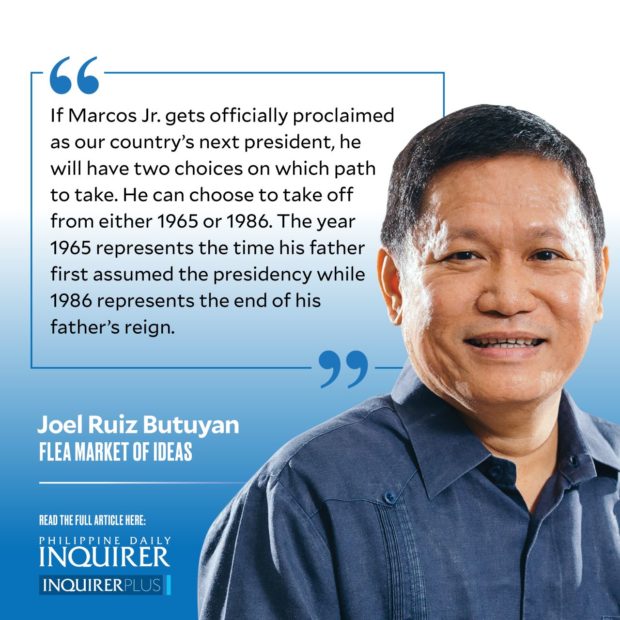 Depending on which side of the political divide we belong to, we’re all either wearing a huge smile or sporting a big scowl after Monday’s elections. Those smiling expect our country’s transformation into heavenly paradise, while those scowling dread our nation’s descent into hell, in the next six years.

So many unprecedented events arose from this presidential election. First, it’s unprecedented in our history that our people are so divided under two extremely opposite views of our country’s future under a new president. Second, the lightning speed by which we learned of the election results is unmatched even by United States standards. Third, the massive people’s campaign that sprang in support of Vice President Leni Robredo is unparalleled in our past elections. Historians and other analysts can write book volumes explaining these extraordinary events.

There are issues being raised, questioning the reported win of Ferdinand Marcos Jr., ranging from the failure of many vote-counting machines, inability of citizens to vote, alleged tinkered source codes, to massive vote-buying.

If Marcos Jr. gets officially proclaimed as our country’s next president, he will have two choices on which path to take. He can choose to take off from either 1965 or 1986. The year 1965 represents the time his father first assumed the presidency while 1986 represents the end of his father’s reign.

If Marcos Jr. decides to take off from 1965, he will have to start afresh by cleaning his plate of the stain and dirt that his father accumulated in his 20-year rule. This means withdrawing his family’s opposition to the government’s claims on ill-gotten wealth that are still pending in court, paying estate taxes, and apologizing for the human rights abuses. Of course, this is wishful thinking to many people, but if Marcos Jr. wants to carve out his own name, and not go down in history as a mere caricature of his father, this is his historic chance to do so.

If Marcos Jr. charts his presidency by taking off from 1986, he will seek refuge under the shadow of his father and premise his actions from where his father left off. Marcos Jr. will be loaded with all the heavy baggage of his patriarch’s misrule. He may move to erase everything that was done after 1986—curtail freedom of expression, create his own cronies, persecute activists, and trash human rights. He may initiate a revision of the 1987 Constitution, which repudiated everything that his father stood for.

Apart from the lure of carving out his own niche in history and a chance to cleanse the Marcos name of stain and stench, what can impel Marcos Jr. to take off from 1965 will be the constant push of newly revived anti-Marcos forces. This group is sporting for a protracted fight. The youth, in particular, have found a big cause for activism in their generation.

What may drive Marcos Jr. to choose 1986 as the starting point of his presidency will be vengeance. One can imagine the strong disposition for revenge because of the hurt that must have been bottled up for 36 years since the Marcoses were ousted from power. Marcos Jr. may also take the posture that he has been given blanket authority to do whatever he wants because of the huge votes he garnered. He may entertain thoughts that all his family’s sins were erased by the massive mandate he received.

Supporters of Marcos Jr. are far bigger compared to the number of his detractors, based on the results of the election. However, Marcos supporters are not the kind who will go out of their way to rally behind him. They will sit back and expect Marcos Jr. to rely on police and military forces.

In contrast, anti-Marcos groups are the kind who will spend their own funds and devote considerable time to sustain massive rallies, based on their show of force during the campaign period. This group can carry on with civil disobedience, business boycotts, and regular student demonstrations. While this group may be smaller compared to pro-Marcos supporters, they have a far bigger capacity to throw a monkey wrench on the economy.