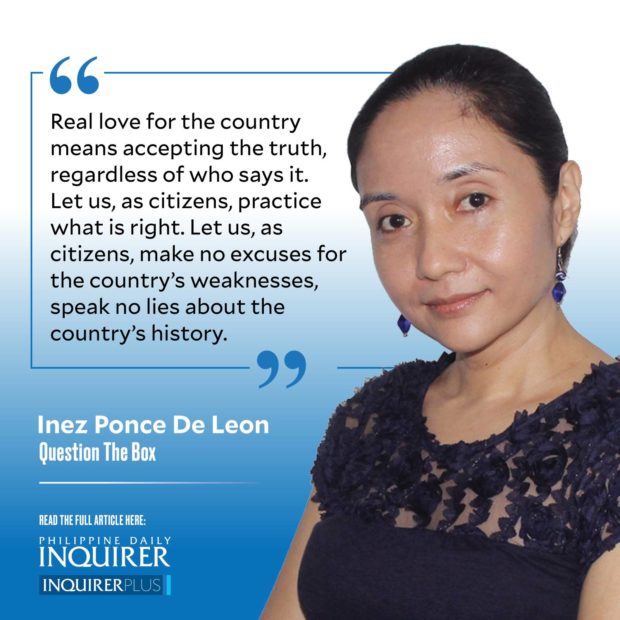 We kept on hearing it from opposing sides last campaign season: if you truly love your country, then you will vote for…

The nature of this love, however, must be discussed and debated, rather than plastered on as a label and sold as “Pinoy Pride.” No such discussion can be complete without first differentiating nationalism from patriotism. Those words are often used interchangeably, but they have distinct meanings in scholarly literature.

Nationalism is an extreme love based on the perception that one’s country is superior to any other. Nationalism is ideological: it operates on the idea that loyalty to a country should supersede citizens’ opinions, interests, and principles. To be nationalistic is to be intolerant of criticism, to always justify past mistakes, and to make excuses for current ones.

Patriotism, on the other hand, is a love for one’s country based on shared values and beliefs. Patriotism is constructive: it operates on the idea that love is not about enabling, but improving. To be patriotic is to acknowledge a country’s problems and seek to solve them.

While nationalism looks outward for validation (“At least we’re not as bad as…”), patriotism gazes inward (“We have to keep doing better”). While nationalism hyper-focuses on all that is good and is blind to deficiencies, patriotism sees goodness as any country’s default. Patriotism identifies problems in order to propose solutions.

So, which one are we?

A quick look at the online arena shows a brand of toxic nationalism infesting comments sections. People who speak about administration misdeeds are accused of being disloyal to the country, of plotting to overthrow the government. There is a general unwillingness to question authority, an inability to think critically, and frightening blindness to wrongdoing, even when the sins are so blatant.

“My country, right or wrong,” the attackers seem to chorus.

The phrase, though popular, is a fatal shortcut to the original words of Carl Schurz, an 1800s US senator. The original version is actually an invitation to patriotism: My country, right or wrong; if right, to be kept right; and if wrong, to be set right.

As citizens, we, therefore, need to discern: who exactly is destroying our country?

Is it the schools that teach critical thinking, the students who call attention to injustice? Maybe the true destroyers are the schools that churn out students who can barely read, let alone think; or the parents who demand that children be docile all their lives even if those same children will be both emotionally and intellectually stunted; or the school systems that allow teachers to be underpaid, be overworked, or—a whole other category of evil—spread falsehoods to their students.

Is it the health workers who leave the country? Perhaps, the true destroyer is the system that does not value their services, or the government institutions that still cannot trace or redeem the billions of pesos lost in government insurance funding.

Is it the writers, columnists, and scholars pointing out shortcomings in society? Maybe, the true destroyers are the troll armies that spread twisted history to wreck reputations and deceive people, or the paid keyboard warriors who harass the people trying to change the country for the better.

Is it the farmers who ask for better lives? Perhaps, the true destroyer is any agency that sees them as mere producers of crops that should be cheaper, regardless of the sweat and tears that went into the harvest.

Is it the priests who preach virtues, who remind us of the difference between right and wrong? Maybe, the true destroyers are those who go to church for an hour on Sunday, and then spend the rest of the week spreading lies and making excuses for sins so obviously committed.

Real love for the country means accepting the truth, regardless of who says it.

That is the real “Pinoy Pride.”

Uncovering the pink in all of us