Uncovering the pink in all of us 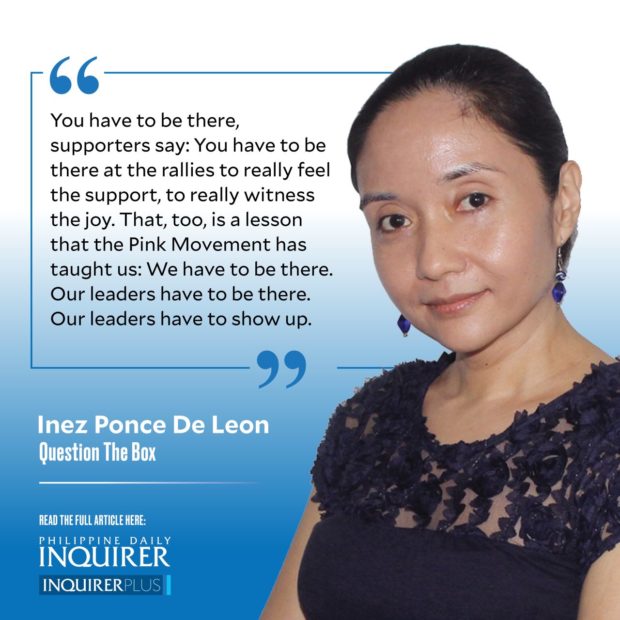 The Pink Movement is painted lovingly, online, in snapshots of colors and sound.

There are the thousands of supporters appearing in waves of all shades of rose, like a rolling sunrise across roads and fields. There are raised fists, cheers that bring goosebumps even from afar, photos of people sharing everything from pink donuts to pink drinks.

There, too, are the house-to-house campaigners, who brave the catcalling, hissing, and trolling, who hang up tarpaulins or hand out fliers, who sit down and listen to voters whose voices are in danger of going unheard.

So much is posted online, but there is energy that can be felt only at the rallies, as people smile at each other and sense a common understanding built on the same hopes and dreams; or only on house visits, as campaigners see the light in people’s faces as they recognize the power of citizens working together under a transparent government built on accountability. So much is told, but more is felt only on the day itself, in the moment, feet on the ground, prayers to the sky.

I can provide only an approximation, based on how people have described their experiences.

Whether at a rally or on a house-to-house campaign, there is a feeling of solidarity, rather than unity: It is a togetherness in which all who attend are recognized for what unique gifts they bring to the table. This is not the kind of unity that destroys individual selves, that tells people to simply obey a government that will give them everything. It is a grown-up kind of harmony: People bring whatever they can, and are appreciated for what they have, whether their strength is in creating witty posters or making empanadas, whether they have the physical stamina to climb walls to hang posters or the mental stamina to explain abstract ideas to those who need to understand the nature of good governance.

There is the feeling that people are not defending a person, or even a family; they are defending morals and standards that should neither be lowered nor conceded. It is this depth of feeling that makes people stand for hours at a jam-packed rally, or talk for hours to individual citizens. People feel that they are working within a system that is greater than the sum of its individual parts, where principles are embodied by a presidential candidate who shows up to debates and helps people, and a vice presidential candidate who has long served and speaks for the marginalized.

There, too, is the feeling that any person’s weakness can be supplemented by the strengths that others bring. We are not a country, therefore, in which individuals are melted into a common whole. We are a community of puzzle pieces that fit neatly together.

People often say that the Pink Movement has brought out the best in us, that this is the kind of country that we want. But if we look deeper, perhaps we, too, can say that the movement has made us children again.

As children, we were taught to look up to those who did good deeds, who were forthright and principled, who made us want to be good people. We would be embarrassed to be caught in a lie. We would be ashamed to be called “stupid” or “thieves.”

As children, we would have been curious. We would have asked questions, checked if an answer was truly right, cross-checked by asking more people because we were unsatisfied with vague responses and motherhood statements.

Life, we knew then, was not simple; but we could see the simple truths behind deceptions dressed in disguises that could be ripped apart only by a child pointing at a naked emperor.

The rallies revealed a side of ourselves that we have long put to sleep: of storytelling, of helping each other, of bringing happiness and wisdom to all, of being present.

Maybe this is not really new.

Maybe this Pink Movement is who we really are.