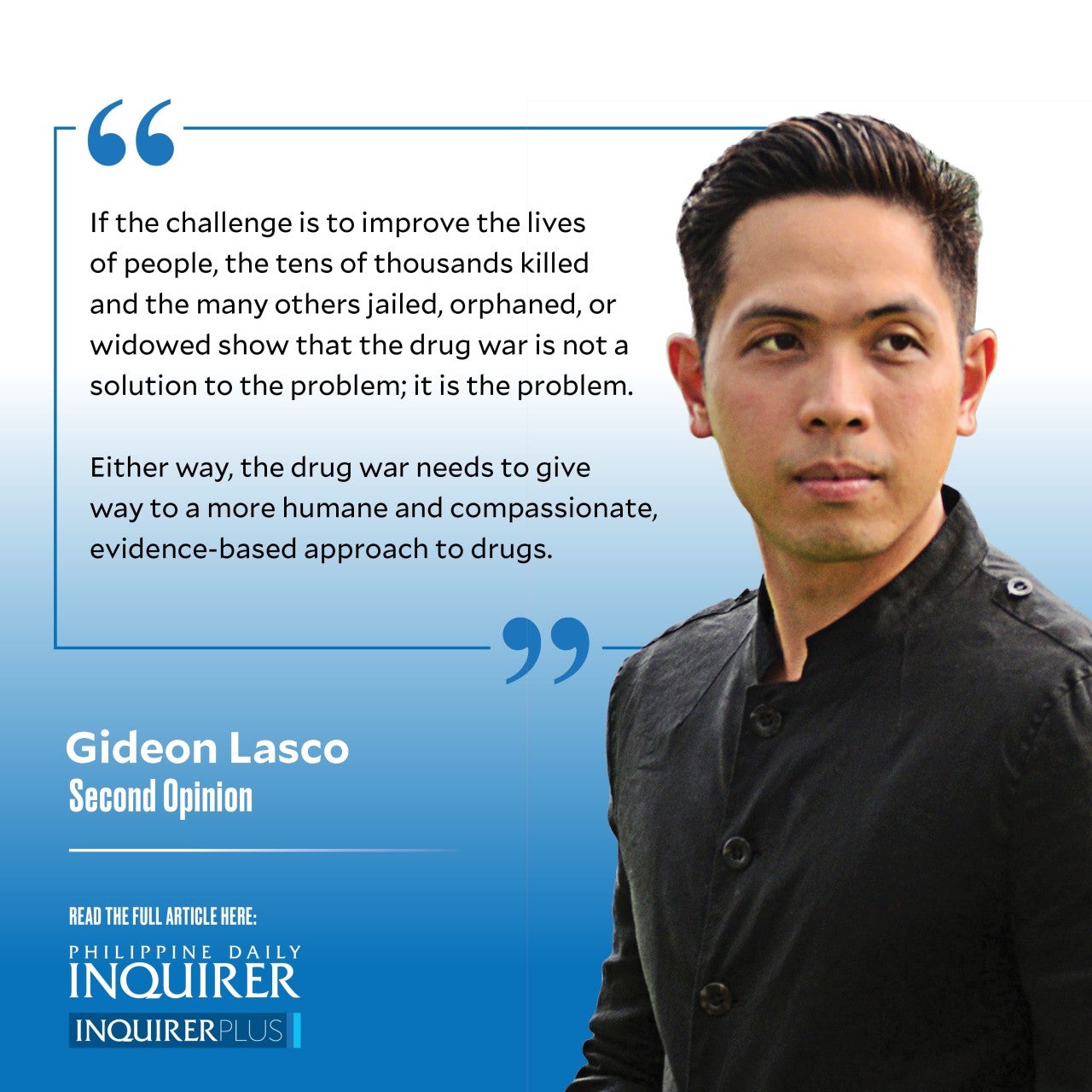 As the Duterte administration comes to an end, the change of leadership presents a new opportunity to finally, if belatedly, end the drug war which, by the President’s own admission, has been a failure.

Of course, by “failure,” he likely means the inability to “eliminate” (read: kill or jail) all the people he perceives to be “subhumans” and “zombies,” alongside the inability to stop people from using drugs altogether. Indeed, to the very end, he has insisted on his narrative that drugs are destroying the country and that he took the correct approach—only that the problem was too big. “Now that I won’t be president anymore, nobody can dictate what I do,” he said in Davao days before the election, adding: “I’ll search for drug peddlers, shoot them, and kill them.”

I would define failure differently: the inability to prevent harm to individuals (whether from drugs or from drug war-related violence), and to bring peace, security, and economic development to communities—on top of the inability to suppress the drug trade and the criminal syndicates associated with it. I would add that, for all the good intentions of some of our government officials and law enforcers, the fundamental flaw of the so-called drug war is that it was never meant to help people; it had other goals: to use drugs as a populist trope, to go after political enemies by using drugs as accusation, and to instill fear among communities.

In other words, if the challenge is to improve the lives of people, the tens of thousands killed and the many others jailed, orphaned, or widowed show that the drug war is not a solution to the problem; it is the problem.

Either way, the drug war needs to give way to a more humane and compassionate, evidence-based approach to drugs.

First and foremost, it must involve unequivocally renouncing extrajudicial killings, and making it clear that any human rights abuses will not be tolerated in connection to antidrug campaigns. Under the Duterte administration, officials have paid lip service to human rights, but President Duterte himself has vowed to protect police officers and mocked the very idea of human rights. Meanwhile, the presumptive president, Ferdinand Marcos Jr., has vowed to shield Mr. Duterte from the International Criminal Court. If we are to truly have what his campaign calls a “different” approach to drugs, there must be accountability and justice.

Second, it must likewise involve abandoning the use of drug accusations as an instrument for political gain, harassment, and vindictiveness. If Marcos Jr. is serious about his calls for unity, he will take the lead in calling for the dropping of the charges against Sen. Leila de Lima and her immediate release.

Third, it must move away from the (over)criminalization of drugs that has led to disproportionate penalties, the overcrowding of our jails and prisons, and unnecessary measures like drug testing in schools. Marcos Jr. himself has hinted at recognizing this; in one of few occasions that he allowed himself to be interviewed, he said: “Enforcement, we have seen, can only take you so far… Treat drug addicts as patients, in need of a cure. It becomes a crime when they’re involved in distribution or sale of illegal drugs.” Although such a statement wrongly assumes that all drug use is problematic and all kinds of distribution and sale are the same, I hope that this kind of position would open up objective and urgent discussions toward decriminalizing marijuana and other drugs.

Finally—and this is where the alternative to the drug war lies—it must support interventions that not only addresses individuals’ needs (whether clinical help, community-based programs, socioeconomic support, legal assistance, etc.) but also address the structural contexts of drug use (lack of access to health and social services, stigma and discrimination, poverty and inequity). Crucially, there must be an effort to listen to people who use drugs, the communities they inhabit, and the experts—from psychologists and clinicians to anthropologists and sociologists—who have devoted their careers to understanding drug use.

In the words of Inez Feria of NoBox, a nonprofit that focuses on drug policy reform: “We need a compassionate and evidence-based approach that reflects people’s lived realities. And we need to create an enabling environment that supports individuals and communities instead of punishing them.”