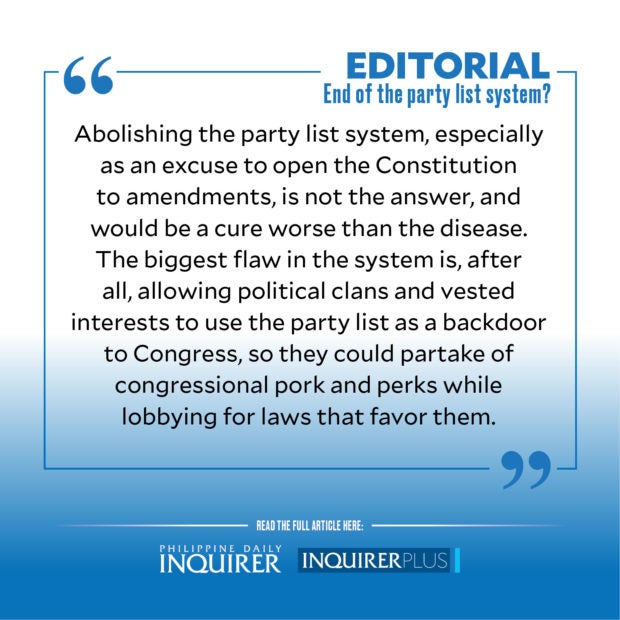 As of last week’s official canvass by the Commission on Elections (Comelec), only six of 177 party list groups contending for 63 party list slots in Congress have obtained the required number of votes needed to secure at least one seat in the House of Representatives.

With the low number of party list groups making it to the two-percent club, the Comelec is resorting to the complicated three-stage formula laid down by the Supreme Court in 2009 to determine which party list would get how many seats based on the proportion of votes they have received. Those who did not get the minimum two percent would still be able to win a seat.

Is the disappointing number of party list votes an indication of disenchantment with this well-intentioned Charter provision meant to provide a voice in Congress for marginalized sectors?

With patronage politics enabling dynasties and political elites to dominate Congress, the framers of the 1987 Constitution wanted to provide a seat at the table for representatives of labor, the peasantry, urban poor, indigenous cultural communities, women, youth “and such other sectors as may be provided by law, except the religious sector.” The intention was put into law by Republic Act No. 7941 or the Party List System Act enacted in 1995.

Somewhere along the way, the “marginalized” and “underrepresented” were slowly edged out by traditional politicians and powerful business interests that fielded their relatives or proxies, as seen in the case of a President’s son representing security guards. A 2013 Supreme Court ruling that allowed political parties and groups to represent the marginalized even if they do not belong to that sector, opened the system to further abuse.

And so did the Comelec’s lax record in scrutinizing party list groups. While the poll body disapproved the party list application of health care workers, it accredited controversial ex-Communications secretary Mocha Uson’s “Mothers for Change” party, when neither she nor the other nominees are mothers at all, or the Duterte Youth Party with its contentious history and overaged nominee.

A study by election watchdog Kontra Daya found that about 70 percent (or 120 of the 177) of the party list groups accredited to run in the May 9 elections have been “hijacked” by political clans, big business, and other parties connected to government or military interests.

Ironically, President Duterte, in one of his last public addresses as chief executive, called on his successor to abolish the party list system by amending the charter. “Ginagamit eh. Although they are very few, still they participate in the government that they wish to destroy,’’ he said last week. “It would be as good as any other time to initiate whether to convert Congress into a constituent body or call for a constitutional convention, but which is very expensive to do,” he added.

But the outgoing President’s rage, belated at that, was directed not at the politicians who have hijacked the party list system, but at militant party list groups like Bayan Muna, that he and other officials have, without evidence, described as communist fronts.

Through its incessant Red-tagging of government critics, opposition figures and militant groups, the National Task Force to End Local Communist Armed Conflict (NTF-Elcac) has apparently succeeded in shutting out the Makabayan bloc of party list groups, which appear headed for a loss in last week’s elections. Bayan Muna Rep. Carlos Zarate has blamed the NTF-Elcac for the fake Comelec resolution circulated on social media on the eve of the polls, which said that Alliance of Concerned Teachers, Anakpawis, Bayan Muna, Gabriela, and Kabataan have been disqualified.

But abolishing the party list system, especially as an excuse to open the Constitution to amendments, is not the answer, and would be a cure worse than the disease. The biggest flaw in the system is, after all, allowing political clans and vested interests to use the party list as a backdoor to Congress, so they could partake of congressional pork and perks while lobbying for laws that favor them.

Why not amend the party list law instead, and institute strict accreditation rules including a more diligent scrutiny by the Comelec to sift out party list groups and nominees that do not live up to the constitutional mandate?

Unfortunately, party list representatives who have gamed the system can hardly be expected to initiate any change in the law that allowed them a seat in Congress, the same reason why the anti-dynasty law has never been passed. But would it be too much to hope that there would be enough voices and political will in the new Congress to seize the moment and do the right thing?