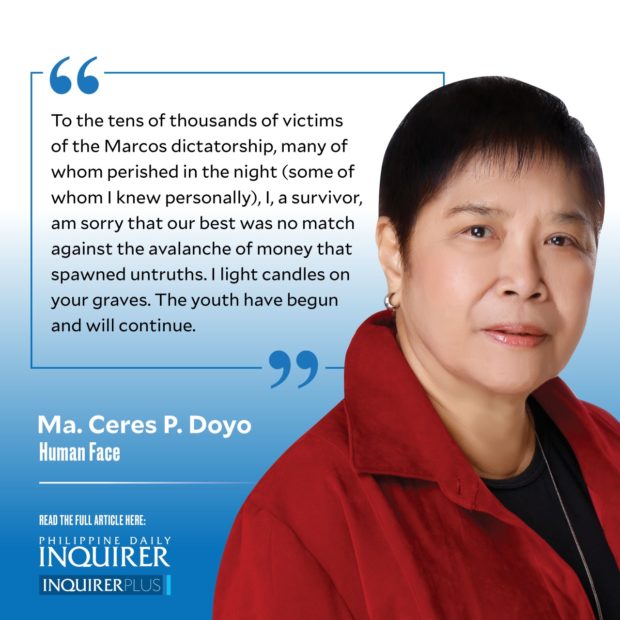 First, let me share something painful from a religious sister who has served for years in the second biggest slum area in Manila, living in a tiny room far removed from convent comforts. She has embraced poor, distraught families bereaved by tokhang and extrajudicial killings in the Duterte drug war, has given solace and safety not only through words but through legal and other means.

During the two years of the COVID-19 pandemic and long lockdowns, Sister Marie, a true-brown Filipino, stayed on. I had been in the area where she works without letup, and I could only marvel at her zeal that makes me zoom back to my own dashed aspirations. Sister Marie is sturdy like an ox, but sometimes the yoke and the heavy burden have to be laid down. Was it worth it?

Do not judge, oh ye bashers, smashers, and hush-ers. Istap! the sanctimonious pontifications. Allow her to scan the ruins, to feel her heart racing wildly, and with tears in her eyes and grief in her heart, to strike back. Her Facebook post:

“Sana hindi ka lalapit muli upang humingi ng ayuda dahil iminulat ka namin upang bumoto ng tama pero ibinenta mo pa rin and boto mo kapalit ng 6 na taong paghihikahos. Good luck. Out na rin po ako sa (area na ito).” (I hope you do not come again to ask for material aid because after we had made you aware on how to vote right, you still sold your vote in exchange for six years of suffering. Good luck. Am out of here.)

“Ibinenta mo pa rin ang boto mo” are the key words. Nothing about the chosen and unchosen candidates. Why? is the cry. My painful answer: Soeur Marie du Bon Pasteur, all that hard work and compassion you had poured out for years were no match against the lure of dirty money.

Sister Marie will soon head for an even more challenging post in a foreign country. She has the right to vent her feelings on how the national elections turned out. The Marcos family that pillaged this country is, after 36 years, back in the pinnacle of power. Or am I speaking too soon?

My own take: Remember being thrown into the darkness and dealt a near-fatal blow that left you gutted, crushed, and shattered in a thousand pieces? Recall the rejection, abandonment, and loss, the pain that has no name. This, this is déjà vu, except that you are not alone, you are in the company of kindred spirits who, too, are hurting.

To the tens of thousands of victims of the Marcos dictatorship, many of whom perished in the night (some of whom I knew personally), I, a survivor, am sorry that our best was no match against the avalanche of money that spawned untruths. I light candles on your graves. The youth have begun and will continue.

Even as we speak, the youth that awakened to their own force during the campaign to elect Vice President Leni Robredo for president and Sen. Kiko Pangilinan for vice president continue to push back evil forces of disinformation, deceit, and lies that have taken over the Philippine landscape. Gifts of their time, talent, and treasure are not for naught. We only had a glimpse of them, and there would be more.

Breast beating, blame throwing and I-told-you-so-ing are the knee-jerk reactions of many, not a few biting into the narrative that the “pink movement” that arose from the Robredo candidacy and showed its mammoth force in numbers was too distant from the masses, holier-than-thou, hypocritical, blah, blah, blah. Come on, these traits run across political divides and not the monopoly of one side. I say: When abused, do not offer the other cheek for more abuse. Don’t be “tweetums.” Play Chopin’s “Revolutionary Etude” in the ruins, or better still, “Ang masa, o ang masa” while the victors jostle for the caviar.

It cannot be disputed that the Leni-Kiko campaign ran on the steam of volunteerism that their opponents couldn’t match. NOT MONEY that the Marcos camp was awash in. How? Why? From where? These are not rhetorical questions that beg for rhetorical answers. They had already been answered with legal proofs and documentations.

IT. IS. ALIVE. It is young. Mind-boggling is the force (I’d rather not call it a movement). It bears watching. It throbs, it is raring, raging. Truth is its best weapon. (More another time.)