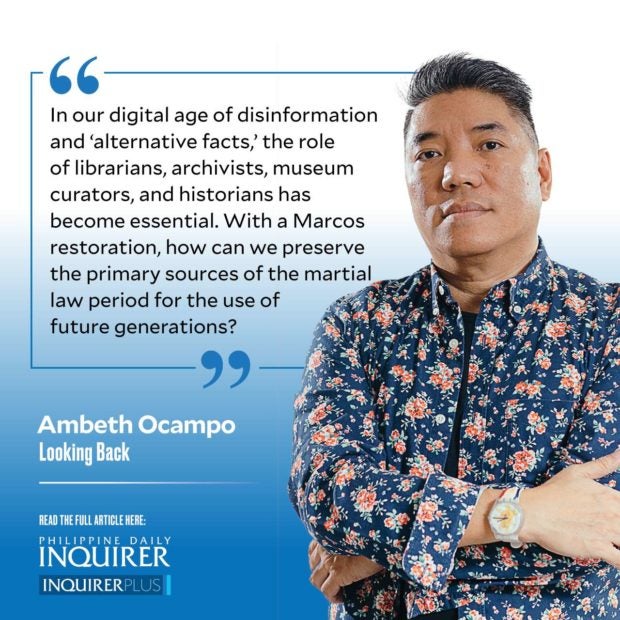 E Arsenio Manuel (1909-2003), prolific UP academic and eminent anthropologist, was a closet historian. Sitting in his graduate class on Philippine prehistory changed my life and the way I looked at the past. On the first day, the only time he used the blackboard, he wrote: “Where history ends, anthropology begins.” He explained that history is based on written records, while prehistory or the “prehistoric” referred to the period before written records. A pity that Manuel’s succeeding lectures were lost on his registered students, some took siesta or merienda during class since the professor, then in his 80s, was hard of sight and hearing.

I visited Manuel in his book-filled Teachers Village home to buy copies of his “Dictionary of Philippine Biography”: Volume 1 (1955), Volume 2 (1970), Volume 3 (1986), and Volume 4 (1995). Volumes 5 and 6 remained in typescript at the time of his death because he had no funds to print them. While researching in the prewar UP Library on Padre Faura, he decided to major in anthropology and leave history to his contemporary Teodoro A. Agoncillo (1912-1985). Yet he remained, as can be seen in his “Dictionary of Philippine Biography,” a closet historian.

Manuel related how he risked his life gathering primary source material, actually ephemera, by taking down propaganda posters at night during the Japanese Occupation. He was a pack rat who compiled “subversive” printed materials in the late ’60s and during martial law. Alas, Manuel’s library was pilfered in his old age and dispersed on his death. Following the example of his teacher, the pioneering anthropologist H. Otley Beyer, he assigned and compiled student research papers, binding them into volumes he called the “Pasig Papers.” Unlike Manuel, Beyer bound the ethnographies by his students by province or by topic, making it easier for researchers. As undergrad term papers, these are of uneven quality, but many of the things noted down in the past century are now historical material. In our digital age of disinformation and “alternative facts,” the role of librarians, archivists, museum curators, and historians has become essential. With a Marcos restoration, how can we preserve the primary sources of the martial law period for the use of future generations? The online Official Gazette was a treasure trove of information, especially “The President’s Day” 1944-2016. It has not been updated in years.

If print newspapers become extinct like dinosaurs, how will people compile “clippings”? Agoncillo, Manuel, Otley Beyer had well-organized clippings in their library. The same with the late Dean Armando J. Malay, whose library was a research playground for me. Pandemic restrictions suspended my use of the scrapbooks of the late Purita Kalaw Ledesma who documented the development of postwar Philippine art. In the library of the Agustinos Filipinos in Valladolid, Spain, are scrapbooks of “recortes” or daily clippings from the newspapers Heraldo de Madrid and Diario de Manila from 1896-1898 that document the Philippine Revolution from the eyes of the enemy. If history is based on written records, what primary sources of our times will be available for the historians of the future? Is anyone downloading and sorting out the millions of Twitter, Facebook, Instagram, and TikTok posts that fly by us daily?

I bought a scrapbook of obituary clippings from 1935-1963 from a garage sale and can’t imagine who compiled this morbid collection and arranged the clippings alphabetically. Most are notices of deaths, funerals, anniversaries, and cards of thanks. This scrapbook reminded me of E. Arsenio Manuel’s advice that historians should make it a point to make the rounds of cemeteries and take down dates of birth and death off tombstones for future reference. Newspaper obituaries are physically easier to access than tombstones and provide more information: places of birth and death, cause of death, names of family members, etc. Prominent personalities get written about and the most interesting clippings are on the death of Florencio Natividad, the self-proclaimed “Emperor Flor Intrincherado” who was declared insane and spared a sentence for sedition in 1927. He died of septicemia in the Philippine General Hospital in October 1935. One can begin a first draft of history from obituaries, but the challenge, as Agoncillo always reminded his students, is: “No document, no history!”