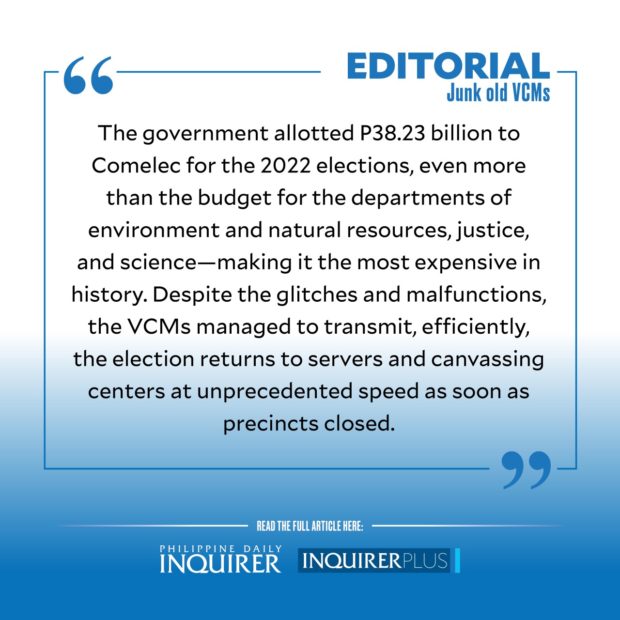 Voters will remember Monday’s elections for the fast unofficial electronic transmission of votes where two scions of political dynasties consistently maintained commanding leads over their rivals in the presidential and vice presidential races. But they will also remember the malfunctioning vote-counting machines (VCMs) that delayed the voting process in various precincts causing confusion and long queues of voters, in the middle of a pandemic at that, with many of them still waiting to cast their votes as late as five o’clock the following morning — or almost 24 hours since precincts opened.

As early as late Monday night, the whole country already knows who their next president and vice president would be. Ironically, there were voters in Metro Manila who have not even voted until Tuesday.

In Lagro Elementary School, Quezon City, 33 voters, including senior citizens, waited until five o’clock in the morning of Tuesday to cast their votes — even as precincts in most parts of the country have already closed hours ago and electronic transmission to the Commission on Elections (Comelec) transparency media server was almost at 90 percent. These voters have been without sleep and food, but they opted to wait anyway for the Comelec to deliver the replacement of a faulty SD card, so they could feed their ballots to the VCM themselves.

Voters like the Lagro 33, “[manifested] people’s willingness to vote which must be recognized and satisfied as provided in the Omnibus Election Code (OEC),” said Lente, or the Legal Network for Truthful Elections composed of lawyers and paralegals. Lente earlier called on the Comelec to extend voting hours, citing the OEC which assures voters within 30 meters in front of the polling place that they could still cast their votes even past the voting period or until 7 p.m.

Watchdog group Kontra Daya said that almost 2,000 VCMs malfunctioned in the first six hours of voting and affected an estimated 1.1 million voters. The Comelec has gone as far as to acknowledge that 1,867 VCMs, or 1.7 percent of the 107,345 machines used in Monday’s elections, were problematic and plans to retire them after this. “I think this is the last dance for our VCMs. We will not use them anymore in the 2025 midterm elections,” said Comelec Commissioner Marlon Casquejo, chair of the election steering committee. These VCMs, which were acquired from automated elections supplier Smartmatic Corp., have been in use since the 2016 elections and have already exceeded the expected five-year life span of technical machines.

Why then did the Comelec insist on using the aging VCMs for crucial national elections knowing that they were prone to malfunctions? Last year, the Comelec refurbished over 97,000 VCMs for use in Monday’s elections and conducted tests on them. But the Alliance of Concerned Teachers (ACT) said the Comelec and its partner F2 Logistics should still be held accountable for these machine failures. “How can these machines pass the final testing and sealing but bog down in the first hours of voting?” asked Raymond Basilio of ACT.

Voters whose precincts faced these problems were advised to either wait until the machines were fixed, return later, or sign a waiver entrusting their filled-out ballots to the Board of Election Inspectors who would then “batch feed” these once the technical issues have been resolved. Many voters opted to wait.

Part of ensuring the sanctity of the ballot is for the voters themselves to fill it out in secret (thus the secrecy folders), feed it to the VCM, and check the receipt to make sure that their vote is faithfully counted and recorded. This is the right that many voters were forced to leave to chance because of the malfunctioning VCMs.

Despite these glitches and malfunctions, the VCMs managed to transmit, efficiently, the election returns to servers and canvassing centers at unprecedented speed as soon as precincts closed. The Comelec credited this fast transmission of results, the fastest since 2010, to “upgraded equipment.” “It’s because of the improved and upgraded equipment and systems so as to prevent the 2019 scenario,” Comelec Commissioner George Garcia said, referring to the infamous seven-hour glitch that marred the midterm elections three years ago.

Still, it is incumbent upon the Comelec to address irregularities and suspicions over the very fast transmission of results and faulty machines to ensure that the results of this highly contentious election will truly be reflective of the will of the people.