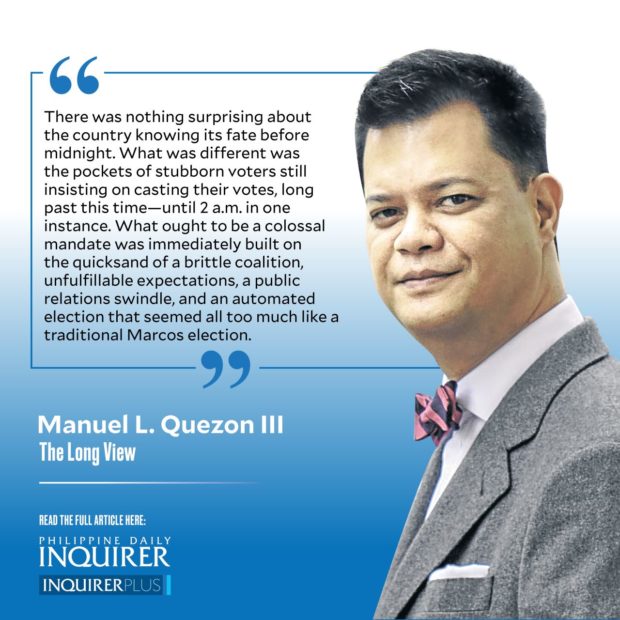 Back in 1940, Jose Yulo said six years is too short for a good president and too long for a bad one. In a sense, this basic realization was one reason that, for a generation now, administrations have all flirted with, but failed at: trying to change the terms of presidents and other elected officials. The public and key institutions, from the Church to the courts, vetoed these proposals. This was a kind of consensus—to do nothing. From 1992 to 2022, in a country of very little consensus, two more points of common agreement emerged. The first was that the appetite for experimental regime change outside of fixed terms vanished; the second was a kind of corollary to the public and institutional refusal to let presidents change the rules of the game: the country, instead, preferred to alternate between populism and reform, with neither side having enough time to achieve permanent dominance.

Then, between 2010 and 2016 two things emerged. First, the price of modernity — the inconvenience of modernizing systems — ironically alienated the New Middle Class a reform government helped expand, if not create, even as the Old Middle Class with its grounding in civic participation, had left the scene through emigration. Second, the great national trauma of Mamasapano led to a great divorce between the Filipino people and the Aquinos, leaving the late president unable to keep the reform constituency together when it split over the Roxas-Poe candidacies at the precise moment a new coalition, motivated by the liberties of its principals literally being in mortal peril, formed: the Arroyos, Estradas, Enriles, Revillas, even Marcoses, were willing to try anything. Something had to give.

What had to give were the institutions that had emerged in 1987 with the establishment of our Fifth Republic. The unique, nine-year Arroyo term, the second-longest in our history, by force of circumstances developed a kind of mission creep to slowly eliminate the institutions that had kept the political pendulum swinging. It came to power by harnessing people power, then neutering it by channeling it into a constitutional papering-over of Edsa Dos; it was blessed by the Church hierarchy and then neutralized them by means of official charity; it responded to the looming reformism of Arroyo’s successor by a comprehensive tactic of packing the bureaucracy with allies, and then she identified the right combination of reckless posturing, enthusiastic killing, and inept governance, so that Rodrigo Duterte changed the terms of engagement of the 2016 election and, then, turned the political world on its head, providing her the means to take down the last institution standing, big business and the media.

When all is said and done, Leni Robredo, elected to the vice presidency in the last gasp of the 1986 Coalition, brought together a new one that clawed its way, painfully, but necessarily, precisely because it is new and comprised of the unaccustomed, to rebuilding the constituency she once had in 2016 but had lost in the intervening years. We forget that her current 14.6 million votes, though a smaller percentage than hers in 2016, is still larger than the 14.4 million she obtained six years ago. Yet, when she declared her candidacy for the presidency and through much of the campaign, she hadn’t even matched the percentage she’d had back then. What this tells us is in the closing days of this campaign, the undecided went for her; just as, in the campaign itself, she’d inspired, and presided, over a new coalition that incorporates the remnants of the 1983-1986 but much that is new, and even unaccustomed, to cohabiting with the Center.

In contrast, the Marcos Restoration, aside from having muscled its way through by a bodyguard of lies, waged an intensely conservative campaign because of the unique weaknesses of its principal (too touchy to risk revealing his petulance, or his incoherence, or his lack of substance, by subjecting himself to public scrutiny too often). Its victory — historic, not least because it is claiming a majority victory last seen in our pre-martial law elections — has been marred by three things, two of them dating back to before Election Day (the Marcoses couldn’t break through a kind of electoral glass ceiling of 30-odd percent until Arroyo brokered a coalition with Duterte is one; the other is that this brokering means the Marcoses must remain vigilant about both Arroyo and the vice president, who is more her protégé than his real partner), and the third, because of the elections — the spectacular incompetence of the current Commission on Elections.

There was nothing surprising about the country knowing its fate before midnight. What was different was the pockets of stubborn voters still insisting on casting their votes, long past this time — until 2 a.m. in one instance. What ought to be a colossal mandate was immediately built on the quicksand of a brittle coalition, unfulfillable expectations, a public relations swindle, and an automated election that seemed all too much like a traditional Marcos election.