A vote for a gender-equal and inclusive future 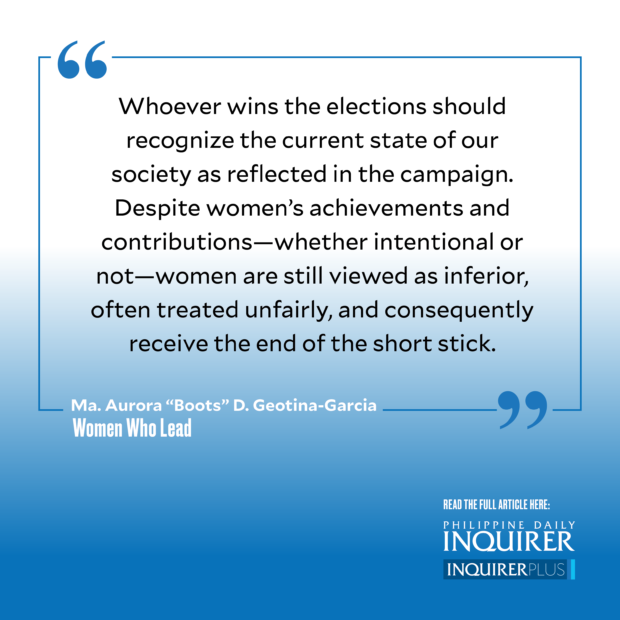 After months of the national and local elections campaign where we witnessed emotions at a high and even some tempers strained to the limit — dust is finally starting to settle and we have come to our most critical contribution to the election: our vote.

As women empowerment and gender equality advocates, we must stress the importance of introducing and implementing women and gender-equal centric policies in society. Regardless of the gender of the candidate, we must constantly look for the gender agenda in any candidate’s platform as being a champion for women’s rights and welfare should be the concern of all.

Whoever wins the elections should recognize the current state of our society as reflected in the campaign. Despite women’s achievements and contributions — whether intentional or not — women are still viewed as inferior, often treated unfairly, and consequently receive the end of the short stick.

As the growing body of research shows and as we have also seen over the past few months, women in politics are disproportionately targeted by “gendered disinformation” campaigns that feature fake stories and threats, as well as humiliating and sexually charged messaging. We have witnessed instances where massive disinformation or “fake news” moved to destroy women’s credibility, possibly a reason why some women do not pursue political careers.

Pushing women out of the political arena is a reflection of our society’s more problematic patriarchal culture where women are pushed out of a room, sometimes silenced and not having their voices heard, and being left out of opportunities.

We need leaders who not only protect women but elevate them; political leaders who will introduce policies that will provide the skills and support for women to thrive. We need the next administration to govern with a gender lens, and we need legislators who will pass laws that will seek to redistribute the burdens that society usually puts on women’s shoulders alone.

We need governments, organizations, and society to give women a voice and a seat at the table — not just as the bare minimum but as an integral, coequal force. It bears repeating: Having a diverse, gender-balanced, and inclusive organization should no longer be just an option — but an utmost priority.

As our nation is now at a crossroads, I urge you to vote with a gender lens, and to vote for the protection of the vulnerable sectors that continue to be disproportionately affected. My appeal is for you to cast your vote with justice, equality, honesty, and integrity in mind.

Just as they say, “Campaign in poetry, govern in prose” — after the May 9 elections, whoever wins must work toward pushing for these changes. This, after all, is the cornerstone of the women empowerment, gender equality, and diversity and inclusion advocacies and should also be at the core of how our political leaders should govern and lead — everyone is and should be welcome and be included regardless of status, influence, or political color. As we move forward after the elections, we must ensure that we leave no one behind.

Ma. Aurora “Boots” D. Geotina-Garcia is the founding chair and president of the Philippine Women’s Economic Network. She is also the co-chair of the Philippine Business Coalition for Women Empowerment and the co-convenor of the Male Champions of Change Philippines.

Women Who Lead is an initiative of the Philippine Women’s Economic Network (PhilWEN).