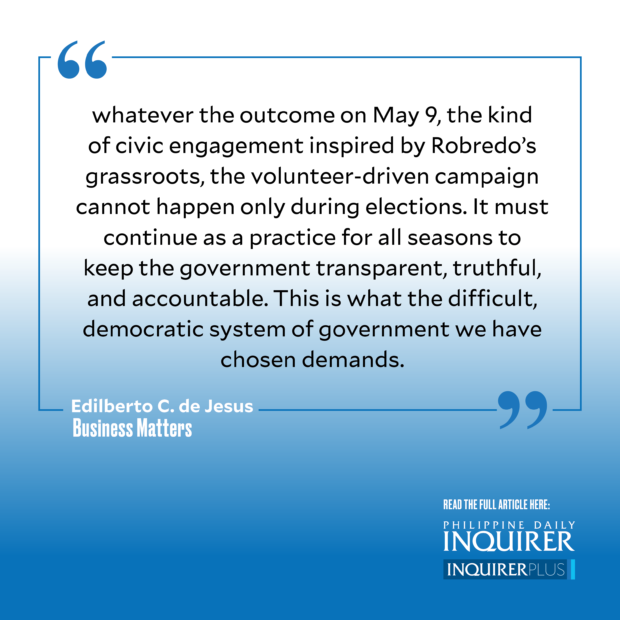 Whatever the outcome, the 2022 election campaign has been confounding. “Weird” was retired CJ Panganiban’s observation on poor-performing candidates attacking second placer Vice President Leni Robredo, rather than front-runner Ferdinand Marcos Jr., about whom they professed more serious concerns. In 1985, opposition leaders sacrificed personal ambitions to support the candidate who could best rally the people against the Marcos regime. With the 2022 race reduced to a two-person contest, excluded were candidates who continued personal, image-boosting campaigning to demonstrate their “consistency” and determination. They thus abdicated any responsibility to help elect whomever they considered the lesser evil.

Also exceptional, President Duterte declined to bless any of the nine cocks in the presidential sabong. Successful presidents look for successors to preserve their legacy achievements. Failed presidents need protection from their failures. Finding a suitable proxy should be simple; candidates covet presidential endorsement. For Mr. Duterte to declare “neutrality,” after claiming he had confidential information on the corruption and drug habits of candidates, would seem a grave dereliction of duty to the country.

Candidates, however, have appeared uncertain about the value of an anointment. Even Sara has avoided embracing her father’s flagship programs. Recall negative survey responses on high-profile public issues: the closure of ABS-CBN; EJK charges related to the conduct of drug and counterinsurgency campaigns; Chinese harassment of Philippine fishermen in the West Philippine Sea; pandemic corruption accompanying draconian lockdown regimes.

While candidates crave airtime, an expensive, essential campaign tool, Marcos Jr. refused to join the election debates. Participation in any free-wheeling forum would have exposed him to questions, not only about his family history and his own legal problems; it would also have permitted rival candidates, media, and voters to probe his support for the administration’s approach to such issues as corruption, political dynasties, pivot to China. Toxic contamination can come from the endorsement of a president accountable for unpopular policies.

With a 10-year head start to revise history, Marcos Jr. has conducted a campaign anchored on social media networks he can control. Without any obligation to authenticate authorship or accuracy of content, social media is much more easily weaponized for political purposes. Technology permits the broad and instant spread of disinformation, making even heavier the burden of countering the lies it contains.

Social media can also target specific population groups, reinforcing the pressure that can be exerted by the political dynasties Marcos Jr. has courted (Arroyo, Cayetano, Estrada, Remulla, Villar, et al.) to condition responses to opinion surveys. But even polling agencies have warned about factors that undermine the scientific survey process, including corruption, intimidation, and disinformation, turbo-charged by troll farms and bots. How respondents answer survey questions from strangers would not necessarily predict the actions of voters in secret.

Disdaining the Marcos Jr. hide-and-seek tactics of evasion and concealment, Robredo has braved interrogation in unscripted media encounters. The exceptional, defining difference between the two campaigns has been Marcos Jr.’s dependence on virtual, online platforms, and survey reports against the personal, physical, public response to Robredo’s call to voters. Her unpaid supporters have gathered in mass rallies and participated in house-to-house visits, bringing provisions for themselves and others.

Compare the variety, number, and character of civil society institutions and personalities committing to either candidate. Many schools, including the top three Baguio universities, have declared for Robredo. How many schools have endorsed Marcos Jr.? Professionals usually protective of their privacy, like high-end doctors, accountants, lawyers, have appeared in campaign videos for Robredo. Even more openly than in 1985, individual priests and members of religious orders have cast the 2022 presidential choice as a moral issue and have chosen Robredo. Apart from fugitive Pastor Quiboloy, which moral leaders have openly endorsed Marcos Jr.?

If he could have his way, Marcos Jr. would dispense with elections to count the ballots of 67 million voters; survey results, based on 5,000 respondents, already assure his victory. Maybe. But whatever the outcome on May 9, the kind of civic engagement inspired by Robredo’s grassroots, the volunteer-driven campaign cannot happen only during elections. It must continue as a practice for all seasons to keep the government transparent, truthful, and accountable. This is what the difficult, democratic system of government we have chosen demands.