The logic in the illogical | Inquirer Opinion
Close
menu
search

The logic in the illogical 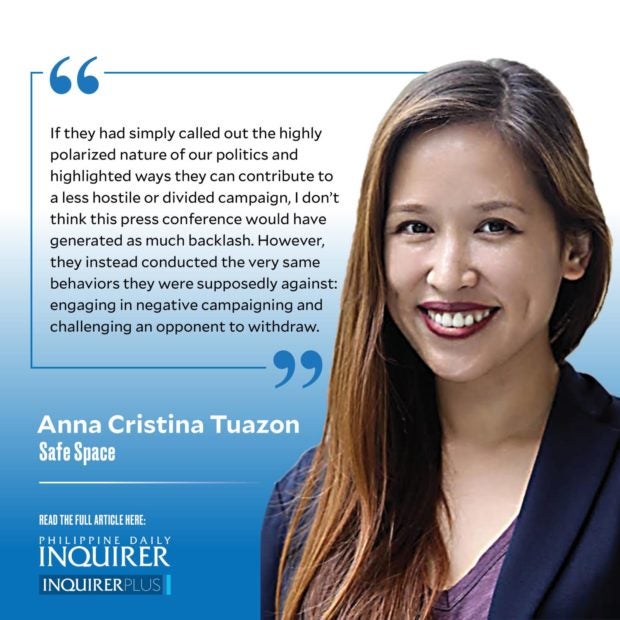 Politics apparently does not slow down even on Easter. Presidential candidates Domagoso, Lacson, and Gonzales along with some of their tandem mates had called the now-infamous press conference with the original intention of declaring their intent to continue running their campaigns amidst what they perceived as pressure to withdraw. However, they muddled their own message of unity when Domagoso challenged VP Robredo — considered to be in the No. 2 spot — to withdraw. The so-called “united” team fell apart as Lacson quickly distanced himself from the statement while Gonzales issued an apology to Robredo. Domagoso’s own running mate said he disagrees, while Pacquiao’s camp described it as “divine intervention” that his flight prevented him from joining the ill-fated press conference. Fingers were pointed at media for asking questions that prompted them to share how they felt about Robredo’s campaign. The nerve of the press to ask political questions in a press conference!

My first reaction was befuddlement. It just didn’t make sense. Why attack and impugn the candidate in second place? Why would candidates pool together their political power just to bring her down? What would they gain by attacking her character and credibility? Being No. 2 won’t make you president as far as I know. This is why Robredo’s campaign is working hard to narrow the gap in a bid to overtake first place. So why are these three candidates scrambling to become No. 2 instead of No. 1?

When events seem illogical or irrational, it means we are missing crucial information that would make it make sense. In behavioral analysis, a reoccurring behavior is never random. There is always something that prompts it. This is true for tantrums, for sleep problems, and even for mood issues. A behavior that seems random and comes out of nowhere only means we need to look more closely and try to understand that chain of events: what events prompted the behavior and what consequences did they hope to gain. With these, we can identify the function that this behavior serves. Do tantrums serve as a way to get attention from the parent? Or do they serve to get them their preferred toy or candy? Or does it delay or help them escape from nonpreferred situations like homework? Only then will tantrums make sense and we can respond accordingly.

Political behavior isn’t exempt from the principles of behavior analysis, except that we also need to consider functions such as amassing power, money, or ego. A bridge to nowhere? Someone made money from that. An agency insisting on very costly but ineffective programs? Someone definitely made money from that. Using one’s position and authority to remove checks and balances? Someone wants to increase their power. Using majority of your political resources toward discrediting your opponent at the expense of neglecting real societal problems? Someone’s ego got hurt.

Is there a productive way to call out perceived injustices in the campaign? Of course. If they had simply called out the highly polarized nature of our politics and highlighted ways they can contribute to a less hostile or divided campaign, I don’t think this press conference would have generated as much backlash. However, they instead conducted the very same behaviors they were supposedly against: engaging in negative campaigning and challenging an opponent to withdraw. Domagoso doubled down on his call for Robredo to withdraw by saying that he is just giving Robredo “a taste of her own medicine.” The function of his behaviors, then, seems to be simply to exact revenge.

How a candidate reacts to perceived slights and insults is telling of their character — and more importantly, how they will dispense justice as a public official. If their tendency is to exact revenge, then they will actually foster the feuding-families type of politics they claim to abhor, with Filipino citizens as collateral damage. Revenge takes up emotional and mental resources that will take away from attention spent on real issues that Filipinos are grappling with, just like how the press conference ignored questions on the response for victims of Typhoon “Agaton.” Instead, I’m hoping to see a candidate demonstrate a preference for restorative justice, the approach that focuses more on repair rather than retribution. A candidate that upholds such a value will spend majority of their efforts in envisioning how this nation can heal after such a divisive election. They will strive to embody and develop themselves as the ideal candidate that will be best for our country rather than engage in undignified and petty behaviors just to put down an opponent. The real unity pledge I’m interested in is in getting a genuine commitment to put the Filipino’s needs first, both during and after the election, rather than what positions they will give each other if they win.