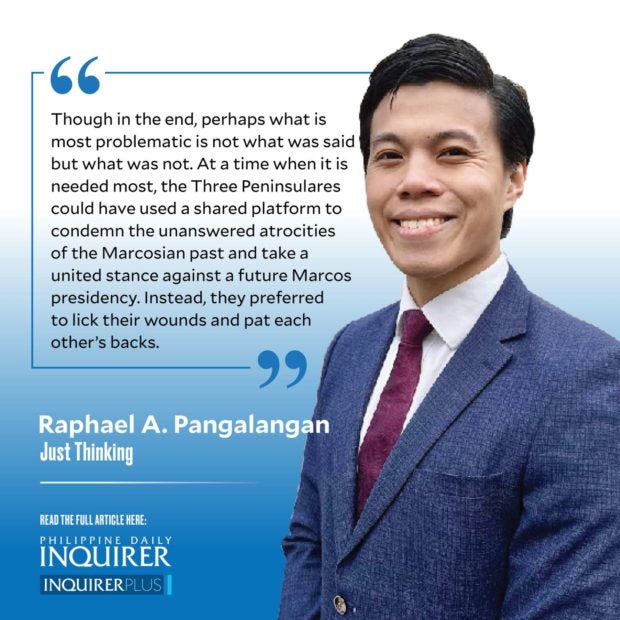 Christianity’s Easter Sunday, Islam’s holy month of Ramadan, and Judaism’s Passover met on the same day for the first time in 30 years.

On that same day, presidential candidates Manila Mayor Isko Moreno Domagoso, Sen. Panfilo Lacson, and former national security adviser Norberto Gonzales — all of whom trail Vice President Leni Robredo in the latest presidential survey — met at the Manila Peninsula. For two hours, the “Three Peninsulares” ranted and raved about their underwhelming survey results in what was apparently an anti-Robredo press briefer.

April 17th may therefore be remembered, for better or for worse, as a period of convergence. Around the globe, it was a special day across faiths. But in the Manila Peninsula, it was a day for spectacle and politics. While Leni has her eyes set on preventing “public enemy number one” from reaching Malacañang; Isko, Lacson, and Gonzales came together to call for a “new number two.” They cried: “’Di pa tapos ang basketball/boxing!” (The basketball/boxing match ain’t over!)

First of all, whatever happened to delicadeza? Clearly, only one presidential candidate has the right to invoke the old sports adage, and that is Sen. Manny Pacquiao. After all, he was a professional athlete in both the ring as well as the court, briefly (thankfully) playing with the Philippine Basketball Association.

Second, certainly it isn’t just me who thinks that the presidentiables in the Peninsula fail to inspire confidence. While one would think that aspirants for the highest seat in the land would spend their money and their minutes trying to win the elections, these three spent their Sunday afternoon fighting for second place.

Perhaps the presidential candidates should be reminded that there are no consolation prizes awarded in a presidential race. To echo sports analogy: the saying is to “Go for gold!”; not to “Settle for silver!” Yet here the Three Peninsulares seem too happy to finish as runners-up. Rather than giving a pep talk, they appeared to throw in the towel.

Now Isko, Lacson, and Gonzales would be quick to explain that they are not settling for second and are simply reminding the voting public that the presidential race goes beyond two candidates. In so doing, they act as if the Pinoy is deprived of a political choice to vote for them—the third, fifth, and 10th in rank—so long as Leni is in the race.

Their reasoning is flawed. They fail to realize that it was precisely the Pinoy who ranked them so lowly in the first place.

The Peninsula press briefer is a goldmine for leaps in logic, it could be made into a game of “Spot the Fallacy.” The Three Peninsulares refuse to withdraw allegedly out of respect for democratic choice, yet Isko explicitly calls for Leni’s withdrawal? That’s a self-contradiction! Lacson claims that Leni sought his withdrawal on the basis of common sense, correlation, and cui bono? That’s a non sequitur! It simply does not follow.

But perhaps what is most baffling about this situation is the Schrödingerian status of the election survey itself. The presidentiables in the Peninsula believe that the election survey was rigged, and Isko goes as far as to “guarantee” it. Yet if the presidential survey is indeed manipulated and fails to reflect the truth in the trenches, then why all the fuss over their ranks at all?

In one moment, the Three Peninsulares claim that the election survey cannot be relied on. In the next, they turn around and rely on the very survey they refute, cry foul over their dismal results, and blame the higher-ranked Leni for their political woes. Like Schrödinger’s cat, the election survey is simultaneously dead and alive. It is disputed yet admitted.

Though in the end, perhaps what is most problematic is not what was said but what was not. At a time when it is needed most, the Three Peninsulares could have used a shared platform to condemn the unanswered atrocities of the Marcosian past and take a united stance against a future Marcos presidency. Instead, they preferred to lick their wounds and pat each other’s backs.

But on the bright side: At least they did it in the name of democracy. Right?

Talk about cold comfort. The Filipino people deserve so much better.