All eggs and fury, signifying nothing 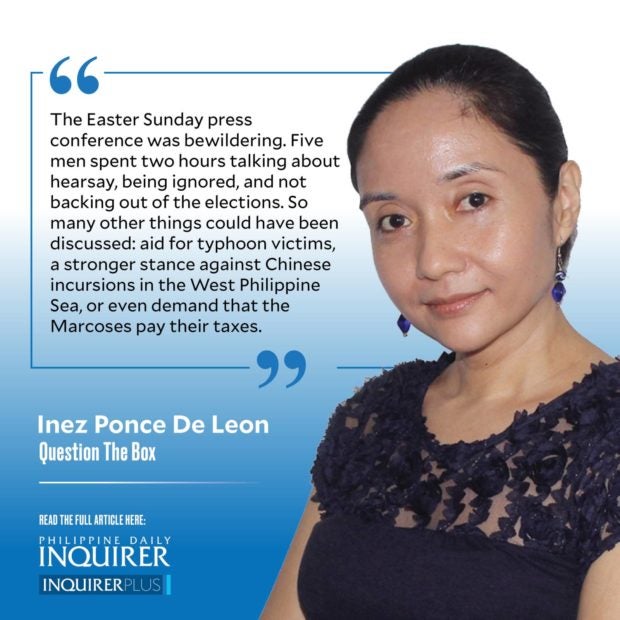 I use mock press conferences as an end-of-semester assessment to measure how well students understand social issues, articulate advocacy, and respond to questions from the press.

The Easter Sunday press conference, therefore, was bewildering. Five men spent two hours talking about hearsay, being ignored, and not backing out of the elections. So many other things could have been discussed: aid for typhoon victims, a stronger stance against Chinese incursions in the West Philippine Sea, or even, as fellow Ateneo faculty member Dr. Leland dela Cruz put it, demand that the Marcoses pay their taxes.

What was that press conference even for? To answer this question, I undertook inductive qualitative analysis on what the candidates (aka The Five) said during the press conference. This process entailed systematically extracting overarching themes to reveal how The Five construct the reality of the elections.

The Five presented themselves as the unselfish superheroes who would save a brainwashed citizenry from the election drama of contrasting colors. They declared that people were being fed fake images of pink crowds that did not exist, and that these crowds had been infiltrated by the lawless and warmongers. The election underdog supposedly tried to force The Five to withdraw themselves from the race by stripping them of their supporters. Sen. Ping Lacson, in particular, had no evidence to show for the claims, but asserted that he needed only to deduce conclusions from common sense and investigate nothing further.

The Five framed the citizenry as all ears, no brain: People supposedly support only two candidates because they hear nothing about their other choices. There are no real Marcos loyalists, only desperate voters forced to choose him because they hate the alternative. To save voters, The Five need to use their superpower of Extreme Influence: They will remind people that other presidential candidates exist, which will magically enlighten voters and make them change sides. Those who protest are simply paid trolls.

To move forward (though Lacson disagrees), Vice President Leni Robredo has to “be a hero” and withdraw, so that other presidential candidates can get their turn at fighting Marcos Jr. These recommendations are based on surveys, which, ironically, The Five do not trust: Norberto Gonzales said that the upper classes are deliberately unrepresented, and Manila Mayor Isko Moreno said that oligarchs have infiltrated the surveys. Neither of them presented any proof of their claims.

Through the two-hour tirade, there was no mention of Leni’s achievements as a possible reason for The Five’s low numbers. Instead, they blamed their lack of popularity on blind followers who would destabilize the government because of their obsession with the top two opponents. Later, they blamed the media’s line of questioning for making the press conference an anti-Leni affair. To The Five, all their missteps were someone else’s fault.

When Moreno was confronted by the fact that Leni had never said anything about destabilization because of her losing, he simply brushed off the correction.

When Lacson was faced with the twin ideas of macho politics and a press conference after a major disaster, he gave a curt response: Your question does not deserve an answer.

The Five never addressed the reference to typhoon victims during the press conference. In so doing, they revealed how they perceive the citizenry: ignorant, manipulated, driven either by ignorance or hatred. The Five want people to simply obey them and believe everything they say, absolving them of any responsibility for backing up their claims with actual evidence.

The opponent they tried to destroy, in the meantime, was spending a quiet Sunday lunch in her province with the Sumilao farmers, for whom she had once been legal counsel, and who were now marching across the country to support her.

In the capital, The Five felt ignored, so they screamed at what they assumed was an idiotic electorate. In a corner of Naga, Leni Robredo sat down with people who had once been truly ignored by the system. She did what a leader should always do first: listen.

The press conference was never about serving the people. It was simply a joint campaign by The Five to comfort themselves with conspiracy theories and expensive food.