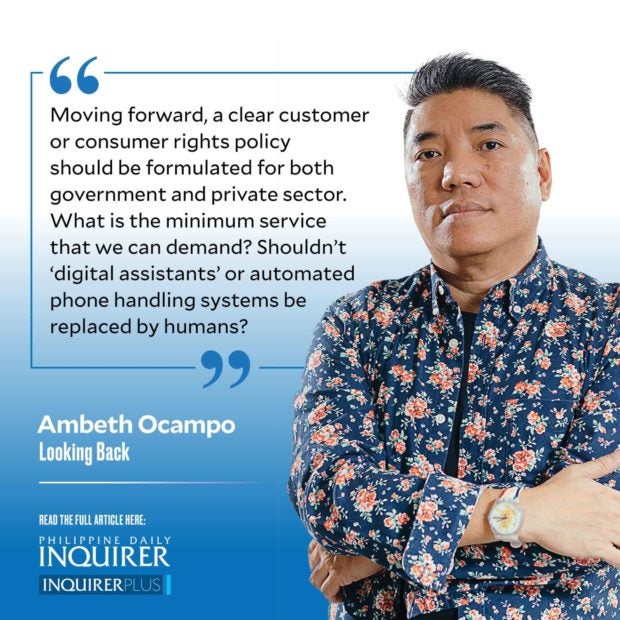 Red tape and incompetence are not a monopoly of government. I found that out by enduring what passes for “customer service” at Globe Glorietta last week. Replacing a defective SIM card should not take more than 10 minutes, but it took me two visits in one day and almost three hours to complete a simple transaction. Good public relations and corporate social responsibility cover Globe’s lack of genuine customer service. Their website does not provide a contact number or email for complaints. Globe Messenger has “Gie the digital assistant” whose useless automated replies irritated me even more. There seems to be no way to talk to a human customer service representative, unless you are a Globe Platinum subscriber, leaving many of us to hours of waiting in a physical store. Some people who made online appointments were made to deal with a “bot” from a physical store.

What complicated a simple SIM change was that the phone I have been using, and paying for the last decade with no incident, is registered under my sister’s name. She took the trouble to get phones for all family members. A simple email from the account holder followed by a voice call to verify her identity should suffice but Globe requires a notarized special power of attorney (SPA) to have my SIM changed. While there are many cases of fraud and SIM switching these days, an SPA does not solve the problem. I did not argue because the rules were beyond the attending clerk’s pay grade. I returned with the SPA a few hours later and was made to sit in front of four customer service windows, only two of which were being attended to for about 45 minutes. I was not given a number, the monitor that indicates who comes next was not working, but I held on until there was only one clerk left and three vacant windows. He called out some names twice, nobody approached the window, so I asked when I would be attended to. He told me to wait and disappeared into the pantry for 10 minutes. When he returned he called out the same names again, making me wonder why he insisted on calling out online appointment no-shows when there were physical customers in the waiting room. I counted four, perhaps five, employees in the pantry “preparing to go home” for over half an hour. Had each of them taken the initiative to attend to the five waiting customers this story would end happily for everyone.

When I posted my Globe experience on Facebook, it generated 3,900 angry emojis instead of likes. There were only two or three positive comments and over 1,500 complaints on the thread proving that what I experienced was not an isolated incident. It seems the isolated cases are happy customers. In stark contrast to Globe was Makati Medical Center which I visited the same day for lab tests. I was attended to by “Neil” who processed my requests and noticed that my letter of authority (LOA) expired that day. Instead of taking the easy way out, telling me to return with an updated document, he told me to take a seat while he called Lacson & Lacson insurance, which promptly sent a new LOA by email. “Neil” attended to me every step of the way to blood extraction and explained the 24-hour urine collection. His job was just to process my lab request but he obviously took pride in his work and solved rather than ignored a problem.

We should not compare apples and oranges, or in this case Globe and Makati Med employees, but all it took was one person to make a difference that day. If the Philippines has more problem solvers than problem generators, our world would be a better place. While Globe reached out to apologize, I think, moving forward, that a clear customer or consumer rights policy should be formulated for both government and private sector. What is the minimum service that we can demand? Shouldn’t “digital assistants” or automated phone handling systems be replaced by humans? Shouldn’t staff make eye contact with customers and find ways to resolve issues rather than resort to red tape and unnecessary requirements? Globe taught me last week that Filipinos are truly patient because things do not have to be the way they are.