Sex as a shaming tool 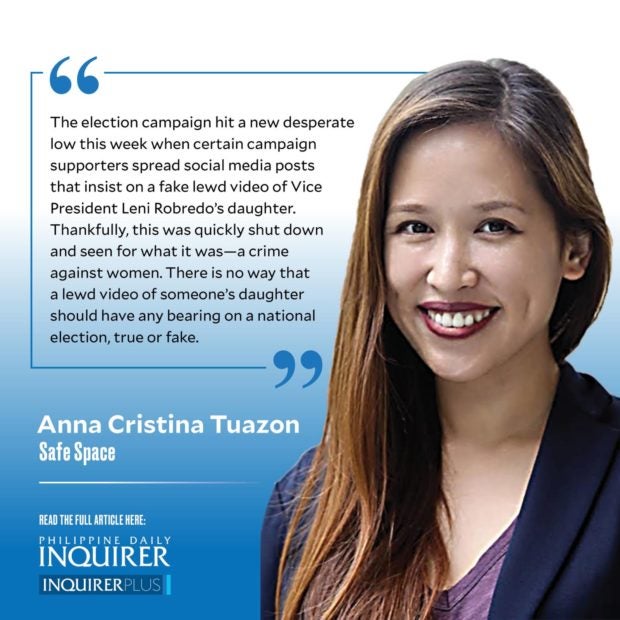 The election campaign hit a new desperate low this week when certain campaign supporters spread social media posts that insist on a fake lewd video of Vice President Leni Robredo’s daughter. Thankfully, this was quickly shut down and seen for what it was—a crime against women. There is no way that a lewd video of someone’s daughter should have any bearing on a national election, true or fake. At best, such a video is simply irrelevant. At worst, it traumatizes and terrorizes the victim of malicious disinformation. It is very disheartening that this shaming strategy still exists. It seems to be fair political game to use sexuality as a way to shame and discredit individuals. It also must be said that most victims of such blatant shaming are women.

Our country’s relationship with sexuality has never been truly healthy — or consistent. We invoke very conservative views on sex (e.g., sex only within marriage, sex only for the purpose of procreation), yet find it completely acceptable for men to engage in infidelities and have multiple families — whose wives, mind you, did not consent to such an arrangement. We insist on our religiosity and family values, yet have harbored and nurtured a generation of public officials who regularly make denigrating and lewd statements toward their female peers without consequences. There are strong oppositions to sex education on the basis that providing such knowledge will promote promiscuity — yet it is sexual ignorance that leads to harmful and abusive sexual attitudes and behaviors. Worst of all, we treat sex and sexuality as something shameful and inherently immoral.

Shame is not an instinctive or organic emotion — it is learned. It is society that taught us the concept of shame. According to dialectical behavior therapy, we feel shame whenever we are rejected by a person or group that we care about if certain aspects of ourselves are made public. Thus, it is the perceived or feared rejection of others that causes shame. It is important to note here that the existence of shame does not necessarily mean that the person has done anything wrong — only that society does not approve of it.

Shame has its productive uses. Society can make use of shame to ensure that people do not harm each other, as in the case of the social unacceptability of child sexual exploitation and abuse. We are taught early on that there are some behaviors that society does not accept — just look at the Ten Commandments and you will find social rules. Shame can motivate us away from violating such rules. If we consider ourselves as a family-oriented culture, then it should be shameful to disrespect our parents. If we consider ourselves a collectivist nation, then it should be shameful to focus on our own gains and disregard the concerns of the community.

What happens, though, when shame is misused or exploited? Some societies and groups can use shame to discriminate and disenfranchise minority groups. Shame is misused when society rejects individuals and groups for characteristics that are not inherently harmful but instead are rejected due to prejudice and stereotypes. Dominant beauty standards misuse shame all the time — some people feel ashamed of the color of their skin, the texture of their hair, and the shape of their bodies. The beauty industry can, in turn, exploit this shame to promote their products and profit off of shame.

When it comes to politics, players exploit the shame our society has erroneously placed on women’s sexuality for their own gain. When women are targets or victims of sexual exploitation—such as being filmed without consent, distribution of such content without consent, or manufacturing of fake sexual content or “deep fakes” — they are shamed instead of protected. (I previously wrote about the culture of victim-blaming, particularly toward women of sexual crimes — see the Feb. 2 article “Rape, abortion, and consent.”) Political players know that even if their strategy to propagate false news about an opponent or their families’ sexual impropriety is exposed, the damage has been done and is, in some ways, irreversible. There is an unfortunate and unjustifiable loss of respect in our country for women whose sexuality has been brought into the narrative, with or without consent. It is this injustice that women often face within their families, in schools, in communities, in their workplaces, and in politics. Our country cannot seem to tolerate that women are sexual beings and that they have the sole right both to express and control their sexuality. Sexual violence occurs to remind women that they cannot be in control of their own bodies. Sexual shaming occurs to remind women that they cannot express their sexuality. It is high time that we refuse to allow politics to use sex as a shaming strategy against women.