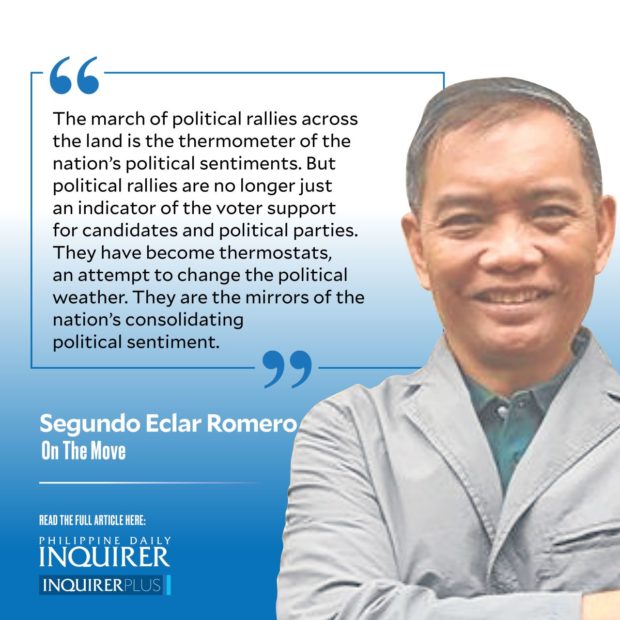 The main public display of voter sentiment is now the political rally. While ultimately the count of the people at the highest point of attendance is an important comparative indicator, it is not the only one.

Other indicators would be (1) the average length of stay of the participants in the rally—the longer the average stay, the stronger the political preference; (2) the level of participation in the rally, which includes attire and paraphernalia (colors, posters); (3) the attentiveness and responsiveness to the speakers, like cheering, answering questions, singing, hand-waving, swaying, and dancing; (4) group identification and differentiation from the “other side” by responding to sarcastic or lampoon references to that side; and (5) goal-oriented behavior such as keeping a certain decorum about collective safety and environmental clean-up after the rally. Using these indicators, I see the Leni-Kiko rallies have been much bigger and more responsive, spontaneous, and empathetic.

The gargantuan rallies may have started with the panic the privileged class felt when the repeated dismal tale of the voter preference surveys purportedly showed that VP Leni’s voter preference score was bumping against a “glass ceiling.” The panic opened the financial, human, and creative resources of the privileged class. Youth, students, professionals, matrons, executives, movie and media personalities, artists furiously stepped out of their comfort zones and fanned out into the periphery to self-fund, organize, and deliver political rallies, flash mobs, wall murals. At the start, the initiatives, along a broad front covering design and production of campaign materials, organizing supporters, holding rallies and house-to-house campaign, were disjointed but lately have snapped into alignment. The creative execution of the rally venues and dynamics have become more sophisticated and professional.

Something is happening in Leni-Kiko rallies. People join not only to signify political support. They seem to also find social identification and personal gratification. The creation and staging of these political rallies seem to build on the pent-up desire of the people for the fiesta, the spontaneous creation of an atmosphere of intense collective energy created by upwards of 50,000 people. The ability to create and be part of such a human landscape bigger than self is what is attracting people to these events.

When the mammoth Cavite rally repudiated their political mullahs, Gov. Jonvic Remulla and Rep. Boying Remulla, with a massive display of Leni support, there emerged a silent contest for bigger rally crowds. These rallies became transformed. When it was their turn, the Leni-Kiko rally became an excuse for the Pangasinenses to host a bigger fiesta than Cavite, complete with hermano and hermana mayor making sure the cultural shows were delightful and the rally stage pulsating with colored lights.

But Pampanga, the home of the eternal Christmas parol, cannot be outdone, so we see the Pampangos straining to outdo themselves, dazzling the event with lanterns, serving a thousand kilos of sisig for the fiesta. At one point, the firefly effect of smartphone lights waving to the music in the dark was just exquisite. There is no stopping this rally dynamic. As for matching the humongous Pasig rally, well, wait until Makati makes its move.

This dynamic is no longer just about a political campaign. There is something spiritual and magical about this civic effervescence. It is almost like a slo-mo people power event. There seems to have emerged a collective psychological awakening. The movie “Himala” comes to mind, the need for the people to believe in something, and religious mental pathways are never far behind. I realized this when I saw a homemade poster held by a teenager in Pampanga, it read MiracleNiLord—“leNi” in the center was highlighted in red.

Meanwhile, there is a furious debate on Facebook about the meaning of the latest Pulse Asia survey. There is an amusing surrealism about this tempest in a teapot. Oftentimes, we are fixated on lagging, not the leading, indicators. The weather bulletin on TV may be telling us the storm holds sway, but I look out the window and I see the bright sun.