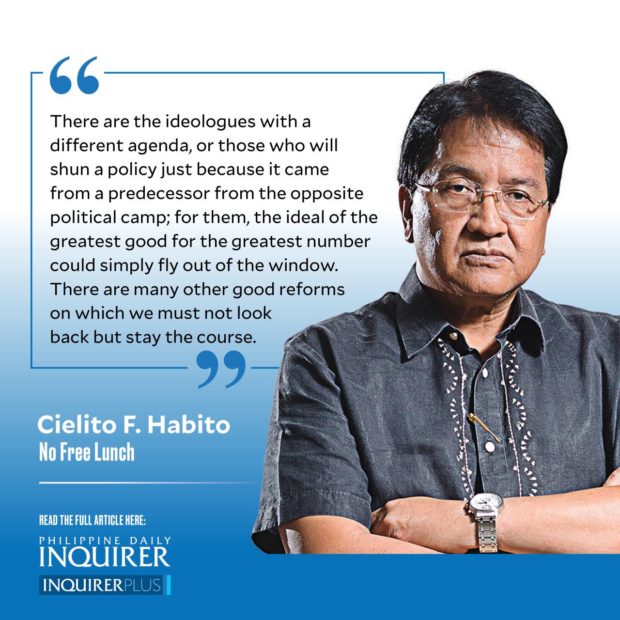 I have one fervent hope for our next leader, whether it’s the one I pray for every night, or the one whose popularity rides on falsehoods systematically planted in unquestioning minds. I hope s/he will not look back and reverse crucial economic reforms deliberately put in place by this and past administrations—and there are many. I see four possible reasons behind vocal calls to backtrack. One could be a lack of awareness and/or proper appreciation of our economic history. Two, it could simply be short memories. Three, it could be the lack of patience to wait for the eventual benefits of a measure to play out, especially when short-term transition pains must come along the way. Or four, it could be rooted in ideology, or worse, plain politics.

Take the misguided call to restore regulation and price control in the oil industry, in the wake of the rapid price hikes the world has seen in recent weeks. This is not the first time we’re seeing this phenomenon; we’ve gone through similar oil price volatility since the early 1970s. Our government was led to regulate the industry then and manage petroleum product prices all the way up to 1998, when regulation was lifted. Anyone 45 years old or younger wouldn’t recall how messy things were under regulation—and how we ended up with even more drastic petroleum price movements than warranted. I need not repeat the story I wrote on it recently (“Re-regulate the oil industry?”, 3/8/22). But when those of my generation push to bring back oil industry regulation, I can only surmise that they must be of the second type with short or failing memories.

Rice tariffication, or the conversion of long-standing rice import controls to equivalent import tariffs, is another favorite whipping boy of anti-reformists, and some political candidates find it expedient to mouth the populist but misguided rhetoric. I’ve written much on the topic, and the bottom line is that our rice farmers need all the support to effectively nurture them for higher productivity, lower production costs, and improved competitiveness—not by shielding them from competition. The latter only led domestic production cost (hence price) to move higher and higher above world price through time, and made the government complacent on providing true nurturing support. In the process, 100 million Filipino consumers suffered the collateral damage of higher-cost rice, leading some 20 million poor deeper into food insecurity, all in the name of helping 2 million rice farmers and their families. This is possibly our most lopsided and distorted economic policy to persist for decades. Through it all, billions in taxpayer money were paid for rice imports that only the government was allowed to do. Tariffication has now turned that around, and instead raises tens of billions of pesos in tariff revenues used to help nurture the farmers to higher productivity, and ultimately, lower rice prices for all — a true win-win.

We always knew that its full benefits would not be felt overnight, and a painful transition was inevitable, especially for the least capable farmers, for whom we argued for transition cash assistance. Indeed, the positive effects are already being seen, including record rice production growth in the past year. To reverse the reform in fear of the transition pains would be to thwart what’s poised to be the most game-changing reform to reshape Philippine agriculture toward the same dynamism seen in our Asean neighbors. Patience, coupled with adjustment assistance to adversely affected farmers, is the way to go, not backtrack and return to the old order that progressively pushed us deeper and deeper into the rut.

And then there are the ideologues with a different agenda, or those who will shun a policy just because it came from a predecessor from the opposite political camp; for them, the ideal of the greatest good for the greatest number could simply fly out of the window.

There are many other good reforms on which we must not look back but stay the course, but my space has run out. Perhaps, I will write on them when the danger of reversal becomes imminent—even if the candidate I pray for every night does become our next president.