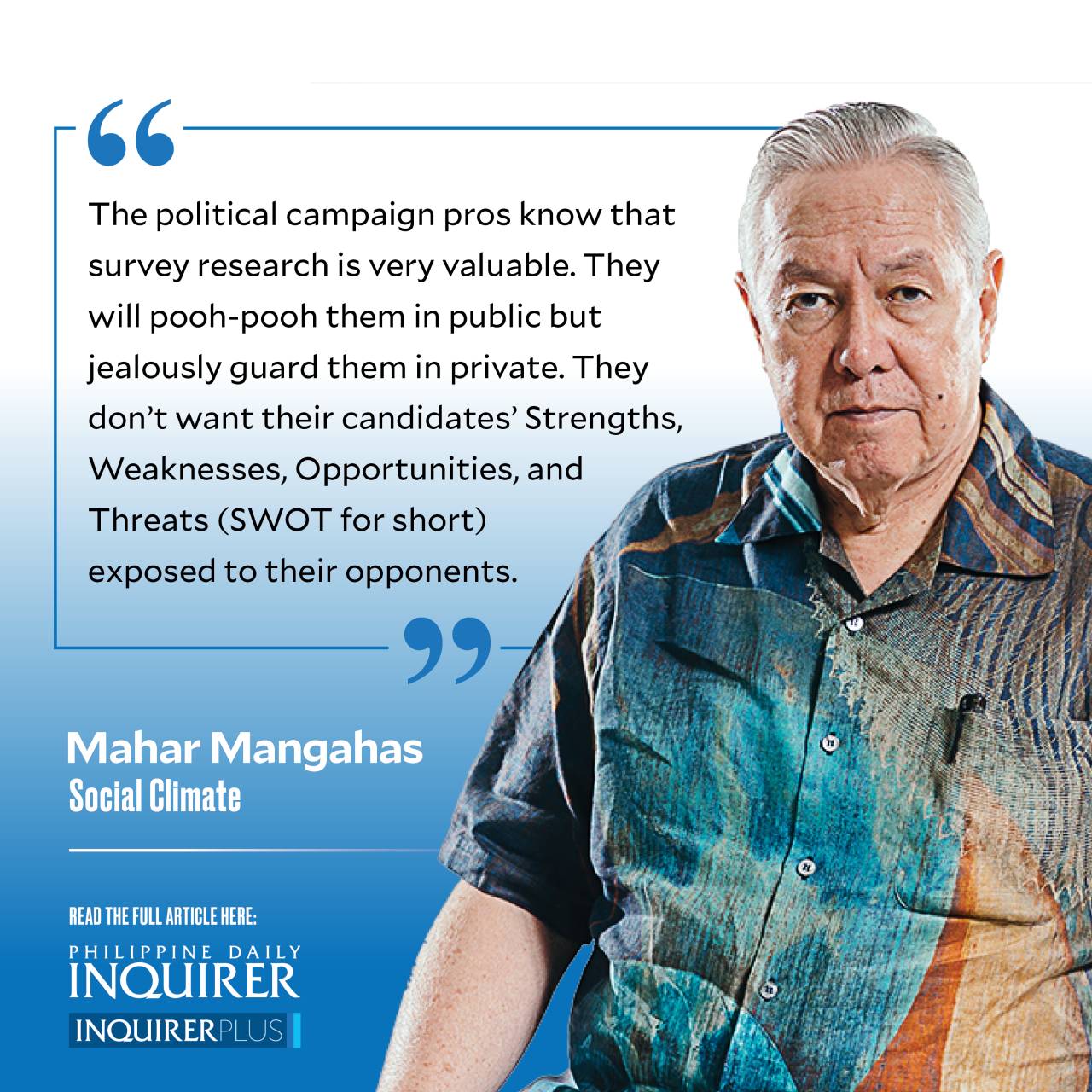 Recently a fellow columnist claimed that Social Weather Stations did an election survey on Jan. 28-31, 2022, and that SWS released the results on Feb. 16, 2022 (see Joel Ruiz Butuyan, “Probing the surveys,” 4/7/22). Yet anyone who checks will see that there is no such SWS report posted on www.sws.org.ph, which would be the legitimate basis for the claim.

In my earlier column “The election survey scene” (3/19/22), I made it clear that Social Weather Stations has not been publishing any horse-race statistics for 2022, simply because, for the first time since 1992, it has no media sponsor in the current presidential election season.

My column listed the many media companies that sponsored SWS election surveys from 1992 to 2016. There was likewise no media sponsor in off-year 2019, and so SWS published nothing that year. Why media companies are shy this time around is for them, not SWS, to explain. Let it be a challenge to investigative journalism.

Election surveys matter for professional credentials. Success in predicting elections is the historic litmus test for the quality of survey research, ever since George Gallup’s poll predicted the re-election of Franklin D. Roosevelt in 1936, contrary to the prediction of the magazine Literary Digest, based on a coupon-clipping system.

To earn their credentials, all newcomers to survey research should certainly try their hand at election prediction. Do it small scale, at the local government level, and surprise yourself that it works.

Social Weather Stations, for its part, has the longest, most successful, track record, and does not need to further prove itself. The presentation by Leo S. Laroza, “Do polls influence elections?” (Asian Conference for Political Communication, Singapore, 9/5/2017; reposted on the website, 3/16/22), summarizes the SWS surveys as of the 2016 election.

By the way, the short answer to the question in Laroza’s title is: OPINION POLLS HAVE VERY LITTLE INFLUENCE. Their limited effect on preferences among candidates was found by SWS surveys that asked voters, after they had voted, if they knew about such polls, and to what extent, if any, the polls affected them.

Open election surveys are the exception, not the rule. The political campaign pros know that survey research is very valuable. They will pooh-pooh them in public but jealously guard them in private. They don’t want their candidates’ Strengths, Weaknesses, Opportunities, and Threats (SWOT for short) exposed to their opponents.

Survey research is a means for every contender in an election to discover the SWOTs of all the other contenders. The real trick is in knowing the right questions to ask, and then keeping the questions a secret. Those who know the critical questions can use science to find the answers. The talent of the best political campaigners is in their know-how in guessing the SWOTs of the candidates.

The SWS survey embargo is three years at most. In privately commissioned surveys, including election surveys, the contract with SWS assures confidentiality for at most three years after project completion. An embargo can end earlier, at the discretion of the research sponsor.

All original raw data, whether about elections or not, are archived by SWS, and become open after the end of any embargo period for research by the social science community. This now includes the hundreds of SWS surveys related to the 2016 election, or earlier. Of course, SWS reserves the right to set conditions, including access fees, comparable to those of the social survey archives that academics in other countries use.

Archived survey data do not get “old”—“stale” is the journalistic term. Such data are historical, and forever. They are literally priceless: There is no price at which a survey that has been done can be later redone.