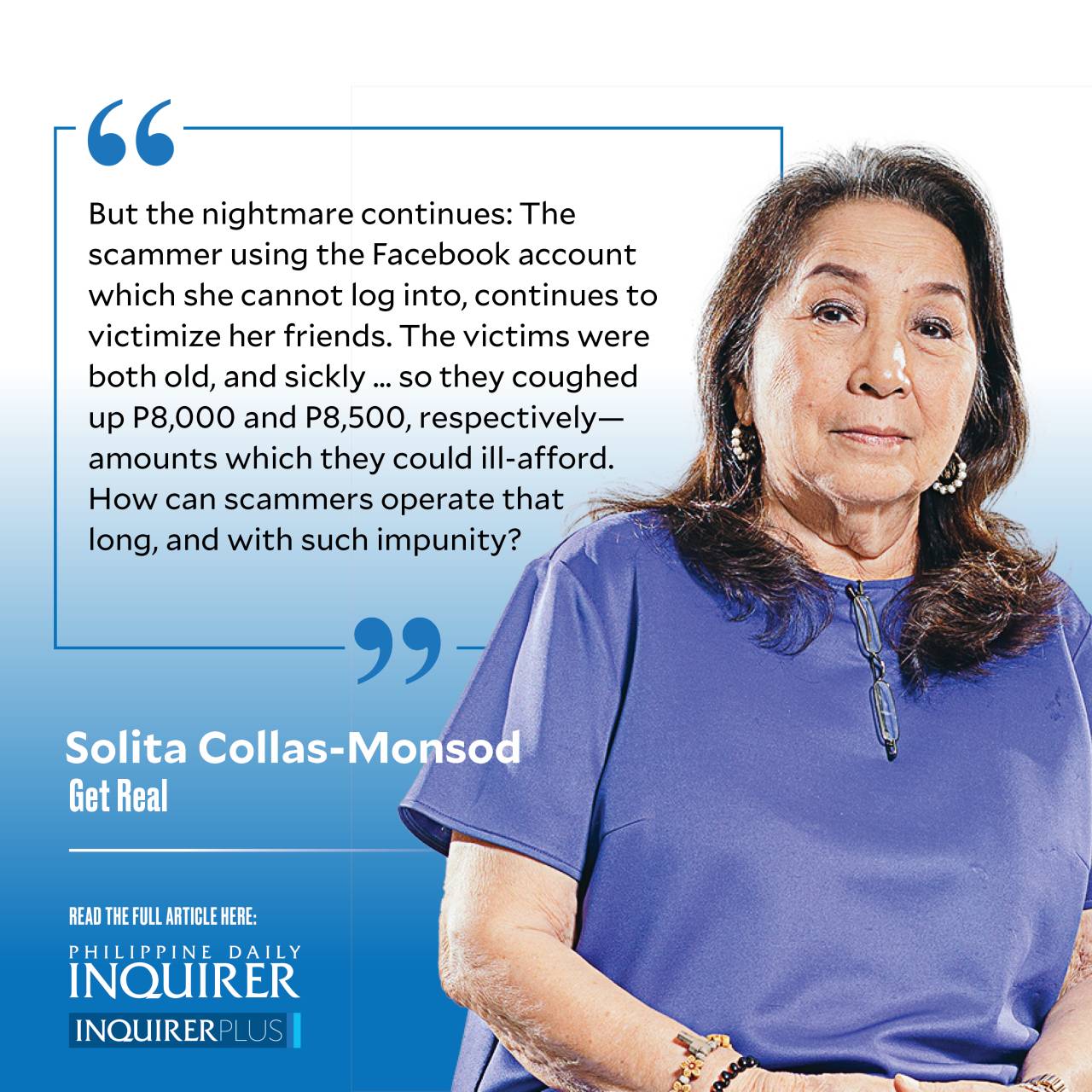 This is a modern-day cautionary tale, except that I don’t only want to warn people, I want the authorities (those who can do something about it) to please get their acts together to effectively catch the criminals.

Eden Bautista is my longtime friend and associate. She is 80 years old (looks like 50), a widow, retired with a government pension (P18,000/mo). She lives alone. Her three children want her to live with any of them, but she is stubborn, and doesn’t want to spend the rest of her days in a rocking chair. She feels she has much more to give her community and her country and does so by doing lots of volunteer work—with the UP Community Chest, as a barangay “lupon,” in her church (although the last, she has not done since the pandemic). She lives a very active and fulfilling life. Definitely not a lonely one.

That life was upended last Sept. 28.

She and her youngest son VJ were having their usual morning exchange of texts, with jokes and endearments. He told her he had a very busy day ahead, with loads of papers to sign, interviews to conduct, meetings to attend. They then signed off.

An hour later, she saw on Messenger chat a message from him that he had finished the papers, and that he was about to attend his first meeting. Then he asked her a favor—he was short on cash at the moment, and he needed to pay P25,000 to a friend who had lent him the money for house repairs. His friend needed the money back ASAP.

Like all good mothers, she stepped up to bat, but she didn’t know anything about GCash processes. He texted her not to worry. Just go to her bank (PNB in the UP campus) and they would help her. He would send the name and the cell phone number of his friend—Renzo Rob Saligumba, 0945-301-8267.

So she did, and it went smoothly. She went back to her office (volunteer work), texted him, and sent the GCash confirmation. There was no reply from him, but she didn’t worry—after all, he said he would be pretty busy.

It was at their usual evening call that she found out that she had been scammed. Her son VJ told her that he had not chatted on Messenger, he would never borrow money from his mom, Saligumba is not his friend. Her defense was that she thought that the Messenger chat was private, and that she really thought that she was chatting with her son, what with the endearments and jokes and all.

At this juncture, let me say that Eden is not an easy mark by any means. The scammer must have been surveilling her and her chats with her son for a long enough time to be that credible. How could that have happened? Isn’t Facebook partly responsible?

But back to Eden’s living nightmare. At the advice of her son, the first thing she did the next morning (Sept. 29) was to change her Facebook account password (her home has no Wi-Fi or internet, so she had to wait), only to find it was already logged out (I think that means that the scammer/s had gotten control of her account).

She then reported the case via email to the GCash customer service. They apparently replied to send them a copy of the confirmation, which she did. That was the last she heard from GCash. So at this point, I ask—that confirmation includes the name of the recipient, Renzo Rob S, his mobile number, a reference number: Ref. No. 1002 280 958805, and the date and time of the transaction—so why could not the GCash people help her? Why the total silence up to now? I’d really like to know, Reader.

Eden was faced with a choice: to report to the police to try to get her P25,000 back or to stay at home because of COVID. She chose health over wealth. She gave up Facebook, and did not use her cell phone until 18 days later, when VJ gave her a new cell phone.

But the nightmare continues: The scammer using the Facebook account which she cannot log into, continues to victimize her friends. The latest of which occurred late last month and early this month. The victims were both old, and sickly, and were convinced that Eden was in dire need, so they coughed up P8,000 and P8,500, respectively—amounts which they could ill-afford.

So Eden finally went to the National Bureau of Investigation, and to the QC Anti-Cybercrime Team of the Philippine National Police. She has no illusion that her P25,000 will be returned, but she wants to spare her friends. How can scammers operate that long, and with such impunity?