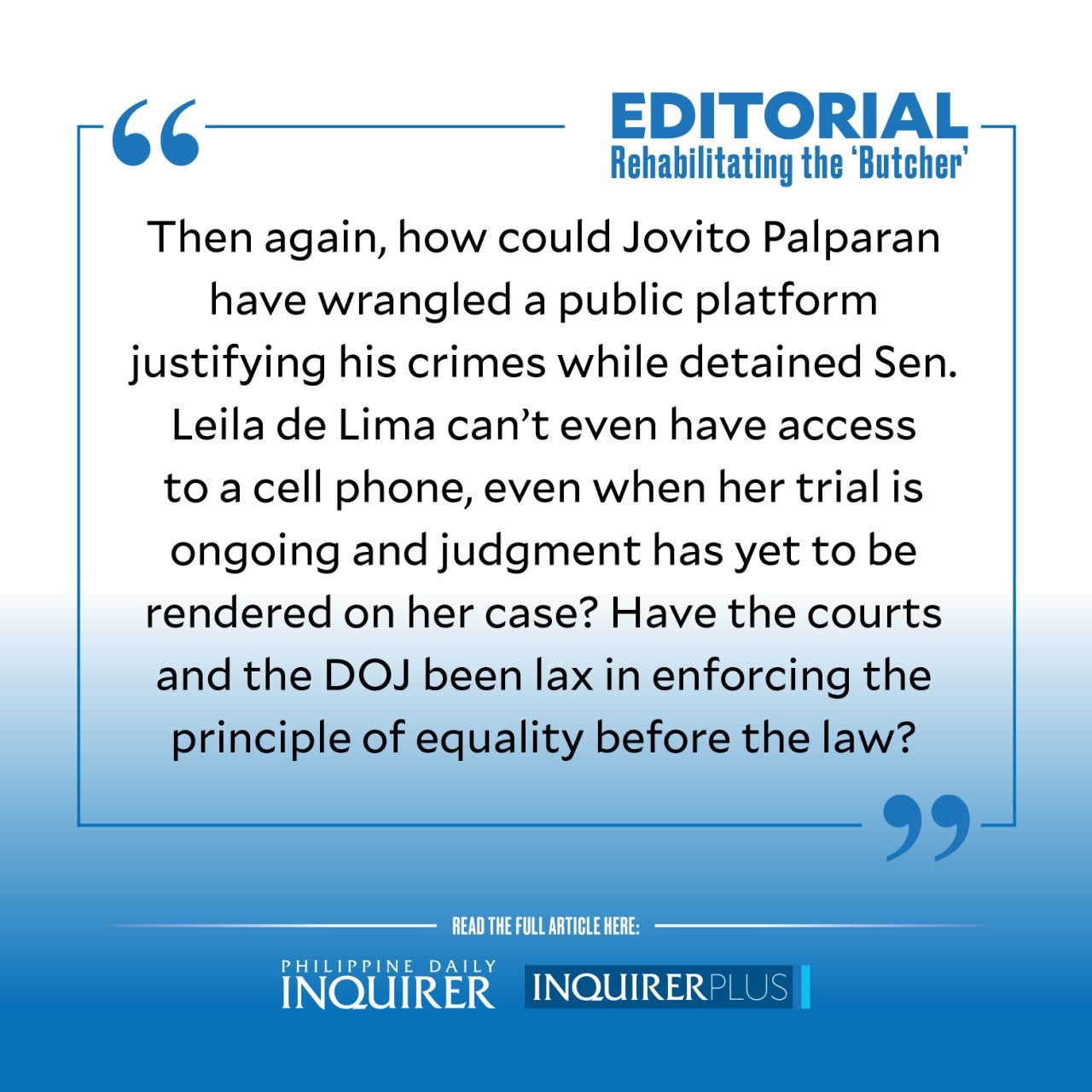 He was described by activists as “The Butcher” during the Arroyo administration for the trail of blood that followed his every anti-insurgency assignment. In 2018, after three years in hiding, retired Army Maj. Gen. Jovito Palparan was finally tried and sentenced to life imprisonment for the 2006 abduction and serious illegal detention of University of the Philippines students Sherlyn Cadapan and Karen Empeño, both of whom remain missing.

So imagine the outrage in some sectors when this convicted felon was featured in a two-hour interview aired on March 30 on SMNI, the Sonshine Media Network International, owned by Apollo Quiboloy, who is on the US Federal Bureau of Investigation’s Most Wanted list for alleged child sex trafficking. The interview by the National Task Force to End Local Communist Armed Conflict (NTF-Elcac) was slammed by the missing students’ kin as “a travesty of justice” and a “cheap shot” meant to rehabilitate Palparan’s reputation.

The Department of Justice (DOJ) has disavowed any knowledge of the controversial interview and said it would probe the Bureau of Corrections (BuCor), which is in charge of national inmates. The BuCor is scheduled to submit its report on the incident on Monday, DOJ Secretary Menardo Guevarra said.

But shouldn’t the DOJ also hold to account Communications Undersecretary Lorraine Badoy, spokesperson of the NTF-Elcac, one of those who interviewed Palparan and who described him as a “victim of trumped-up charges” during the interview? Was this Palace official, already facing a slew of complaints before the Ombudsman and the Commission on Elections for red-tagging critics, impugning the integrity of the courts and the DOJ who were, after all, behind the charges the general was tried and convicted of?

Then again, how could Palparan have wrangled a public platform justifying his crimes while detained Sen. Leila de Lima can’t even have access to a cell phone, even when her trial is ongoing and judgment has yet to be rendered on her case? Have the courts and the DOJ been lax in enforcing the principle of equality before the law?

The NTF-Elcac justified the interview by reasoning out that Palparan was inside the New Bilibid Prison in Muntinlupa City all throughout the event, hence no prior leave or permission was necessary. Everything was “in accordance with prevailing rules, legal precepts, and jurisprudence,” its statement added.

While the interview may have been allowed by the BuCor, it still showed gross insensitivity to the families of the real victims who, 16 years after the crime, have yet to have closure over their loss.

“They gave the convicted Palparan all the freedom to speak to the public. How about our daughters, did he give them a chance to speak and defend themselves? No! They remain missing to this day … while Palparan is alive and well,” Concepcion Empeño, mother of Karen, lamented.

The National Union of Peoples’ Lawyers (NUPL) similarly decried the interview: How could this criminal serving life for depriving people of their basic human rights be allowed to give media interviews at the behest of government officials? asked NUPL president Edre Olalia. “This is not only thumbing one’s nose at our justice and penal systems but [also mocking] equal protection of the law and may be laying the predicate to make [Palparan] walk soon,” he added.

In a letter to BuCor Director General Gerald Bantag, the NUPL questioned the alleged special treatment accorded the convict. Shouldn’t he be transferred to the maximum security compound, instead of him staying at the minimum security facility, which is the holding area for prisoners with light sentences or those who are about to be released? the lawyers’ group asked. It also noted that the request to interview Palparan should have been denied since he still has a pending criminal case before a Bulacan court for the kidnapping of brothers Raymond and Reynaldo Manalo.

The unauthorized interview has implications as well on the seemingly unfettered powers of the NTF-Elcac whose red-tagging spree has resulted in warrantless arrests and suspicious deaths, including those of nine activists in that March 7, 2021 Bloody Sunday raid. Most of the cases filed from those arrests have been dismissed by the courts due to procedural lapses, the latest being that of Dr. Natividad Castro. Despite the conduct of officers of the law in Castro’s case, which the court described as “repugnant,” and the police’s determination to still pursue her arrest, the justice department has yet to denounce what appears to be a habitual disrespect for court proceedings.

The DOJ should be reminded that the International Criminal Court has only paused—on the request of the Philippine government—its investigation into President Duterte’s “crimes against humanity” in connection with his war on drugs. To counter that charge, the agency must exert utmost efforts to demonstrate that the country’s criminal justice system is functioning well in accordance with the spirit of the law. That improper Palparan interview should be a good place to start.