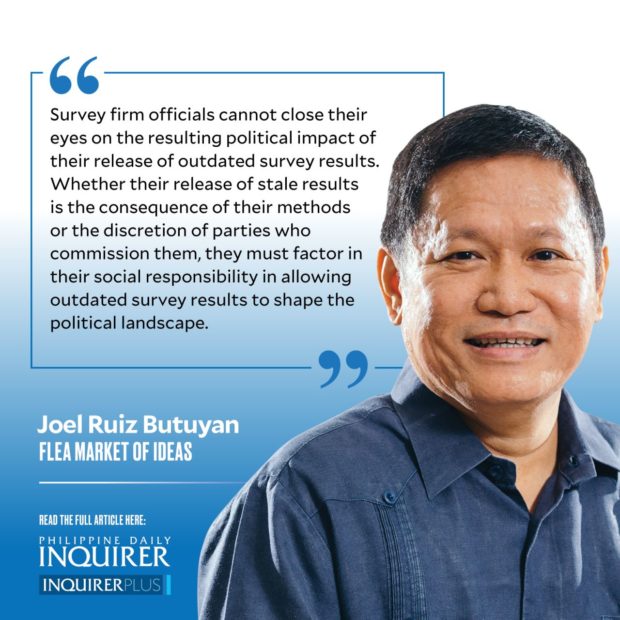 Because of the two to three weeks delay in the release of the survey results, both survey firms were widely criticized. Within those weeks of delay, so many events happened that made people feel the survey results were “panis na” (already stale) at the time of their release. Questions were also raised on the timing of the release, because they were circulated just after a succession of huge rallies for Robredo. This has made a lot of people suspect that the releases of the results were weaponized to dampen a surge favoring Robredo and prevent a bandwagon from developing in her favor.

In the Pulse Asia survey results made public yesterday, for example, Robredo showed a 9-percent surge. But that 9-percent surge was obtained by her more than a half month ago. What’s the real figure on a date that’s closer to the present?

There’s always talk that while election surveys are scientifically done by the survey firms, they’re not totally free of outside manipulation. There’s buzz that, days before the survey, the identities of the barangays to be surveyed get leaked to interested politicians, perhaps without the knowledge of the survey firm officials. The politicians, then, do massive postering, flyers distribution, and house-to-house campaign in the named barangays. When the surveys are conducted, the minds of the targeted barangay people have been saturated with visuals and information favoring certain candidates.

Credible political observers, however, vouch for the integrity of the two survey firms, and the scientific methods they employ. And there is little reliable reason to doubt that the results they obtain truthfully reflect the answers provided by the surveyed voters.

However, survey firm officials are mistaken if they think that they’re merely passive actors who measure voters’ choices. By making election surveys, they position themselves as key players in the political field. This is because survey results produce politically earth-shaking consequences: (1) they generate (or dampen) a bandwagon effect among voters; (2) they drive businessmen to open their wallets and donate tens of millions and even hundreds of millions to the frontrunner with payback expectations when the candidate wins, and; (3) they sway the choice of allegiance of influential politicians.

Survey results can boost a frontrunner’s momentum, stop or slow down an evolving surge for the second runner-up, and stack more hurdles for the other candidates to climb.

Survey firm officials, therefore, cannot just produce a scientific output, but allow the timing and use of their outputs done in unscientific ways. They remove themselves from the ambit of the scientific when they allow the release of outdated survey results, knowing that such stale results will tinker with the political landscape.

Outdated survey results mislead voters. They don’t amount to fake news, but they mimic the form and substance of false news.