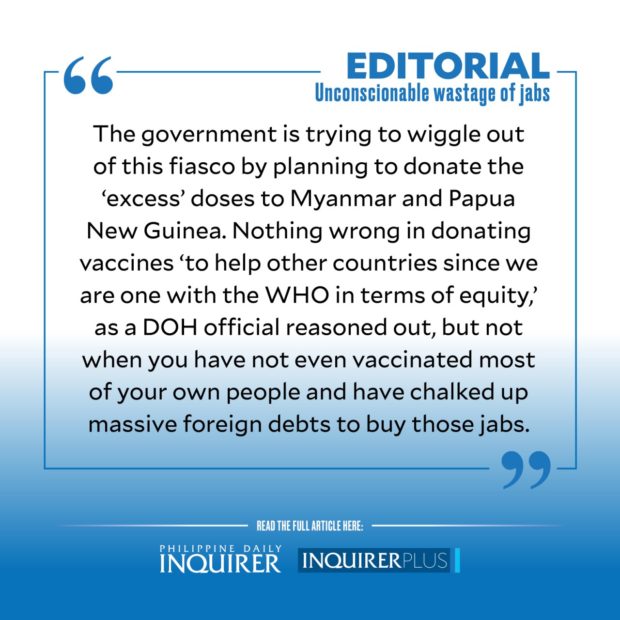 The Duterte administration is embarking on a “last minute” program to encourage — possibly even force — more Filipinos to get vaccinated against COVID-19, given the bleak prospect that some 27 million doses “could end up in the garbage,” thus wasting taxpayer money and increasing the risk of another surge in cases that the Philippines can ill-afford.

President Duterte said in his prerecorded public address this week that the government may have to go “house to house” to administer the vaccines, while Interior Undersecretary Epimaco Densing III said the government was considering putting an expiration date on COVID-19 vaccination cards to force them to get boosted.

Health Secretary Francisco Duque III, meanwhile, expressed hope that Congress would have the “political will” to make vaccination mandatory, appealed to presidential candidates to use their rallies to convince people to get their shots, and even floated the idea of requiring booster shots to take public transportation or enter certain establishments given the emergence of new and more contagious COVID-19 variants.

“I hope we won’t wait for another surge before we get vaccinated,” Duque said.

That the government even had to wait for the last possible minute to come up with all sorts of uncoordinated schemes to restart the stalled vaccination drive provides basis for Senate Minority Leader Franklin M. Drilon to charge the Department of Health (DOH) and the Inter-Agency Task Force for the Management of Emerging Infectious Diseases (IATF) of still mismanaging the public response to the COVID-19 pandemic even after more than two years.

“Unconscionable” was how Drilon described the possibility of the vaccines ending up in the trash, taking to task the DOH and the IATF for their “callous disregard for the taxpayers,” who may see some P13.5 billion of their hard-earned money go down the drain if the 27 million doses are not administered over the next three months.

“I’d like to remind the DOH and the IATF that it is Juan dela Cruz who will pay for these vaccines,” said Drilon, who underscored the fact that the purchase of millions of COVID-19 vaccines had raised the country’s debt stock from P9 trillion pre-pandemic to a record-high P12.09 trillion as of February 2022.

It was Joey Concepcion, presidential adviser for entrepreneurship and Go Negosyo founder, who earlier sounded the alarm over the expiring vaccines, thus his urgent call for the government to step up efforts to get more Filipinos to get their shots, particularly boosters given the alarmingly low takeup in the country.

The latest DOH data showed that 66.2 million Filipinos had already been fully vaccinated, but only 12.2 million out of the 46.47 million, who were eligible to get their booster shots to jack up their immunity against the COVID-19 virus, actually got them as of April 4, for a takeup of just 26.25 percent.

Given that the efficacy of the primary doses wanes in four to six months, the low booster takeup makes the majority of the population vulnerable to the new COVID-19 mutations such as XE, a combination of the two Omicron lines that was first detected in the United Kingdom.

Initial findings of the World Health Organization (WHO) show that XE, already detected in Thailand, is 10 times more transmissible than the BA.2 “stealth” subvariant that continues to wreak havoc across the globe.

Thus the urgent call by both Drilon and Concepcion for the government to not be complacent despite the revert to the lowest COVID-19 alert level and pull out all the stops to accelerate the vaccination drive, especially with increased mobility and frequent mass gatherings amid the spirited campaign season. Health experts see a surge in infections after the May 9 elections, which should have prompted the government to be more energetic in its vaccination drive. After all, millions have yet to receive their primary shots and over 70 percent have yet to get their boosters.

Now, the government is trying to wiggle out of this fiasco by planning to donate the “excess” doses to Myanmar and Papua New Guinea. Nothing wrong in donating vaccines “to help other countries since we are one with the WHO in terms of equity,” as a DOH official reasoned out, but not when you have not even vaccinated most of your own people and have chalked up massive foreign debts to buy those jabs.

“The coronavirus is still within our midst. We must ramp up our vaccination efforts,” Drilon said.

Concepcion echoed the appeal, lamenting how Filipinos have become complacent just because the alert level is at its lowest, not realizing that there is “real danger” in the second half of the year due to the perfect storm of waning immunity and the new COVID-19 variants.

“Unless we finish all the vaccines in stock and booster everybody that needs it, we risk going back to square one by year end,” he said.

Going through another wave of infections and lockdowns will be a big burden weary Filipino taxpayers cannot and should not be forced to take on just because of the government’s continuing ineptitude and failure to handle the most basic pandemic response.