Her future, our future 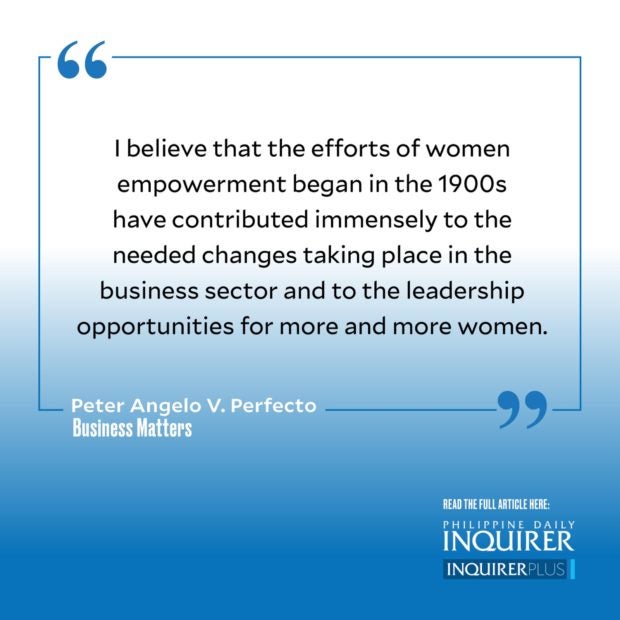 The celebration of women’s day traces its roots back to the early 1900s, subsequently evolving into an annual international day of action every 8th of March to celebrate women’s achievements, raise awareness about and lobby for women’s equality, and mobilize resources for projects and programs for women.

To amplify the impact of the annual celebration, month-long themed global campaigns became the norm from the mid-1990s. “Break the Bias” is this year’s theme as a clarion call for more action to level the playing field and not just recognize that bias exists. Organizations like Oxfam Pilipinas have partnered with other groups like Philippine Educational Theater Association to do their share with events like “Babae ang Simula, Babae ang Bukas” arts festival.

This growing call for gender equality and parity has resonated across national and global business communities with studies, surveys, and rankings helping push for a better understanding of and encouraging action on continuing challenges for women in the workplace and women in leadership roles. Grant Thornton International, for example, does its annual Women in Business report that has tracked female representation in senior leadership over 18 years and highlighted what needs to be done, aiming to act as an agent for change in the drive to increase gender parity and inclusion in business.

The good news for the Philippines is that the country has ranked third in the list of countries which recorded the highest number of women leaders in mid-size firms in both the 2021 and 2022 reports. In the 2022 report’s conclusion, Kim Schmidt, global leader-leadership, people and culture at Grant Thornton International said, “Leaders, men and women, have passionately embraced the idea that diversity and inclusion, with a starting focus on gender, is critical for organisational success, whether it’s around attracting talent, innovation, or performance. Those leaders will drive the momentum.” By achieving top 3 for two years now, Philippine business leaders are apparently driving the momentum for the needed change for women.

Washington-based nonprofit Corporate Women Directors International reported last October 2021 that four Philippine companies made it to the top 10 companies in the world led by women CEOs and with the highest percentage of women executive officers: the SSI Group, Victorias Milling Co., the Filinvest Group, and Robinsons Retail Holdings Inc., led by Zenaida Tantoco, Minnie Chua, Mercedes Gotianun, and Robina Gokongwei, respectively. Yet another recognition of how corporate Philippines is slowly but surely embracing the calls of the global day of action for women.

In its 8th annual list of the World’s 50 Greatest Leaders, Fortune Magazine highlighted two key traits that characterize successful leaders. The first is that they confront new realities quickly and fully and the second is that they take action, doing things no one else is doing or has done, with no assurance they will succeed. A woman, New Zealand Prime Minister Jacinda Ardern, topped the list for her government’s swift and effective action to stop COVID-19. The leadership of Prime Minister Ardern and her performance in the global pandemic is the stuff of legend.

I believe that the efforts of women empowerment began in the 1900s have contributed immensely to the needed changes taking place in the business sector and to the leadership opportunities for more and more women. Action on both national and international levels to break the bias must be sustained. While women leaders have succeeded in politics and public service in our country, the past six years have seen us backpedaling with totally biased and often malicious attacks aimed at prominent women leaders like Maria Ressa, Sen. Leila de Lima, Patreng Non, and our very own Vice President Leni Robredo. I am extremely appalled that the narrative that women are soft and weak making them incapable to lead has gained traction even among women in the last six years. We must put a stop to this and resume our journey towards gender equality and parity.

I propose that the best way to do this is to reserve the 17th term in Malacañang for a woman—one who has exhibited the traits of a great leader, confronting new realities quickly and fully, and taking action by doing things no one else is doing or has done. Only one name comes to mind.

Business Matters is a project of Makati Business Club.