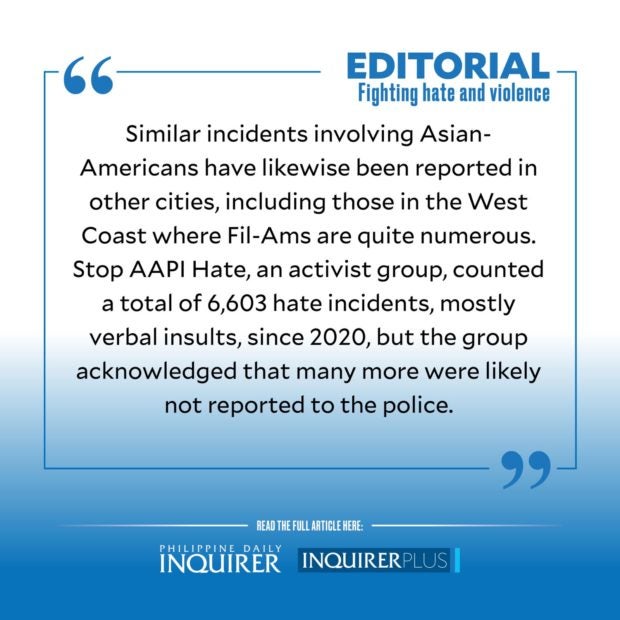 It took just one careless remark, repeated time and again, from former US president Donald Trump to set off the prairie fire of hate against Asian-Americans, including Fil-Ams.

Asian-American activists say that Trump’s repeated references to COVID-19 as the “China virus” at the start of the pandemic in 2020 was all the provocation needed by the emotionally and mentally unbalanced, the ignorant and suggestible, or just plain prejudiced, to unleash their anger and resentment against Asians or people who look Asian.

Lately, a string of attacks on elderly Filipino-Americans, mostly women, has been unleashed by assailants who would push, kick, slap, punch, and even spit on the victims, all the while yelling at them to “go back where you belong.”

The latest of these attacks was perpetrated against a 67-year-old woman of Ilocano descent. Video footage shows that as she was entering her apartment building in Yonkers, New York, a stranger attacked her from behind, with reports saying that she was “punched 125 times, stomped on seven more times and spat on.” More alarmingly, she “sustained fractures and lacerations to the head and face as well as bleeding in the brain.” The good news is that she is currently in stable condition.

But the violence inflicted on her has only fueled fears of further attacks on other Asian-Americans. Philippine New York Consul General Elmer Cato cited a total of 26 incidents of unprovoked attacks against Fil-Am immigrants in New York since 2021. New York police revealed last September that anti-Asian hate crimes have risen by an astonishing 1,900 percent in New York City alone. Similar incidents involving Asian-Americans have likewise been reported in other cities, including those in the West Coast where Fil-Ams are quite numerous. Stop AAPI Hate, an activist group, counted a total of 6,603 hate incidents, mostly verbal insults, since 2020, but the group acknowledged that many more were likely not reported to the police.

In response, the New York consulate called on local authorities “to do more to protect the vulnerable,” while the embassy earlier advised Filipinos to exercise utmost caution. Philippine Ambassador Jose Romualdez has likewise called the attention of the US Department of State and other officials on the rising incidence of violence.

To be fair, US officials have expressed concern as well over the wave of violence. Exactly a year ago, another Filipino woman was attacked near Times Square. Security guards in an upscale condominium stood by and later locked the doors even as they watched the 65-year-old Fil-Am woman repeatedly get kicked and stomped on the sidewalk. Then NYC Mayor Bill de Blasio called the attack “absolutely disgusting and outrageous” and urged New Yorkers to intervene when they see assaults. Then New York Gov. Andrew Cuomo described the incident as “horrifying and repugnant,” and ordered the state police to help in the investigation.

In response to the 2021 attack, President Joe Biden announced a slew of initiatives to counter hate crimes, including keeping tabs on such attacks and urging people to report them. Indeed, as many have noted, while bystanders often show concern while the beatings are taking place, only rarely will they intervene or help the victims.

“When I look at the video, the inaction is what’s heartbreaking,” Mon Yuck Yu, a health advocate for immigrants told The New York Times about the 2021 attack. While Chris Kwok, a board member of the Asian American Bar Association of New York, said that “this feels like an emergency happening in real time over weeks. People are in a state of panic. Everybody is on edge.” The number of attacks has long been believed to be underreported, which some attribute to language barriers and distrust of police.

Last year, the New York Police Department said it would begin deploying undercover officers to neighborhoods with large Asian populations, with all unprovoked attacks on members of the Asian-American community “referred for investigation as possible hate crimes.”

These violent incidents definitely trigger anxiety among Filipinos, most of whom have relatives in the US, the promised land for immigrants. While US law enforcers are apparently doing all they can to help keep vulnerable Asians safe, the Philippine government, through the Department of Foreign Affairs, can use diplomatic pressure as well to push for stronger measures from the US. A few come to mind: stronger police visibility, crime hotlines, more stringent implementation of the Good Samaritan law especially in subways, and maybe race sensitivity subjects introduced in elementary school curriculum. Every little bit helps.

As President Biden has declared, racism in their midst has been “an ugly poison that has long plagued (the US).” With more people moving around as the world gets smaller, there’s simply no place for prejudice based on race, origin, and ethnicity.