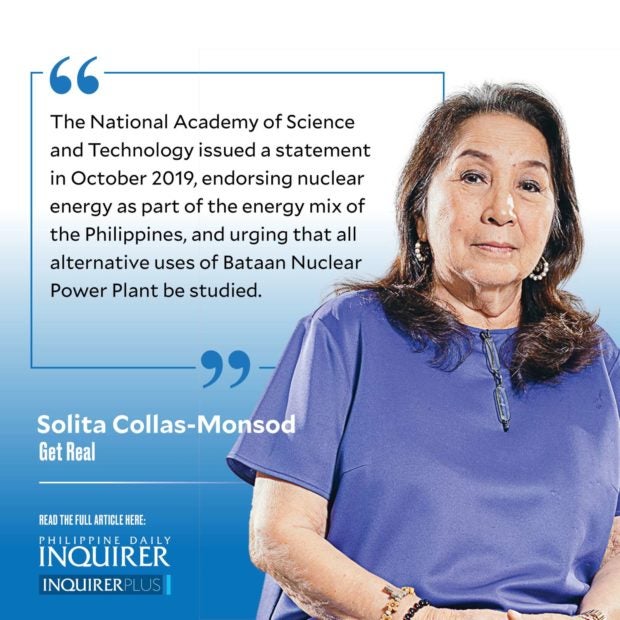 You disagree with me that “we Filipinos do look at the data… before we make decisions.” “Not always,” you say, citing Mr. Duterte’s election. Well, where in that sentence that you quote, do I say “always”? Please don’t put words in my mouth. And BTW, your example may not be the best. Because Filipinos had very little data to go on—Mr. Duterte was a latecomer, and they had no time to study him as closely as the other candidates who were more well-known. Mr. Duterte had the attractiveness of a newcomer and little was known about him, or there was no time to spread the word.

On the other hand, I have examples which tend to make my case: the Filipinos’ distrust of China; their repudiation of Jojo Binay when he ran for president; their election of Leni Robredo as vice president. And, of course, their approval/acceptance of the rehabilitation of the Bataan Nuclear Power Plant or BNPP (79 percent) and their approval (65 percent) of building new nuclear power plants.

It is really not puzzling why they show such an overwhelming openness to this source of energy: They have suffered from crippling electricity brownouts (especially when the BNPP was not operated), and may be undergoing the same thing again. Also from high electricity prices, which has given pause to prospective investors, local and foreign. But of course, you wouldn’t be familiar with the experience, since you live in Illinois, where energy mix includes more than 50 percent nuclear power and so you have access to cheap and reliable electricity rates.

You call my column “pronuclear propaganda” which has “bamboozled not just Filipinos, but so much of the world.” Please point out which statement in my column is not fact-based. You say Watts Bar II had to pass the rigorous safety standards of the US Nuclear Regulatory Commission. You don’t think a rehabilitated BNPP will have to pass safety requirements? My point was simple: Watts Bar II is older than BNPP, was decommissioned earlier than BNPP, and was rehabilitated in 2016. Where’s the propaganda?

Why bring Australia into the picture? It has the most uranium, and doesn’t have a nuclear power plant? Well, it also has enormous amounts of coal (black and brown) and liquefied natural gas, and oil (shale and others). It is a major exporter of coal. More importantly, it has one of the highest per capita emissions of greenhouse gases/CO2 in the world. Experts have been predicting the floods and forest fires it is now experiencing because of climate change. Australia is not exactly a role model.

Let’s talk about the BNPP. Dr. Carlo Arcilla, the head of the Philippine Nuclear Research Institute (PNRI), sent me a letter in reaction to my column. I quote: “I understand that there is a 2012 publication by Lagmay, et al., on the fault existence, but we have also performed three independent methods to determine if there is indeed an active fault beneath the BNPP: 1) Electrical resistivity, 2) Seismic methods, 3) Radon gas testing. These methods, aside from the obvious nonexistence of surficial manifestations beneath the plant, confirm the absence of a fault beneath BNPP. Space limitations prevent me from providing details but we will be publishing our results, and anyone genuinely interested can examine our data.” (emphasis mine).

He ends with “PNRI is also the nuclear regulator, and being its director, we will have to sign the license to operate the nuclear power plant, following the IAEA safety guidelines. I will NEVER sign a license for the plant if there is an active fault beneath it.”

Other fun facts, Kelvin. In a presentation, Arcilla mentions three exact replicas of the BNPP—in South Korea, Brazil, and Slovenia, built around the same time. Around 40 years later, they are apparently doing well. Also, our BNPP, closed down but maintained all these years, suffered no structural damage even with the earthquake in 1991 and Mt. Pinatubo eruption. There are pictures. That must mean something.

But the best is for the last. The National Academy of Science and Technology, of which you mention your colleagues are the only two geologists worthy of membership, issued a statement in October 2019 endorsing nuclear energy as part of the energy mix of the Philippines, and urging that all alternative uses of BNPP be studied. So I ask the same question you asked about Australia: What do they know that you don’t?