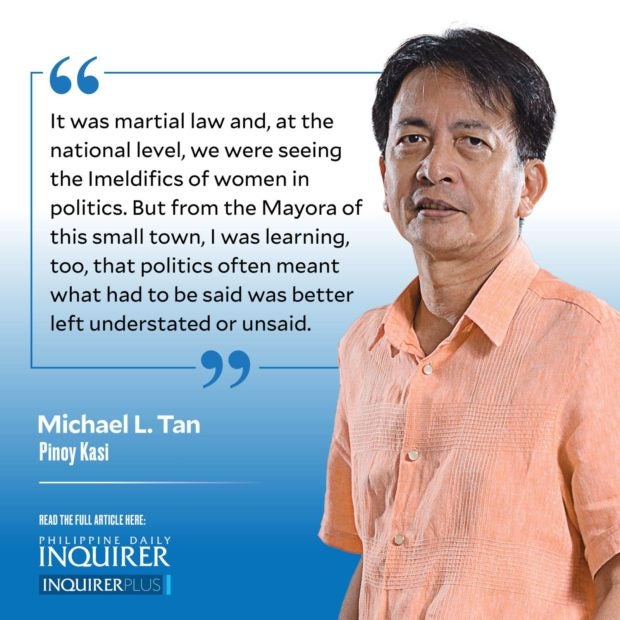 More than 40 summers ago, I was sent off with a volunteer group to one of the most remote areas in the Philippines, so remote that I read about a concrete road to that town just completed last year.

It was an adventure through and through. There was the trip with its many delays because no one, not even the military, seemed to know how to get there. There was the cultural shock to a rural area, with cultural minorities (now called indigenous peoples). The cultural shock too came with discovering that although it seemed so inaccessible, the first sari-sari store we encountered had Coke and cigarettes.

It was an encounter of cultures, the villagers fascinated by the students from Manila, including this exotic, skinny, fair-skinned chinito.

I appealed especially to the many nanays, who for the next month were always trying to fatten me up. I was a vet student at that time and learned that besides the usual “peste” (pestilence diseases) that we were expected to treat, we — the volunteers — were also peste in that the villagers felt they had to feed us special food, which meant canned goods and their own livestock being wiped out.

Particularly solicitous about my welfare was a middle-aged woman who had been among the welcoming party. Ever ebullient, she gave us a rundown of their municipality, at that time a population of only 5,000 but with a long list of problems around livelihood (including the livestock), education, nutrition, health.

Everyone called her “Mayora” and, initially, I thought she was indeed the town mayor until her husband, who was the elected mayor, was introduced. All the time during the welcome, he barely said a word, standing in the background.

The Mayora and I clicked right away, maybe because the first question I had for her was, “Where is the toilet?”

Oh, but she laughed, stretched out her arms to pan a large field in front of us. “That,” she said, “is the toilet.”

One day, trying to make conversation, I asked her for the name of a tree with lush flowers in her backyard.

The Mayora was incredulous but she calmly answered, “Mangga.”

I learned, in due time, that mango trees had flowers, and its young leaves were edible, and that you could also sometimes find on mango trees, among others, eggs of a large ant species, which made a delicious omelet that nearly killed me the one and only time I tried it, breaking out in hives in the middle of the night and wheezing for air. I was having an allergic reaction to this new food.

Fortunately, our student volunteer teams included medical and nursing students. Unfortunately, they didn’t have epinephrine for the breathing, and had to depend on oral antihistamines.

Clearly, I survived, as I did that summer, and the one the following year. The adventure part became less important than learning about the often harsh realities of rural life.

Those two summers taught me, too, why so many wives of mayors are called mayora in the Philippines and how important women are as politicians (as was the mayor of the next town, the widow of the previous mayor) or as women in politics, like this mayora wife of an incumbent.

The Mayora was a simple woman, no college degree, but she was wise as mothers go, more in the tradition of a navigator, a pastora for her constituents, helping them around bureaucracies and patronage systems, around kinship systems and ethnic entanglements and religious groups competing for souls.

She anticipated, she understood, she knew.

Only a few days into our volunteer work, she told me that instead of using the hectare-sized toilet, I should just use the latrine in their outhouse toilet in the backyard. Before I went, she suddenly held my arm and said I might be surprised by what I’d find.

I laughed when I discovered what the surprise was. There was no toilet paper; instead, it was a bunch of KBL propaganda leaflets piled high and unused, KBL being Kilusang Bagong Lipunan, Ferdinand Marcos’ party.

It was martial law and, at the national level, we were seeing the Imeldifics of women in politics. But from the Mayora of this small town, I was learning, too, that politics often meant what had to be said was better left understated or unsaid.