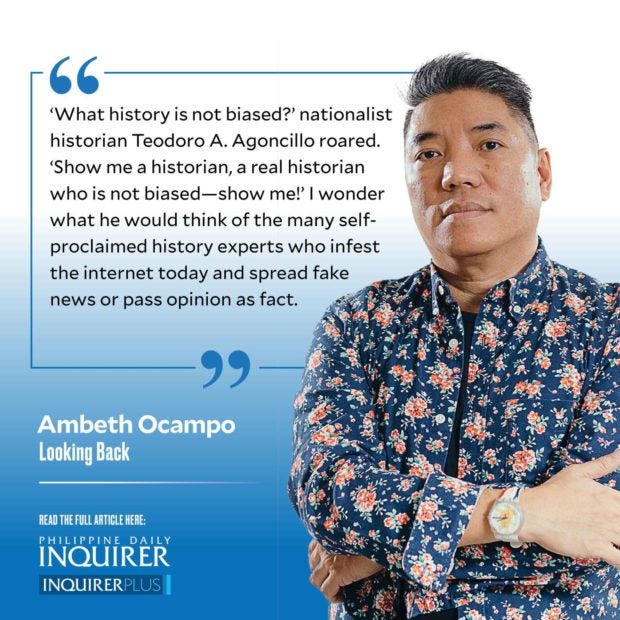 When asked to comment on critics who say I am “bias” (sic), I refer the curious to the PLDT telephone directory. There it is in print, hundreds of pages that provide a simple list of names and phone numbers. I used to treat the phone book as a rare example of an objective primary source except that the arrangement of the data can be argued to be subjective. For example, why is the list alphabetically arranged by surname? Can we arrange by first name? Would it be more logical to arrange the list numerically in ascending or descending order? Can the data be arranged by gender? By profession? Or geographic location? If we can’t be objective and unbiased in a phone book, what more about history?

Bias in history is old as history itself. I remember the late nationalist historian Teodoro A. Agoncillo who was Red-tagged, as a communist, for his landmark book: “The Revolt of the Masses: The Story of Bonifacio and the Katipunan” (1956). “What history is not biased?” he roared one day, adding with a hearty laugh: “Show me a historian, a real historian who is not biased—show me!” I wonder what he would think of the many self-proclaimed history experts who infest the internet today and spread fake news or pass opinion as fact.

My conversations with Agoncillo were published under the title “Talking History” (1995) that, in retrospect, could mean either Agoncillo talking about history or Agoncillo literally being Philippine History talking. Explaining bias to me in 1984, he said:

“When you say, for example that [Ferdinand] Marcos [Sr.] is so and so then you are biased. You have to interpret. In history pag sinabing objective ka, you are nothing! You are nothing, absolutely nothing! Absolute zero! (Laughs) Even a calendar chooses! (Laughs) Humanap ka ng kalendaryo, makikita mo hindi lahat ay nakalagay sa kalendaryo (laughs).

“The people who criticize me do not really know history. They are ignorant of what history is, because the very fact that the student of history chooses what to include and what not to include in his work, is proof that history is never objective. (Laughs). When you say, for example, that Mrs. [Imelda] Marcos is a beautiful woman, you are not being objective, because [that] beauty of Mrs. Marcos doesn’t say that she is beautiful. It is you! Ikaw ang nagsasabing maganda si Mrs. Marcos. In other words, you are already intruding yourself [into the narrative].

“The moment the student of history gives what is called a value judgment, and in history you always do that, wala na! Saan nandoon ang objectivity mo? It is important in history to be impartial! Which is different.”

I met Agoncillo in his twilight. He met me at the dawn of my career. I often think his life and work inspired me to follow the path of Clio. More so when he repeated to me, words he delivered in 1977 upon his retirement from UP, an act he described jokingly as “stepping out from darkness into the sunlight.”

He said: “Those who would work in the fields, and others like me, who tried to explore, should be unafraid, like the true explorers, and must tell things whatever ends they may bring, no matter who gets hurt. I once told my class on the Philippine Revolution, and I should like to repeat it now, that he who is afraid to make enemies cannot be expected to tell the truth (laughs).

“… the very little I have done has not even scratched the surface of the vast and deep reservoir which is our history and culture. It remains for those I left behind to continue where people like me left off: experimenting, modifying, enriching, correcting, and enlarging as they go along. There is no perfectibility, nor completeness in scholarship, and the fools that we mortals be, as Shakespeare once said, can only try our best to make the best of a bad situation … I do not want to be narcissistic or to be falsely modest, but I like to think that my academic residence in this institute of learning has given knowledgeable outsiders sufficient cause to suspect that there is such a thing as a Department of History in the University of the Philippines (laughs).”

Modesty may not be one of Agoncillo’s virtues, but even his critics agree that he cast a long shadow in Philippine history that, rightly or wrongly, formed the way in which we know and understand the Philippine Revolution and the short-lived first Republic. I miss him dearly.