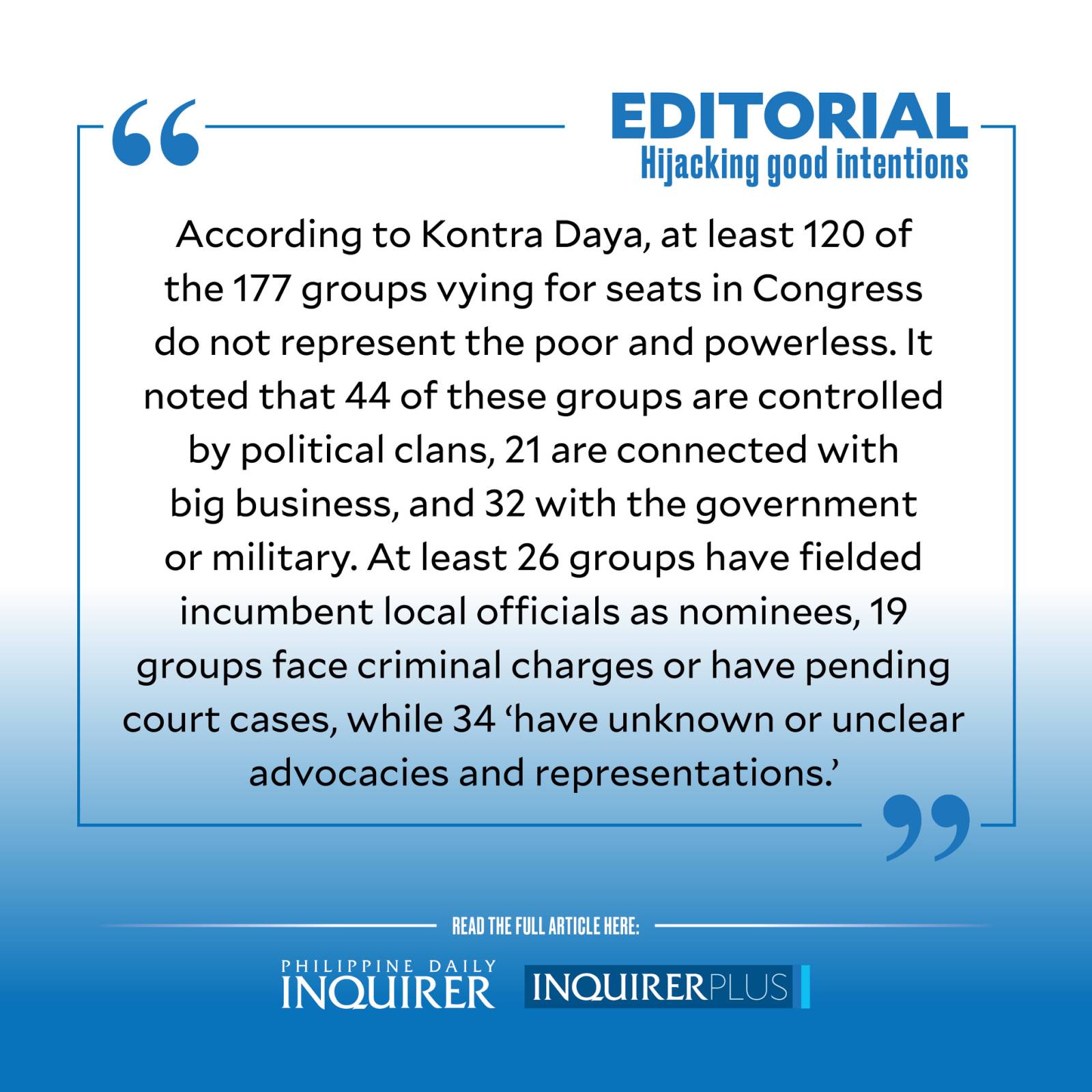 The party list system perhaps best illustrates that old saw about the road to hell being paved with good intentions.

When the framers of the 1987 Constitution provided for party list representation, the noble goal was to give marginalized and underrepresented sectors a voice in Congress, specifically those from the “labor, peasant, urban poor, indigenous cultural communities, women, youth, and such other sectors as may be provided by law, except the religious sector.”

And yet today, according to election watchdog Kontra Daya, some 70 percent of party list groups have been hijacked by politicians and business interests, effectively shutting out marginalized sectors for whom the system was created.

Which explains how, in an earlier Congress, presidential son Mikey Arroyo represented security guards, while Claudine Bautista-Lim, who was bashed online for her lavish wedding in Balesin island, represented PUV drivers.

Such anomalous scenarios may be traced to the vague wording in the Charter’s provision. Except for saying that the party list shall constitute 20 percent of the total membership of the House of Representatives, and that for three consecutive terms, one-half of the seats shall be filled by the marginalized sectors, it left everything else to Congress.

Accordingly, Congress passed the Party-List System Act (Republic Act No. 7941) in 1995 which required groups to get at least 2 percent of the total votes cast for the party list to qualify for a House seat, up to a maximum of three seats.

But a landmark 2013 ruling by the Supreme Court shook up the system when it held that regional and/or sectoral candidates need not represent the “marginalized or underrepresented,” as long as their members advocate common ideologies or principles “regardless of their economic status as citizens.” The high court also voided the 2-percent parameter.

With the floodgates thrown wide open, we now have 61 party list representatives out of 304 members of Congress, most of them from moneyed clans and dynasts, who find in the party list system a cheaper and easier backdoor to entrench themselves and protect their economic and political interests.

For the 19th Congress, 63 seats have been reserved for party list representatives out of 316 total seats.

According to Kontra Daya, at least 120 of the 177 groups vying for seats in Congress do not represent the poor and powerless. It noted that 44 of these groups are controlled by political clans, 21 are connected with big business, and 32 with the government or military. At least 26 groups have fielded incumbent local officials as nominees, 19 groups face criminal charges or have pending court cases, while 34 “have unknown or unclear advocacies and representations.”

Could a more transparent, more rigorous, and standardized screening by the Commission on Elections (Comelec) have prevented this?

Questions have been raised on the poll body’s approval of such aberrant party list bids by groups like Mothers for Change, whose nominees Overseas Workers Welfare Administration deputy administrator Mocha Uson and former spokesperson of the National Task Force to End Local Communist Armed Conflict (NTF-Elcac) Michele Gumabao were criticized online as not even being mothers. Government-affiliated groups have been allowed to run as well, among them Abante Sambayanan, which seeks to represent former communist rebels in the legislature and whose nominee includes NTF-Elcac informant Jeffrey “Ka Eric” Celiz.

Of a total of 270 party list groups applying to participate in the May 9 elections, Comelec rejected 93 and accredited 165. It was however forced to include in the official list of candidates 12 rejected groups that had secured a restraining order from the Supreme Court.

Among those rejected was Malasakit Movement, the party list group led by former Metropolitan Manila Development Authority spokesperson Celine Pialago, which was “unable to prove they were representing marginalized and underrepresented sectors,” Comelec spokesperson James Jimenez said. But the poll body quickly forfeited the approbation it earned with this laudable move when it also booted out, for “some defects,” the party list group Nurses United, which represents legitimate health workers.

Asked Kontra Daya in its statement: “Comelec should explain why it continues to allow dubious groups to hijack the party list system, depriving marginalized groups [of] a voice at the House of Representatives.”

It’s a question we should all be asking the Comelec, while also urging the next Congress to pass legislation that will remedy the flaws of this failed experiment. Voters should meanwhile look closely into the background and record of the party list nominees, and the party itself, to ascertain how it has so far advanced the cause of the sector it supposedly represents. Charlatans who derail the democratic process by playing the party list system certainly have no place in our ballots.