Rizal on the block 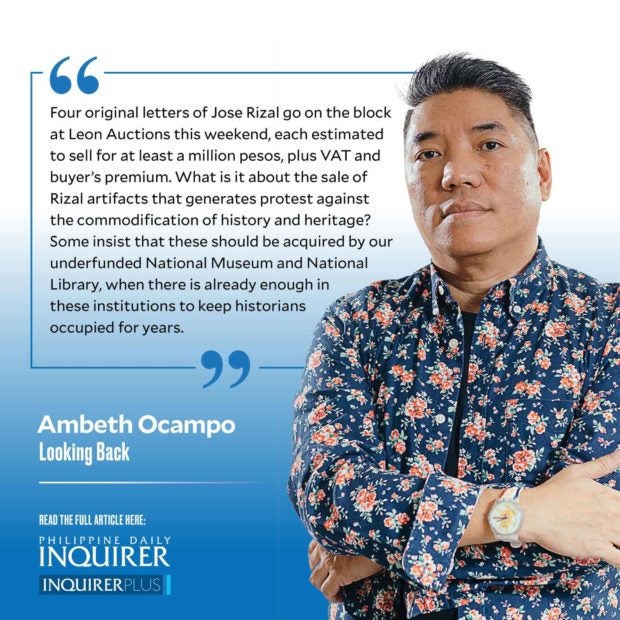 Four original letters of Jose Rizal go on the block at Leon Auctions this weekend, each estimated to sell for at least a million pesos, plus VAT and buyer’s premium. What is it about the sale of Rizal artifacts that generates protest against the commodification of history and heritage? Some insist that these should be acquired by our underfunded National Museum and National Library, when there is already enough in these institutions to keep historians occupied for years. Aside from the National Library, Rizal originals can be consulted in the Lopez Museum, the Ateneo, and the Newberry Library in Chicago. That is, if you actually need to see originals when almost all of Rizal’s writings have been transcribed, translated, and published by the 1961 Jose Rizal National Centennial Commission. These four letters emerged from hiding due to current auction prices, they have been scanned and are now available online which is good for historians who otherwise have no access. Besides, using a scan is better than handling a fragile original.

The letters to Maria are tender and personal, all written from exile, the first from Hong Kong, the rest from Dapitan. Reunited with his father and his elder brother Paciano in Hong Kong, Rizal reports: “Father has gained weight, his cheeks are turning rosy, he walks around a lot and is very happy here.” The eviction of Rizal’s family and friends from Calamba following an agrarian dispute with the Dominicans prompted him to explore settling the displaced in British North Borneo. In all these troubles Rizal consoles a sister who endured much: “Magtiistiis na muna sila, at darating din ang ating araw.” (Be patient for now, our day will come). In another, he wrote: “Bear with hardship on earth in the hope that in another lifetime you will attain only happiness and delight. Our life is short and hardship is easily passed. Bear all for the sake of the Rizal name and your children.”

Four years of exile in Dapitan would have destroyed a weaker man who would wallow in self-pity or depression. Rizal saw opportunity in crisis. He set up a clinic, a school, a store, designed a water system, composed poetry, started compiling a Tagalog English dictionary, learned Cebuano, did archeological excavation etc. In one letter, he reminded his nephew, Mauricio “Moris” Cruz to speak and write English so he won’t forget. He sent a prescription for buni (ringworm) as “pomada antiherpatica” on the affected area. He reminds Maria to collect debts owed by “Enciang” and “Magdalena wife of Sitas.” He gratefully receives a package of tea, chocolates, “matamis” (native sweets), and cigarettes. So Rizal smoked more than hashish—for therapeutic, not recreational purpose.

Translated from the original Spanish, Rizal’s unpublished letter of June 3, 1896 to his mother reads:

“My very dearest mother: I received your affectionate letter and thank you very much for the interest you take in me.

“Miss Bracken is going to Manila for her health carrying: three jars of paho for you and your friends like the aunties and Señor Gino, half a demijohn of lard, another of coconut oil, various trays and 25 pesos for you and Tatay. I can’t send more money on this mail since I’ve had many expenses but in the next mail I will send a bit more.

“Miss Bracken will probably stay in the home of Sra Sisa [Narcisa Rizal] who has invited her some months now in each mail. She is very thankful for your invitation.

“I got sick again, but I was instantly cured because I now know more about the kind of fever that runs here. Many die. The governor was sick twice, the priest too but he was cared and attended to. At home Mate, Ferne, and Huy got sick.

“With many memories to all, my kisses to your hand and Tatay’s. Your son, Jose Rizal.

“The papaya bore much fruit. There are times when for each chico we eat a papaya for dessert. You will receive from Miss Bracken a few gold nuggets as my gift.”

People may disagree with my pragmatism, but I do believe that historians need the content rather than ownership of the originals. These may go from one private collection to another but they will be cared for and in my experience made accessible to scholars who need to consult originals rather than scans.