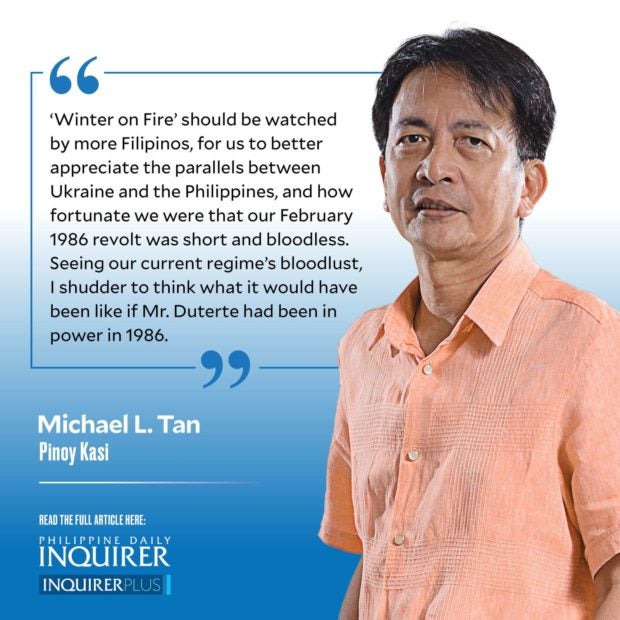 What sad news to read on the anniversary of Edsa: “Lumad teacher Chad Booc and 4 others slain in Davao Oro—military.”

The military claims Chad and his companions were killed in an encounter but SOS (Save our Schools) Network, an advocacy group for “lumad” (Mindanao indigenous peoples) groups says there was no encounter and that this was the latest government salvaging or extrajudicial execution.

Chad’s FB post talked about his struggle to decide what to do after graduation. The norm was to go for a corporate high-paying job, but he chose to go to the CS, the countryside, as a volunteer teacher with lumad schools, whose plight he had learned from delegations of indigenous communities that had visited UP to publicize militarization in their area, the closing down of schools, and leaders being harassed, imprisoned, assassinated.

I never met Chad when he was in UP, hearing about him the first time when I visited one of the lumad schools and was told there was, in another school, a UP Diliman graduate of computer science working as a volunteer teacher.

I finally met him at a Quezon City police station. I had been called about several UP Diliman students being arrested after they had conducted a flash rally at a congressional hearing on martial law in Mindanao. Chad was one of the arrested students, totally unassuming, ever so cheerful.

In 2021, he was among the “Bakwit 11,” mainly teachers, arrested in Cebu supposedly for “child trafficking,” a charge the military has tried several times in their Red-tagging, claiming that lumad students had been abducted. A court threw out the charges as baseless and the “Bakwit 11” were released.

We would run into each other, always with time only for quick conversations. Like a parent, I would worry, wishing he had taken safer alternatives than working in the CS with its grave risks.

Monday night I thought I’d “tune out” with Netflix and wondered about a documentary “Winter on Fire: Ukraine’s Fight for Freedom.” Did I really want to watch this with my depression? The trailer convinced me I needed to.

The “winter of fire” started in November with student demonstrations against an autocratic president, Viktor Yanukovych, who was trying to draw Ukraine back to the Russian orbit. Ukraine had broken away from the Union of Soviet Socialist Republics in 1991. It was youthful idealism from a generation that had come of age in a democratic society.

Crowds grew, bringing in people of all ages, from different walks of life, all through the winter into 2014 despite several violent dispersals by military and paramilitary forces. The documentary is riveting, showing how people organized to provide food and medical services, and trained to survive in rallies. Later, too, the heartbreaking funerals.

The civil unrest became a Revolution of Dignity culminating on Feb. 23, 2014, when citizens marched to the parliament and were fired upon, killing dozens. The demands now were for their president to resign. He fled that night like Marcos and his family did in February 1986. Yanukovych was granted asylum by Russia’s Putin, who has since been unrelenting in trying to destroy Ukraine, annexing neighboring Crimea and funding separatist movements. Last week, Putin sent in Russian troops, his last gambit to take over Ukraine.

The documentary should be watched by more Filipinos, for us to better appreciate the parallels between Ukraine and the Philippines, and how fortunate we were that our February 1986 revolt was short and bloodless. Seeing our current regime’s bloodlust, I shudder to think what it would have been like if Mr. Duterte had been in power in 1986. Chad’s FB was filled with tributes, including several that read “Rest in Power,” a somewhat awkward but meaningful rendering of “RIP” for the courageous women and men, Ukrainian or Filipino, departed but not gone.