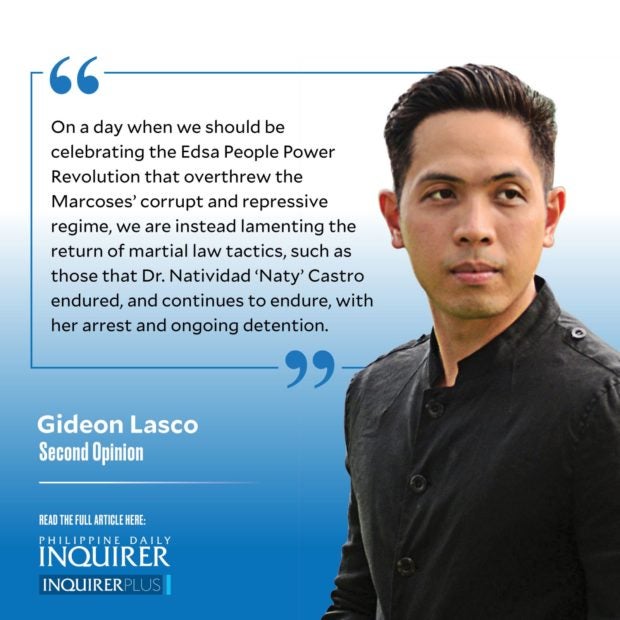 On a day when we should be celebrating the Edsa People Power Revolution that overthrew the Marcoses’ corrupt and repressive regime, we are instead lamenting the return of martial law tactics, such as those that Dr. Natividad “Naty” Castro endured, and continues to endure, with her arrest and ongoing detention.

The Philippine National Police claims that Castro was “arrested by a composite team of police and military intelligence operatives in Barangay San Perfecto, San Juan City” but her family members aver that the police “did not bring a warrant with them and did not bother to inform the household where she would be taken.” Thereafter, Castro was spirited away to Mindanao, allegedly denied access to her family, counsel, or medical needs in the process.

The police further claim that Castro belongs to the Communist Party of the Philippines’ central committee and head of the New People’s Army’s national health bureau, but her family and colleagues have strongly belied these claims, stating that she is in fact a medical doctor who has worked for the health and human rights of her communities. In any case, her right to be presumed innocent should have prevailed amid unsubstantiated allegations of kidnapping and illegal detention. Moreover, while there is no evidence of her being a “community terrorist,” what is abundantly clear is the evidence of activities as a community health practitioner.

The joint statement of UP Manila, UP College of Medicine, and UP Philippine General Hospital testifies to her work and character: “She has become a staunch human rights defender, specifically of the lumads and indigenous communities whom she has been attending to all these years. She is practicing what the UP has envisioned its graduates to be— community-oriented using the primary health care approach intended for the underserved.”

Castro—who has ended up in Bayugan City, Agusan del Sur—has since been met by the Commission on Human Rights and her two sisters, but the details of her case remain unclear and the fact that she remains detained puts into grave doubt to what extent her rights have been respected. Like Sen. Leila de Lima and so many other Red-tagged or drug-tagged personalities in the country, she stands the risk of protracted detention, especially with government agencies themselves being largely unsympathetic to her predicament. As many have pointed out, the Department of Health won’t even mention her name in their anodyne statement in which they vaguely called for “due process and presumption of innocence.”

Her detention, however, weighs heavily on her own communities, as well as her colleagues. “We are deeply concerned that the treatment of Dr. Naty Castro is sending a chilling message that will deter doctors from serving in the communities, especially since it is the government itself that is involved,” as the Department of Family and Community Medicine intoned in its own statement.

Their concern is even more significant in light of what has been happening in recent years, during which health care workers have not just been Red-tagged or detained, but killed outright—from Negros Oriental’s Dr. Mary Rose Sancelan to Cagayan de Oro’s Dr. Raul Winston Andutan; to date, most of these cases remain unsolved and justice remains elusive. As the UP Manila’s statement adds, this history extends all the way to Marcos’ martial law: “We still remember the sadness and anger [over] the deaths of our own graduates: Dr. Bobby dela Paz, Dr. Johnny Escandor, and Dr. Lou Tangco. We pray that this does not happen to Dr. Naty.”

Being a community doctor has already been challenging to begin with; Castro’s arrest and these recent cases are more likely to dissuade medical students from following their cases, further leading to health inequity. As the advocacy group Health Action for Human Rights pointedly asked: “Dr. Castro could have made a prominent career in medicine in the urban areas or even abroad. There is a huge lack of doctors in the rural areas where one out of 10 Filipinos die without even being able to have a health consultation. There are only a few doctors who choose to work for the poor. Why arrest her?”

Why, indeed, are community doctors seen as rebels and terrorists? The answer is the same reason why we should stand in solidarity with them: because they correctly diagnose health to be political, and they rightfully speak the inconvenient truth that the only way to truly treat the members of their community is to end their oppression, from the destruction of their environment to the trampling of their land and labor rights.

Read Next
Edsa revolution: Meaning and legacy
EDITORS' PICK
Unleash the photographer in you this World Photography Day with vivo smartphones
Look Through: The fate of impounded stray dogs
Metro Manila’s COVID-19 cases on downward trend, but surge not over — OCTA
What to watch out for when selecting a video surveillance solution
Palace warns sugar hoarders after raid on Pampanga warehouse
House energy committee chair Arroyo bats for cheap electricity
MOST READ
WATCH: Rick Astley re-creates ‘Never Gonna Give You Up’ music video 35 years later
Man abducted in Batangas gasoline station, found dead in Quezon
DOJ indicts bank officer in $2.1 billion Wirecard fiasco
PNP bars US legislators’ visit to De Lima due to lack of authority from court
Don't miss out on the latest news and information.