Redeeming the promise of Edsa

A shocking reminder that the 1986 Edsa People Power Revolution remains an unfinished business was the unabashed playing in some campaign rallies of “Bagong Lipunan,” the anthem of authoritarian President Ferdinand Marcos’ New Society, which gave way to a brutal and plunderous martial law regime.

How could Filipinos have forgotten the horrors of one of the darkest eras in Philippine history? Has the country’s collective memory been lobotomized?

As a cursory look at official news sources would reveal, martial law was never a “golden age,” contrary to what your neighbor’s grandparents claim nostalgically, or social media trolls insist on belligerently.

With Marcos cronies taking over major industries and incurring huge loans guaranteed by government, the country’s foreign debt ballooned from $600 million in 1965 when Marcos took office, to $26 billion in 1986 when he was ousted. The peso plunged from P3.90 to a dollar in 1965 to P18.60 in 1985.

While a few families lived it up, most Filipinos had to queue for hours for that unpalatable mix of rice and milled corn that became a staple among the poor. Poverty drove tens of thousands of Filipinos to jobs overseas, with labor export becoming official government policy. Congress was dissolved while media was shuttered, only to emerge as a New Society mouthpiece run by Marcos relatives and cronies.

Those who dared protest—students, teachers, activists, farmers, and suspected dissidents—were arrested, tortured, disappeared, or salvaged. According to Amnesty International, at least 107,200 victims were killed, tortured, and imprisoned by the Marcos regime. Some 70,000 others were wrongly arrested and detained.

While more roads, bridges, and infrastructure projects became the hallmark of the Marcos rule, they also became convenient conduits for huge kickbacks that lined the pockets of top officials of the day. The World Bank and the United Nations Office on Drugs and Crimes said the Marcoses stole between $5 billion and $10 billion from the country’s coffers. In 1995, a Zurich court ordered Credit Suisse and another bank to return $500 million of Marcos stolen funds to the Philippines. (As though a fitting reminder to Filipinos, and on the eve of the 36th anniversary of Edsa at that, an international media investigation dubbed the “SwissLeaks” over the weekend unmasked how Credit Suisse held billions of dollars in ill-gotten funds from criminals, fraudsters, and corrupt politicians for decades, including a dummy account for Ferdinand and Imelda Marcos.) 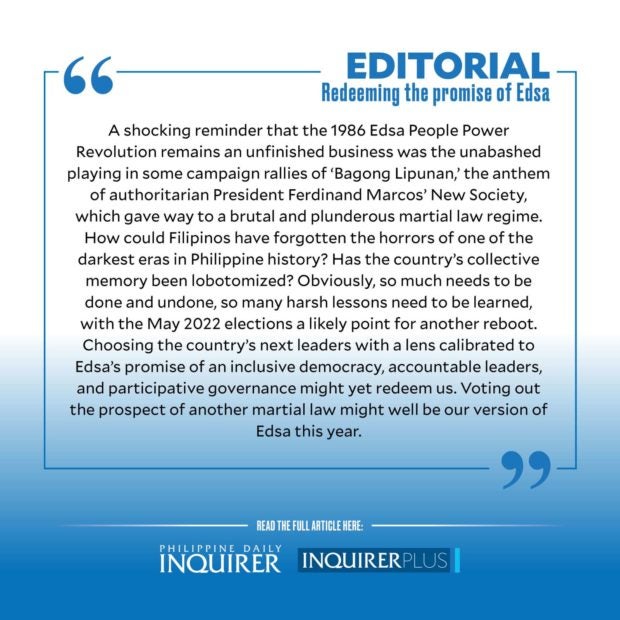 Such brazen abuses and the chilling murder in 1983 of Marcos rival, former senator Benigno Aquino Jr., led to popular street protests that culminated with the four-day Edsa people power revolt from Feb. 22 to 25, 1986.

But the euphoria of chasing away a dictator to US exile and getting back democratic space has given way to skepticism, even despair. The economy remains moribund, overseas Filipino workers are still a major contributor to GDP, a few prominent families continue to hold sway over local and national politics. The Presidential Commission on Good Government is still running after P125.9 billion in Marcos ill-gotten wealth as of September 2021, while too much power remains concentrated in the police, as evidenced by the arbitrary arrest of Dr. Natividad Castro last week. Despite his excesses, Marcos gets buried at the Libingan ng mga Bayani. New cronies have sprung up, taking over major businesses from telecoms to oil and pandemic supplies. Huge foreign loans from China raise the specter of more taxes crippling our children’s future.

The extrajudicial drug-related killings of this administration have meanwhile sank the country’s rating in the 2021 Democracy Index—54th out of 167 countries—with the Philippines being described as a “flawed democracy.”

Thirty-six years later, were the hopes we’ve invested in Edsa been for nought? Maybe not. As journalist Ed Lingao notes, “Was Edsa a failure? No, I suppose we were the failure.”

Call it a dress rehearsal then, when cues were missed, lines misread, and actors miscast. We had gotten rid of a rotten political system, confident that a genuine democratic process would take hold after 14 years of autocratic rule. Who wants to go back to that anyway? But maybe we’ve become too complacent, thinking that we’ve done our part and can now sit back while others do the work. We didn’t even tell our Edsa story and what it stood for to our children, allowing others to do it. But with political ambitions shaping fake news and disinformation on social media, we suddenly woke up with a revised history we can barely recognize.

Obviously, so much needs to be done and undone, so many harsh lessons need to be learned, with the May 2022 elections a likely point for another reboot. Choosing the country’s next leaders with a lens calibrated to Edsa’s promise of an inclusive democracy, accountable leaders, and participative governance might yet redeem us. Voting out the prospect of another martial law might well be our version of Edsa this year.