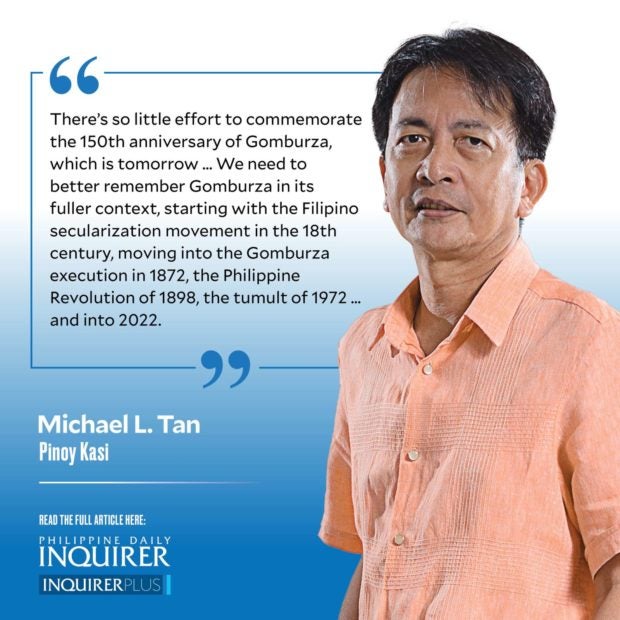 Gomburza. A blurred image is probably becoming clearer in your mind, of three priests, one seated, two standing, all young.

The seated priest is José Burgos, who is the one usually remembered because there are streets and towns named after him. Burgos was 35 when he was executed.

Standing to his right is Jacinto Zamora, only two years older than Burgos. Finally, there’s Mariano Gómez (sometimes spelled Gomes), who would have turned 73 the year he was executed.

So, the popular depiction of the three priests isn’t quite right, as are many articles and posts in the internet, including a Wikipedia entry on “Gomburza.” Even worse, there’s so little effort to commemorate the 150th anniversary of Gomburza, which is tomorrow.

Yet, 1872 was a watershed year in terms of the concept of “Filipino” as an identity.

The Philippines was in ferment, with the tensions particularly strong among the clergy, who were dominated by peninsulares, Spaniards born in Spain and predominantly friars, members of the religious orders, who had come to represent the abuses of Spanish colonialism.

Challenging the peninsulares were the criolles or insulares, Spaniards born in the islands of the Philippines, many of them Spanish mestizos, usually born of a Spanish father and a “native” woman or indio.

The three Gomburza priests were Spanish mestizos, and secular, meaning they did not belong to particular religious orders. A royal decree issued in 1774 had ordered the assignment of parishes to secular priests, a move which upset the religious orders because this diluted their control over the Spanish colony.

The racial angle is important, with the Spanish friars echoing peninsular arrogance that attacked the native indio population, and mestizos, as being of inferior intelligence.

In Latin America, it was the criolles who fought, and won, wars of independence. In the Philippines, the insulares or criolles were the ones who called themselves “Filipino” and to speak about Filipino rights. Among the more outspoken criolles were the secular priests. One such secular priest, Pedro Pelaez (1812-1863), was particularly influential and was Burgos’ mentor. Pelaez was killed during the Manila earthquake of 1863; if he had lived longer, he probably would have been executed together with the Gomburza priests.

On Jan. 20, 1872, a mutiny broke out in Cavite, involving some 200 soldiers and dockworkers protesting new taxes and other policies of the colonial government. This presented an opportunity for the anti-secular forces to blame the three priests for the mutiny, who were arrested, tried, convicted, and executed all in less than a month.

Following the execution, the Archbishop of Manila refused to defrock the priests and instead ordered Manila’s churches to peal their bells in mourning.

Among the people who witnessed the execution was Paciano Mercado, one of many students influenced by Burgos. Paciano knew how serious the situation—the Terror of 1872, as it was called, was not just the Gomburza execution but a number of other criolle laypeople, such as Trinidad Pardo de Tavera, who were arrested and exiled to the Marianas. For their protection, Paciano urged his family to change their surname … to Rizal.

Paciano’s younger brother Pepe was only 10 at the time of the Gomburza execution, with some accounts saying Pepe was there, too, at Bagumbayan.

Pepe is of course Jose Rizal, who later dedicated his novel “El Filibusterismo” to the three priests and once wrote to Mariano Ponce that he would have become a Jesuit if it had not been for the martyrdom of the three secular priests. (Rizal loved and admired many of his Jesuit teachers at the Ateneo.)

Only 15 years after the Gomburza execution, Rizal wrote about himself and the people producing a newspaper, La Solidaridad: “They are criolles, mestizos and Malays, but we call ourselves only Filipinos.”

On Feb. 17, 1972, on the 100th anniversary of Gomburza, a group of Catholics and Protestants involved in social action met in the Sampaloc University Center and established Christians for National Liberation. They had to go underground a few months later when martial law was declared.

We need to better remember Gomburza in its fuller context, starting with the Filipino secularization movement in the 18th century, moving into the Gomburza execution in 1872, the Philippine Revolution of 1898, the tumult of 1972 … and into 2022.