No ‘golden age’ under Marcos 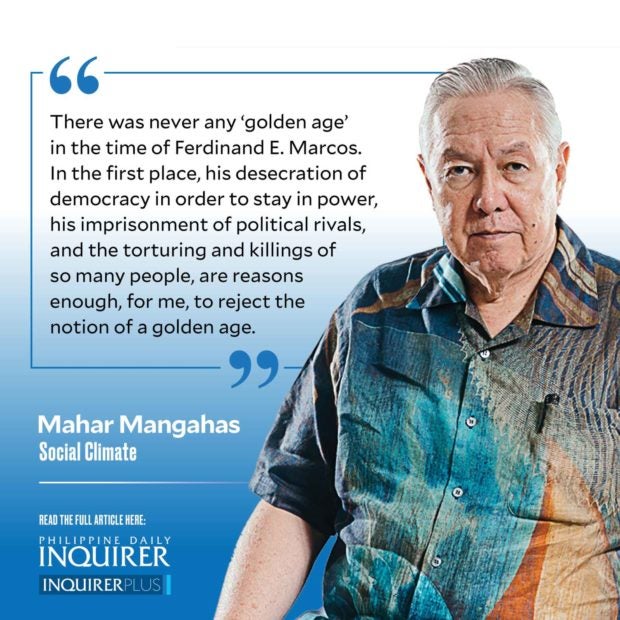 There was never any “golden age” in the time of Ferdinand E. Marcos.

In the first place, his desecration of democracy in order to stay in power, his imprisonment of political rivals, and the torturing and killings of so many people, are reasons enough, for me, to reject the notion of a golden age.

But, aside from the crass violations of democracy and human rights, weren’t there other good things during Marcos’ time that could compensate, and tilt the balance in his favor? My answer to that is also an emphatic NO.

In late 1973, I was one of those recruited by Dr. Onofre D. Corpuz (ODC) from the University of the Philippines to help out at the Development Academy of the Philippines (DAP), newly created by Marcos’ decree. In his shopping list of research topics, I saw the phrase social indicators for the first time, read up on it, and volunteered for it. Was it possible to freely do academic research under martial law? ODC was willing to gamble, and I joined him in it.

I became director of the DAP’s pioneering Social Indicators Project (SIP). From internal funding, it mobilized 14 researchers, half of them full-time. We survived Red-tagging by a nameless watcher who frowned on one of us having the surname “Lava”; ODC made sure the staffer could stay. (Another staffer, related to an activist stranded in China by martial law, quietly fled abroad.) When we wanted to test our ideas with a pilot survey, DAP executive vice president Horacio “Boy” Morales—he who went underground in 1977, which is another story that will further deny the claim of a “golden age”—found the funds for a 1,000-household sample in Batangas.

After two years, the project produced the 574-page book “Measuring Philippine Development” (DAP, 1976; MPD for short). It was organized along “social concerns,” with chapters on Health and Nutrition, Learning, Economic Well-Being, Poverty Thresholds, the Physical Environment, Public Safety and Justice in the Administration of the Law, Political Opportunity and Political Welfare, Social Mobility, and A Pilot Survey on Social Indicators. I did the summary, “The Measurement of Philippine National Welfare,” and was general editor.

What did Marcos think about it? In the book’s foreword, ODC mentions “a direct expression from the President of general moral support of the Social Indicators Project.” My own chapter cited an agreeable passage (p.6):

“An ideology for the new society must, therefore, base itself on one ruling principle, that the interests, objectives and needs of the poorest of the working people must take precedence over those of the rest” [Marcos, “Notes on the New Society of the Philippines,” 1973, p.52].

With respect to poverty, the SIP devised poverty lines (the government had none) and, using official surveys of income since 1956, found: “… the gap between incomes of rich and poor has definitely widened since 1956. … Both the absolute and relative numbers of families not able to meet minimum food requirements and minimum total requirements have increased substantially since 1961.” [MPD, p.31] Definitely, there was no “golden age” with respect to poverty. Remember that Marcos had been president since 1965.

The project’s objective was to design indicators according to established principles, apply them whenever underlying data were available, and propose experimental indicators if new data would have to be collected. The pilot survey tested the experiments. It proved the feasibility of the Self-Rated Poverty concept, and found that 53 percent of Batangas families felt themselves mahirap. It applied the 10-point ladder-ratings presently used in global “happiness” studies, and got answers close to 5 points, i.e., mediocre.

For the overall picture of Philippine development, read the book. There’s no trace of a golden age.