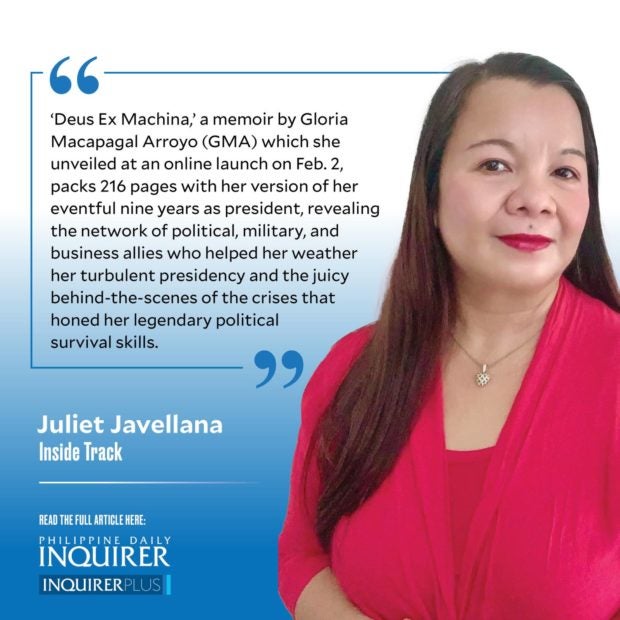 Deus Ex Machina,” a memoir by Gloria Macapagal Arroyo (GMA) which she unveiled at an online launch on Feb. 2, packs 216 pages with her version of her eventful nine years as president, revealing the network of political, military, and business allies who helped her weather her turbulent presidency and the juicy behind-the-scenes of the crises that honed her legendary political survival skills.

Divine intervention, GMA asserted, played “such an important role in my career’’ thus the choice of title of her memoir. One of those moments was the Senate impeachment court’s move not to open the “second envelope’’ that led to the ouster of President Joseph Estrada in Edsa II and her succession to the presidency in 2001.

GMA decided not to run for president in the 2004 elections so as not to further divide the nation. But in May 2003, when she called up Manila Archbishop Jaime Cardinal Sin to officiate at the wedding of her son Dato, the cardinal told her: “I know you said you will not run in 2004, but you should and you will win.’’ The Oakwood mutiny further changed the political environment and strengthened her resolve, so she decided to run.

And then the fateful 2004 telephone call. GMA said that by the time of the phone call with Election Commissioner Virgilio Garcillano on May 24, the top 11 senators were already proclaimed. The votes for the 12th and 13th senators were still being canvassed but that the number of votes at stake would not have wiped out her lead, she pointed out. She went on TV to say “I am sorry’’ for her lapse in judgement but clarified that “my intent was not to influence the outcome of the election that had already been decided.’’ Her vindication came on Jan. 18, 2008, she said, when Loren Legarda lost her electoral protest against Vice President Noli de Castro, GMA’s running mate. She could not have cheated based on the same certificates used to proclaim De Castro’s victory, she said.

According to her, the “Hello Garci’’ scandal was the “perfect storm of controversy, gossip, and intrigue’’ that was the culmination of destabilization efforts against her government. “Where do I stand on the question of ‘I am sorry’ now, some 15 years later?’’ she wrote. “In the long run it is better to own up to one’s self-inflicted error. It was a lapse in judgment, which is a general way of acknowledging that the phone call was a mistake.’’

That crisis led to Hyatt 10, when 10 members of her Cabinet called for her resignation in 2005. The night before the Hyatt 10 withdrawal of support, former president Cory Aquino came to the Palace with some bishops to tell her she (Aquino) would deliver a speech the next day asking GMA to “make the supreme sacrifice’’ of resigning.

As Cory Aquino was leaving the Palace, she was overheard commenting that she was struck by how GMA took it when she told her to resign. “She didn’t even blink!’’

Reflecting on that visit by Cory Aquino, GMA said she had developed “a lot more steel since those days nearly a decade ago when as a novice female locking horns with some of the most battle-hardened, most macho politicians…, it was said I would break down in tears.’’

“I was not about to break down now, much less break into tears. Indeed, I stared into the political abyss that she was threatening me with, and I did not blink,’’ she said.

Her frayed relations with Cory Aquino, whom she had considered an ally and key mentor, mirrored that of her strained relations with President Benigno “Noynoy’’ Aquino III. Indeed, a big part of GMA’s memoir detailed her “unjust persecution’’ by the P-Noy administration through a slew of cases that put her in detention from 2011.

Fast forward to 2017. At an event in Clark on Dec. 7, 2017 with President Duterte, GMA recalled that Davao City Mayor Sara Duterte arrived ahead of her father. “Sara asked if I was willing to be Speaker of the House.’’ She was surprised, and pointed out that Speaker Pantaleon Alvarez enjoyed the trust and confidence of her father. “The night before the July 23, 2018 SONA day, Mayor Sara went to Medy’s (Poblador) house and decided to really call the congressmen, so everything happened so fast.’’ Minutes before the SONA, GMA took her oath as Speaker. “I am arguably the most maligned woman in our history …’’ GMA wrote. “Thus, to someone like me, redemption is precious.’’