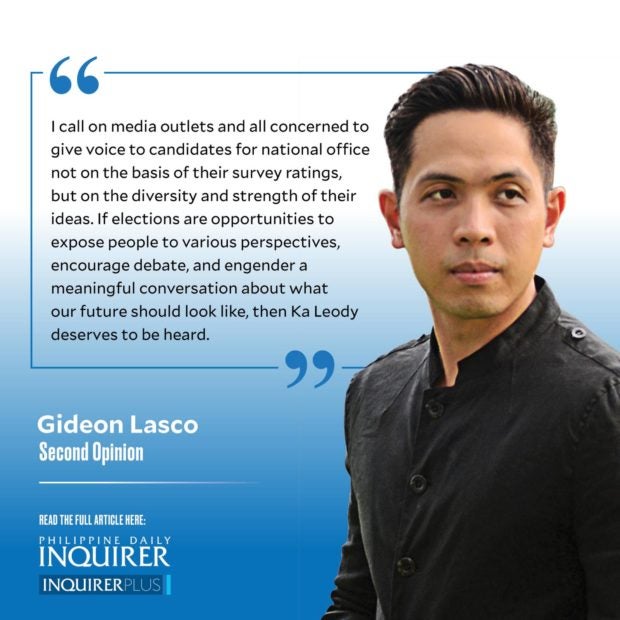 Elections are not just a mechanism to choose our next leaders; they are an opportunity to raise issues that matter to our people, and to debate, discuss, and ultimately decide what the future of our country should look like.

I saw a glimpse of this in 2010, when leaders in the health sector, including the late Dr. Quasi Romualdez and Dr. Ernesto Domingo put health care reform high on the agenda, getting candidates (including eventual winner P-Noy) to commit to universal health care. Rather than just passively selecting the candidate with the best health platform, they were shaping the health platforms of the candidates.

For this reason, I feel that the candidacy of Ka Leody de Guzman, unionist and labor rights activist, and his running mate, the academic and activist Walden Bello, deserves more attention, given how their ideas are markedly different from those of the other candidates

Or, to put it differently, Filipinos deserve to hear their ideas.

This has been especially made clear in the recent televised interviews and debates. Now, I do not mean to paint an equivalence between candidates who promise to shield President Duterte from the International Criminal Court and those who promise accountability and justice. Beyond what they say and what their sleek advertisements portray, there is also a sea of difference between someone who regularly took the bus to her hometown in Bicol and someone whose idea of misery is not being able to fly first class.

However, while the alignment of most of the candidates in some issues is welcome (for instance, rejecting EJKs and recognizing the need to address rampant corruption), their homogeneity in others makes me somewhat uncomfortable.

For instance, with regard to the environment, most of the candidates have expressed openness or support for the idea of “responsible mining.” They may well have their reasons for espousing this view, but don’t we deserve to hear from a candidate who thinks otherwise; someone who is unequivocal in his view that “destructive mining should be stopped in the country because it endangers the lives of citizens” and that we should be working toward a “green economy”?

Meanwhile, in social issues, most of the candidates are against legalizing abortion and same-sex marriage. They may well represent the majority in their social conservatism, and, in fairness, some candidates are more nuanced than others in taking these positions. But don’t we at least deserve to hear an argument about how abortion laws are hurting women and why abortion ought to be decriminalized? And don’t we also deserve to hear an argument for legalizing same-sex marriage?

As for the economy, most of the candidates embrace foreign investments, with some even expressing openness to amending the Constitution to allow for foreign ownership of public services. Again, they may have reasons for and caveats in taking this view, but don’t we deserve to hear an indictment of this neoliberal framework and a call for more fundamental and structural reforms in agriculture, industry, and labor?

And what of health care, militarization, and foreign policy?

Of course, supporting Ka Leody’s right to be heard in the same stage as other candidates does not necessarily mean supporting his candidacy or his platform; one only needs to recognize how his ideas might force others to defend and sharpen theirs. This is especially true because platform is not the only criterion for choosing a candidate; there’s also the leadership to actually push for them; the openness to listen to and accommodate other perspectives; a track record of integrity, moral courage, coalition-building; and—as COVID-19 has highlighted—having the ability to respond to disasters and other crises. (For these reasons, I believe that Leni Robredo is the best choice to be our next president).

Others would add “winnability,” but this is why the non-platforming of Ka Leody is even more problematic: Media outlets use popularity as a metric for who to invite in debates and interviews, even as they themselves are partly responsible for that popularity.

Thus, I call on media outlets and all concerned to give voice to candidates for national office not on the basis of their survey ratings, but on the diversity and strength of their ideas. If elections are opportunities to expose people to various perspectives, encourage debate, and engender a meaningful conversation about what our future should look like, then Ka Leody deserves to be heard.