Pharmally and the President’s men

There were no surprises when the House of Representatives committee on good government and public accountability released its report on the anomalous deal involving pandemic supplies from Pharmally Pharmaceutical Corp. While predictable and par for the course, given how the House conducted a tepid investigation into what a Pharmally executive herself described as a “swindle” of government funds, the report was nonetheless appalling for glossing over the enablers and protectors of the multibillion corruption case.

The committee had recommended the filing of syndicated estafa charges against several officials of Pharmally Pharmaceutical Corp. for the irregularities in the deal, but found “no sufficient evidence” against former presidential economic adviser Michael Yang and former Department of Budget and Management-Procurement Service (PS-DBM) head Lloyd Christopher Lao.

Yang and Lao have been linked to overpriced contracts between the government and Pharmally, with a company official claiming that it was Yang, a Chinese national, who had provided them loans to supplement Pharmally’s paltry P625,000 paid-up capital. Yang had maintained that it was his friends who provided funds to the Taiwanese company that managed to corner P11.5-billion in pandemic supply contracts. Lao, meanwhile, headed the PS-DBM to which the Department of Health, with Health Secretary Francisco Duque’s approval, had transferred P42-billion in pandemic funds. The transfer was flagged by the Commission on Audit (COA) for “lack of supporting documents.”

In the partial report released by the Senate blue ribbon committee on Tuesday, Duque, Lao, and Yang were among those recommended for graft and plunder charges that also included several Pharmally executives and Overall Deputy Ombudsman Warren Rex Liong, who used to be a director at the PS-DBM.

An expert witness in the Pharmally probe also told the Senate panel that the company owes the government up to P6.3 billion in taxes from the supply contracts.

Unlike the sanitized House report, the Senate report was more forthright and fearless in naming the cabal behind the Pharmally mess. While the Senate report did not recommend charges against President Duterte, citing his immunity from suit during his incumbency, it was unsparing in detailing the chief executive’s accountability “for what has transpired in this great anomaly.” The report was referring to the Pharmally pandemic supplies, most of which were later found to be overpriced, with the face shields found to be substandard and their production dates altered to conform with DOH requirements. 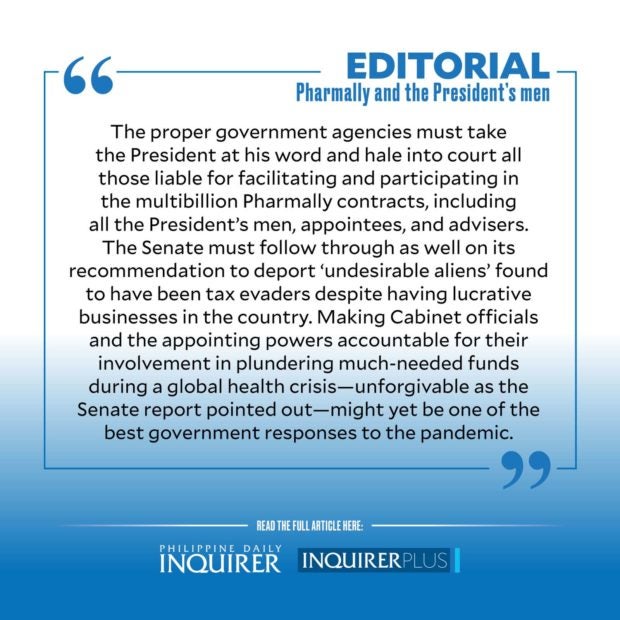 Mr. Duterte’s alleged offenses, according to the report, included appointing Yang, a foreign national, as his “economic adviser” in 2018; seeking to discredit COA and making threats to prevent it from functioning; trying to discredit the Senate by “publicly attacking, maligning and disrespecting” a coequal branch of government; ordering the issuance of a “patently illegal” memorandum preventing his Cabinet members and other officials from attending Senate hearings, and failing to hold his appointees accountable for “one of the biggest plunders of the Philippines’ coffers in recent history.”

The report, which is yet to be approved by the Senate, noted that the acts of “malfeasance, misfeasance, and/or non-feasance” by government officials in cahoots with Pharmally officers were consummated “under the nose of the President,” and produced “a stench that would have been impossible to ignore in Malacañang.” Instead of investigating the matter, the Chief Executive “chose to defend and protect those closest to him” despite their culpability, the report added.

Sen. Richard Gordon, panel chair, said the President “must be held accountable” for betrayal of public trust, a ground for impeachment that was not however specifically recommended in his committee’s report. His hour of reckoning must come after his term, the report said ominously.

In response, acting presidential spokesperson Karlo Nograles said the President had always maintained that he will not get in the way of possible charges against those found culpable in the Senate hearings, even if they are his own officials. All Mr. Duterte wants, Nograles said, is for government to get on with its pandemic response.

The proper government agencies must take the President at his word and hale into court all those liable for facilitating and participating in the multibillion Pharmally contracts, including all the President’s men, appointees, and advisers. The Senate must follow through as well on its recommendation to deport “undesirable aliens” found to have been tax evaders despite having lucrative businesses in the country.

Making Cabinet officials and the appointing powers accountable for their involvement in plundering much-needed funds during a global health crisis—unforgivable as the Senate report pointed out—might yet be one of the best government responses to the pandemic.