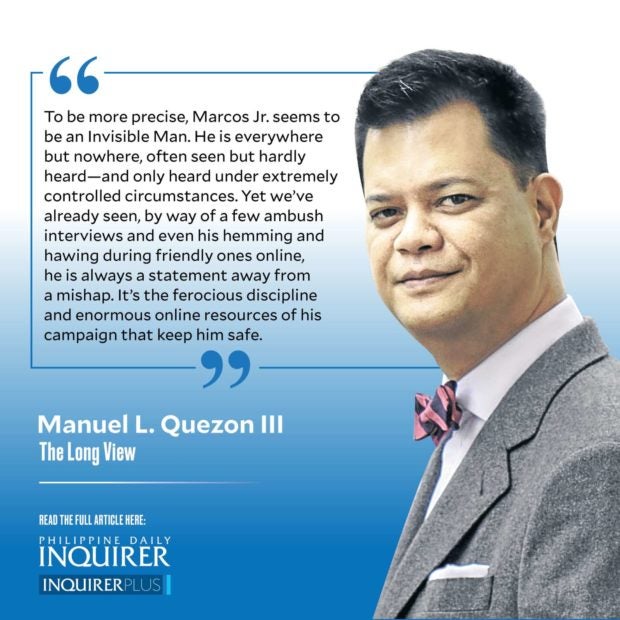 We won’t know what the combined effects of Supertyphoon “Odette” and the Omicron wave were (or weren’t), on the campaigns that officially begin on Feb. 8. I’m interested to know if either or both applied the brakes on the phenomenal boosting of the Marcos candidacy, which had begun to take on the characteristics of mass hysteria before Christmas. For now, all we know is that the campaign-not-a-campaign that’s so far taken place is coming to an end. This means now comes the hard part for all candidates. In the past, this also marked the beginning of the end for hitherto frontrunners in many a presidential contest.

A possible sign of things to come was the manner in which Ferdinand Marcos Jr. had to recalibrate after refusing to submit to an interview by Jessica Soho and then issuing a long statement using bias against his family as the reason. Even some of his supporters, judging from social media, were disappointed by his lack of intestinal fortitude. The recalibration came in the form of the candidate saying he’d submit to an interview by Boy Abunda, although no one expects hardball questions there. Then again, and this is the problem with live TV specifically, you never know. Every interaction carries with it a risk, so why not avoid it?

Commentators have taken to ransacking the past for the political reasoning behind such a disappearing act, and usually point to the late Sen. Genaro Magsaysay: “More talk, more mistake; less talk, less mistake; no talk, no mistake.”

I’ve heard it said that former Senator Marcos speaks eloquently and without the need of notes when it comes to topics he’s interested in. It seems only fair to point out his mind or at least the repartee is less keen when the unpleasant comes up. Then he becomes irked and petulant as a result—in a word, pikon. Which makes for bad TV for any candidate. And so it clearly became a campaign rule to keep the candidate away from confrontational media people (or their questions) and restrict interactions only to the adoring or at least, the friendly.

And so the blog “Heneral Lunacy” (by retired investment banker Leo Alejandrino) recently described Ferdinand Marcos Jr. in airy terms as a candidate: “BBM is not a person nor an ideology. He is an aura, a political identity, a brand, a representation of a time and a legacy.”

Is he, then, a cotton candy candidate? To be more precise, he seems to be an Invisible Man. He is everywhere but nowhere, often seen but hardly heard—and only heard under extremely controlled circumstances. Yet we’ve already seen, by way of a few ambush interviews and even his hemming and hawing during friendly ones online, he is always a statement away from a mishap. It’s the ferocious discipline and enormous online resources of his campaign that keep him safe.

Which brings us to the same blogger description of Marcos’ campaign as featuring “a well-run organization led by his wife Liza, a lawyer.” By zeroing in on Louise Araneta Marcos’ role, he performed a rare public service only previously matched by veteran journalist Raissa Robles. “Heneral Lunacy” boiled it down as follows: “Liza is the ideal politician’s wife: Soft-spoken, discreet, dedicated, smart, discerning, tough, organized, dogged, ambitious—she could well want it even more than her husband—and the laser instinct to get it done. She seemingly loves the power game even if she may deny it.” Which is a rather gallant way of saying that the spark and spine in that political partnership seem to belong to the candidate’s wife.

The Invisible Man thus comes as part of a package deal with the Invisible Woman. Those who think they have taken the measure of the husband must consider if they have had an opportunity to take the measure of the spouse. Much as President Duterte’s common-law marriage received social and diplomatic acceptance, by and large his partner stayed in the background which means it’s approaching a dozen years since the country last had a presidential spouse perceived to be intimately involved in governance. To this day, many if not most Filipinos remain unaware of the extent to which Christopher Go was—is—Acting President; this promises that the situation can just as easily be replicated in the future, if not surpassed.