The story of “mango thief” Leonardo Flores of Asingan, Pangasinan, continues to unfold, raising hope of resolution in the best interests of the parties. The contentions that are slowly being revealed provide a glimpse of how the wheels of justice grind in rural areas. That Imelda Marcos’ graft conviction trended immediately after Flores’ story went viral online serves as reminder of how differently these same wheels turn in high places, and suggests that some Filipinos don’t forget.

Flores, 84, was arrested on a theft complaint on Jan. 13 and thereafter detained. He was released a week later through the kindness of strangers whose cash donations enabled him to pay a P6,000 bail bond and go home with more to spare. Accused of stripping a mango tree in his neighbor’s property and selling the loot, he will be arraigned on Feb. 8, per his counsel James Fernandez of the Public Attorney’s Office.

Flores’ case was put in jarring juxtaposition with that of the former first lady who, in November 2018, was convicted of graft on seven counts by the Sandiganbayan yet has never so much as smelled the stench of prison. Authorities walked on eggshells upon her conviction, tenderly citing her advanced age: She was 89 then. Neither Marcos nor her army of lawyers saw fit to be present when she was declared guilty of funneling about $200 million to private Swiss accounts she had opened in the 1970s and ’80s when she was governor of Metro Manila.

It’s not difficult to understand why the story of Lolo Narding touched a raw nerve. Here’s the old guy seemingly already doing time in the Asingan detention facility, with no benefit of counsel until the last minute, and there’s the “Iron Butterfly” enjoying her freedom in her fabled Pacific Plaza quarters that, photographs showed, were filled with all manner of luxury items. 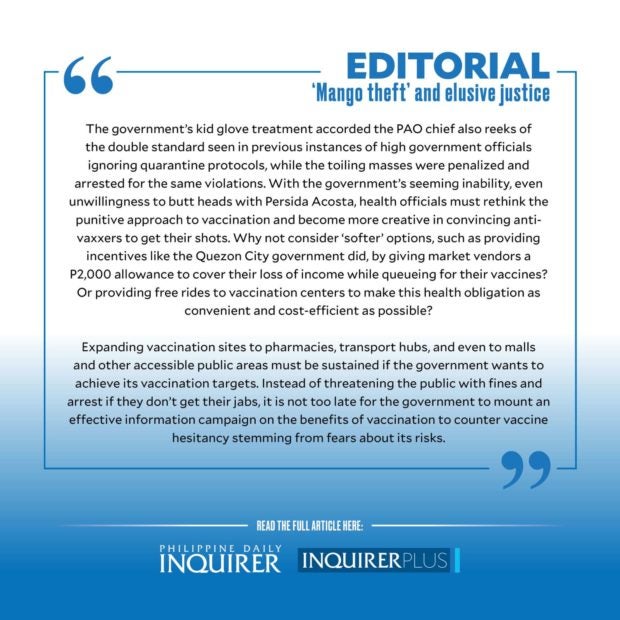 While musing on the breathtaking contrasts of life in these parts, the weary observer might also wonder at the progress of the plunder charges against two ex-senators, and whether Sen. Bong Revilla, himself cleared of plunder by a vote of 3-2, has complied with the order of the Sandiganbayan and the Office of the Ombudsman to return P124.5 million to the national treasury. Details like these have a way of surfacing in the national consciousness when stuff like the arrest of an 84-year-old for the supposed theft of P12,000 worth of mangoes is reported.

But just as Flores was being released on bail, the complainant Robert Hong was complaining to Sen. Panfilo Lacson’s staff that he had been cyberbullied into disappearing from view, so fearful for his life that he had not even been able to return to work as a truck driver at a quarry site. Being the offended party, Hong, 52, said he was being portrayed as the villain, and the offender Flores the victim.

Long story short, per Hong’s complaint: Flores took and sold the fruit that amounted to 10 crates at P1,200 a crate in April 2021, but refused to pay him the amount of P10,000 despite three mediation meetings hosted by barangay officials. Lawyer Fernandez maintains that Flores was “duped by a wholesale buyer” who paid him P1,000 for 10 kilos, and that it was not so much a refusal as an inability by his client to pay. Flores is recorded as saying that Hong should just file a case against him and have him jailed.

Lacson, who had intended to come to Flores’ aid but needed to first ascertain the facts, said there was a “twist” to the viral narrative: The old man “did steal” mangoes worth P12,000 and spent the proceeds, the senator said, adding that Hong and his family were under threat and “crying for justice.”

Hong himself has said that all he needed from Flores was a public apology and a promise not to do it again. But in the latest update on the matter, the Inquirer’s Yolanda Sotelo reported that Flores was paid only P600, and not P1,000, for the mangoes he was supposed to have stolen. And per the barangay records, he has apologized to Hong three times—twice during the first mediation meeting on April 26, 2021, and again during the third, on May 6.

Justice: what a tangled, complicated, and tortuous concept in these parts. How long do we wait for all those high and mighty convicted of graft or plunder to apologize and atone for all the pain and suffering they’ve inflicted on Filipinos during their term?