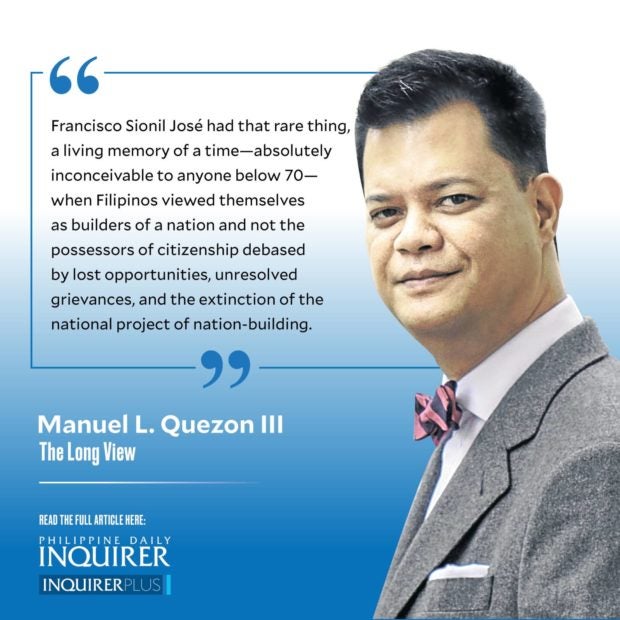 That was the name of his journal, published in the shop that bore the Spanish version of the word — Solidaridad. It was, I believe, the guiding principle of his life, even when his words and ideas served to alienate others. The Magsaysay Award, given to Francisco Sionil José for being “An author and journalist from the Philippines who guided and assisted numerous Filipino and foreign writers, artists and scholars in a rich cultural and intellectual exchange,” put it concisely and best. This is what he did indeed do, and for which, to my mind, he was and will always be, a Filipino of rare distinction. He lived and breathed solidarity.

He counted — and kept — friends from all walks of life, from different generations, and many nationalities. My father was always fond of him, and so am I, because he providentially provided a key to freedom: during a visit to his bookstore, he mentioned to my father that he had a consignment of Brazilian magazines and would he care to read them? There began a life-long love for that country, its language, its thinkers, and music and visits that I am convinced was as close as my father ever came to enjoying life without the crushing burden of expectations.

And there are many, like myself, who, from time to time, received notes from him: sometimes simple words of encouragement (always gratefully received); on other occasions, simply a statement of lively interest (always the best thing to receive).

To my mind what set him apart weren’t his novels (though this is what he took the greatest pride in, perhaps) but his opinions, and in particular, his vigorously demonstrating the role of opinion-making (and writing) in a society like ours: as provoker, confronter, and explorer. To the very end, he would not—because he could not—be ignored, not least because hardly anyone is left who could, or would, dare to confront him on his own terms. Instead, the overwhelming majority of responses to his views were ad hominem attacks, the kind of thundering and shrillness that is all heat and hardly any light, because to anathemize a writer is not to defeat, denounce, or defang him, but ultimately, to enhance him. I suspect he relished proving time and again he incarnated ideas that revealed he had a surer finger on the public pulse than all the ideologically-driven denouncers relentlessly attacking him and his ideas but who didn’t dare to engage him. Rare were—are—who did so: Clinton Palanca, Leloy Claudio, and even the Chinese Filipino businesspeople who organized a dialogue with him; Krip Yuson, confronting him on Mr. Duterte, Joel Pablo Salud, ditto on the shutdown of ABS-CBN.

By the turn of the century he had outlived most of his peers, and out of sheer longevity his opinion writings, heavy with memories, grew even more ferocious and reprehensible to the majority who were his juniors. He had that rare thing, a living memory of a time—absolutely inconceivable to anyone below 70—when Filipinos viewed themselves as builders of a nation and not the possessors of citizenship debased by lost opportunities, unresolved grievances, and the extinction of the national project of nation-building. The relicts of that era often surfaced in his opinion writing—reminiscences and references to the parades that were a feature of prewar Commonwealth days—and his political inclinations: what was his repeated flirtation, after all, with the idea of the military as potentially modernizing force, than a manifestation of what the Commonwealth generation had set out to do: create a professional class imbued with honor and dignity, without the entanglements and affectations of the rulers?

We have replaced all these characteristics with a circular firing squad of national denial. Having lived long enough to not only fictionalize the past but live and learn from it, he tormented his public by perpetually reminding it of something only he, increasingly, could still recall: the forward-looking dream of modernity systematically dismantled by both the Left and the Right from the Marcos era onwards. He never forgot the ultimate surrender every writer expressing an opinion is asked to make: first, to other writers, because of the possibility of a response better than yours; second, to the public whom you ultimately serve, who will read you, weigh you, and judge you far more mercilessly than yourself.