The passage in December of the law declaring child marriage illegal is indeed a “major victory,” as announced by its proponents in Congress.

Fundamentally, the law recognizes the necessity of providing children stronger protection against sexual abuse, and thus states that facilitating and solemnizing a child marriage, as well as adults cohabiting with children, are now a public crime. It prescribes a fine of at least P40,000 and imprisonment of up to 12 years for officers, parents, guardians, and other adults found to have fixed, facilitated, or arranged such a marriage.

The law also states that a child marriage is void from the beginning. With its passage, the Philippines confirms the stance it took in ratifying in 1990 the Convention on the Rights of the Child (which sets 18 as the minimum age for marriage), and in committing in 2013 to the Asean Declaration on the Elimination of Violence Against Women and Against Children (which acknowledges the need to boost regional efforts to protect children from all forms of violence including early marriage).

But it appears that the enforcement of Republic Act No. 11596, or An Act Prohibiting the Practice of Child Marriage and Imposing Penalties for Violations Thereof, would be an uphill climb. Almost immediately after a copy of the new law was released late last week, a resolution calling on President Duterte to defer RA 11596 was issued by the Bangsamoro Transition Authority, the interim governing body of the Bangsamoro Autonomous Region in Muslim Mindanao (BARMM). 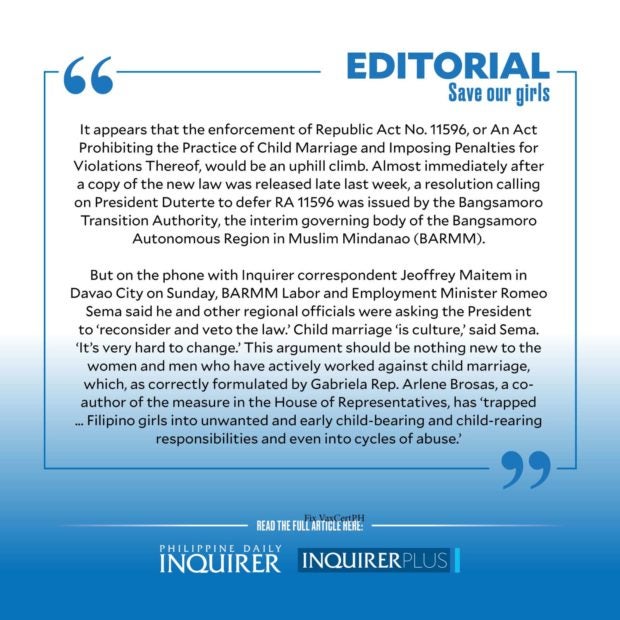 The law actually allows a transitory period of one year, in which its penalty provisions would be suspended for Muslims and indigenous peoples. But on the phone with Inquirer correspondent Jeoffrey Maitem in Davao City on Sunday, BARMM Labor and Employment Minister Romeo Sema said he and other regional officials were asking the President to “reconsider and veto the law.” Child marriage “is culture,” said Sema. “It’s very hard to change.”

This argument should be nothing new to the women and men who have actively worked against child marriage, which, as correctly formulated by Gabriela Rep. Arlene Brosas, a coauthor of the measure in the House of Representatives, has “trapped … Filipino girls into unwanted and early child-bearing and child-rearing responsibilities and even into cycles of abuse.” (Think of the case of the 27-year-old man first impregnating a child when she was 12 and then having another child by her.)

This argument typifies the mindset of men long benefited by a patriarchal system and bent on maintaining it for as long as they can enjoy its entitlements under the aegis of “tradition” or “culture.” This argument is why many Filipino girls, particularly in the South, are forced to bear children even as they are still children themselves—and forced to leave school and to ultimately propagate the cycle of impoverishment. (Yet Islam actually puts much focus on education as every person’s right.)

Expectedly, Noraida Abo, the executive director of the organization UnYPhil-Women in Lanao del Sur, called on the BARMM leadership to support RA 11596. “Ending child, early, and forced marriages is a huge win for the future of our Bangsamoro children,” Abo said, amplifying the fact that the crime directly threatens children’s health, well-being, and development.

The United Nations Children’s Fund, or Unicef, is clear on the fate of children forced into marriage: They are more likely to experience domestic violence, less likely to stay in school, and are at risk of early and unplanned pregnancy, thus raising the dangers of pregnancy complications, and even death. (Think of the two 10-year-old mothers from Metro Manila and Southern Luzon reported by the Philippine Statistics Authority in February 2021.) They are also at risk of isolation from family and friends, endangering their mental and emotional health.

In an effort to justify child marriage, it’s often said that under Islamic law, marriage is allowed for boys who have reached the age of 15 and girls who have had their first menstruation. Muslim lawyer Amanah Busran Lao called it an “obsolete” law that also violates children’s rights guaranteed by the Constitution. Not that, as Lao correctly pointed out, religion or culture should solely be blamed for child marriage: If the roots of poverty are not addressed, she said, “child or arranged marriage will continue as a practice.”

But there’s a ray of hope, or a boost to the continuing struggle. Sen. Risa Hontiveros, one of the authors of the bill in the Senate, said in November 2020 when it was passed on third and final reading: “Today, we give our girls a chance to dream, to define their future according to their own terms…”

Read Next
Solidarity
EDITORS' PICK
Mobile COVID-19 vaccination for commuters, transport workers set at PITX
Kalinga, Ifugao, Mt. Province, N. Samar will be under Alert Level 4 from Jan 21-31
31,173 new COVID-19 cases push PH’s active tally to 275,364
Acer starts the year off strong with the Aspire Vero National Geographic Edition
Gear up and get ready to play with Yamaha Mio Gear
Municipal court in Pangasinan sets arraignment for ‘Lolo Narding’
MOST READ
Imelda Marcos trends on Twitter after octogenarian jailed for allegedly stealing mangoes
SSS: Members on home quarantine due to COVID-19 can apply for sickness benefit
Villar backs implementation of EDSA decongestion blueprint
Help pours in for octogenarian jailed for ‘stealing’ mangoes in Pangasinan
Don't miss out on the latest news and information.